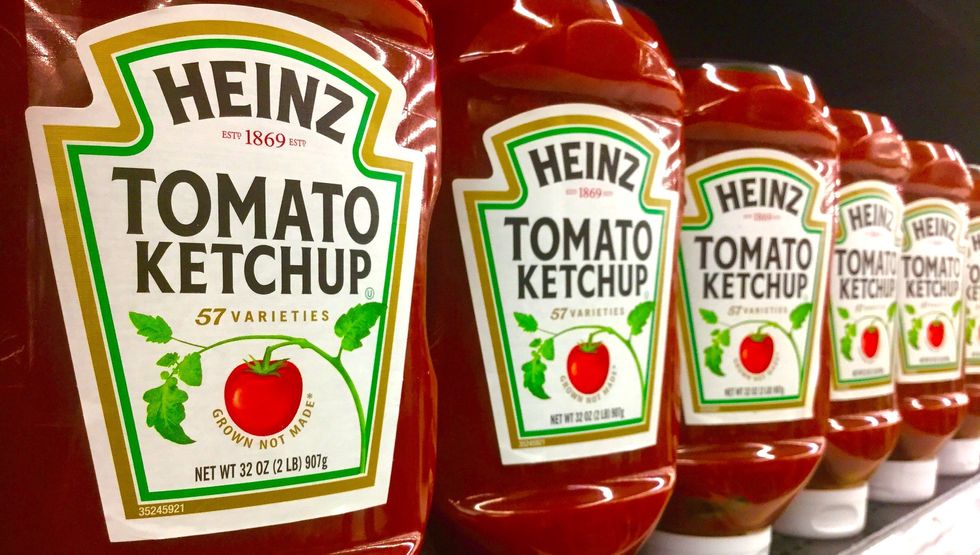 Here's a recipe for you: Chop up 6 Oscar Meyer wieners, stir in 1 cup of Heinz ketchup, blend with 1/2 cup each of Cool Whip and Maxwell House Coffee, sprinkle a 1/2 cup of Planters peanuts over the mixture, add 3 spoonfuls of A.1. Steak Sauce and then top it off with a jar of Cheez Whiz and blast it in the microwave.

Sound like a gloppy mess? It would be if anyone could stomach the idea of making it, but an even messier version of the glop was cooked up in 2015 by corporate profiteers. That's when Kraft Foods Group was merged with H. J. Heinz, thus conglomerating more than 200 brand-name food products -- including all of the above -- into one $28 billion-a-year behemoth. The combination was hailed at the time as a whiz-bang deal, a product of sheer corporate and financial genius that would generate extraordinary efficiencies, growth and profits, proving that bigger is always better.

Um ... apparently not. Four years later, Kraft Heinz's sales have slumped, profits are tumbling, its stock price has plummeted by half in the last year, investors are bailing out, its products are losing market share, shareholders are suing, regulators are investigating, employees are increasingly dispirited, and ... well, as some business journalists have put it, the megamerger is a megamess.

This is not the work of inexperienced, incompetent corporate managers inside Kraft or Heinz but of a couple of highly touted Wall Street "geniuses" who've amassed personal fortunes in the global corporate merger game. The Kraft Heinz consolidation was engineered from outside by a Brazilian corporate takeover outfit named 3G, in cahoots with U.S. buyout buccaneer Warren Buffett. They are ideological disciples of the old orthodoxy that the sole responsibility of corporate executives is to jack up the stock price and profits for big shareholders -- in this case, themselves. Their self-serving approach to increasing Kraft Heinz's profits was to squeeze "costs," meaning squeezing out experienced managers, workers, product development and the vibrancy of the corporation itself -- which has steadily squeezed out their own profits.

This old model of self-enrichment through corporate takeover, consolidation and contraction turns out to be not just bad morals but bad business. It's time for us, the media and public officials to start saying "NO!" to merger mania.

Last spring, a lawn care company advertised a special deal: "$50 OFF." Off of what? In small print, the ad explained: "Off of free services."

I think of that twisted advertising hustle when I see yet another corporate megamerger being announced with great hoopla.

The grinning CEOs of the merging giants promise everything, but -- as we've learned from promises made by merging airlines, banks, drugmakers, etc. -- they'll most likely deliver less than nothing. Four years after the Kraft Heinz colossus merged, it has become a shamble, far less than either had been separately. What happened? Greed and Wall Street's cost-cutting BS took over the executive suite.

3G had been the primary driver of the Kraft Heinz merger, and its top honchos quickly replaced the previous managerial teams with their own financial hotshots, who imposed a rigid bit of business school humbuggery called "zero-based budgeting." It amounted to the practice of corporate thuggery -- cut employees, slash expenses, divert revenues to the new owners, buy up other corporations ... and repeat the plunder.

Suddenly, instead of focusing on improving products and customer satisfaction, Kraft Heinz employees were riveted on the minutia of cost-cutting. (The regime's miserliness was exemplified by its removal of company-made nut and cheese snacks that had been offered for free at employee meetings). Research and new-product development budgets were whacked, seven processing plants were closed, thousands of workers were offed, and employee morale plummeted.

In June, 3G installed a new CEO, promising to right the ship, but he seems to be offering more of the same old corporate BS. "To truly change the direction of a business like ours," he recently babbled, "we need to understand the future."

Hey, chief. First, look to your past and try to learn that you don't build by mindlessly destroying.