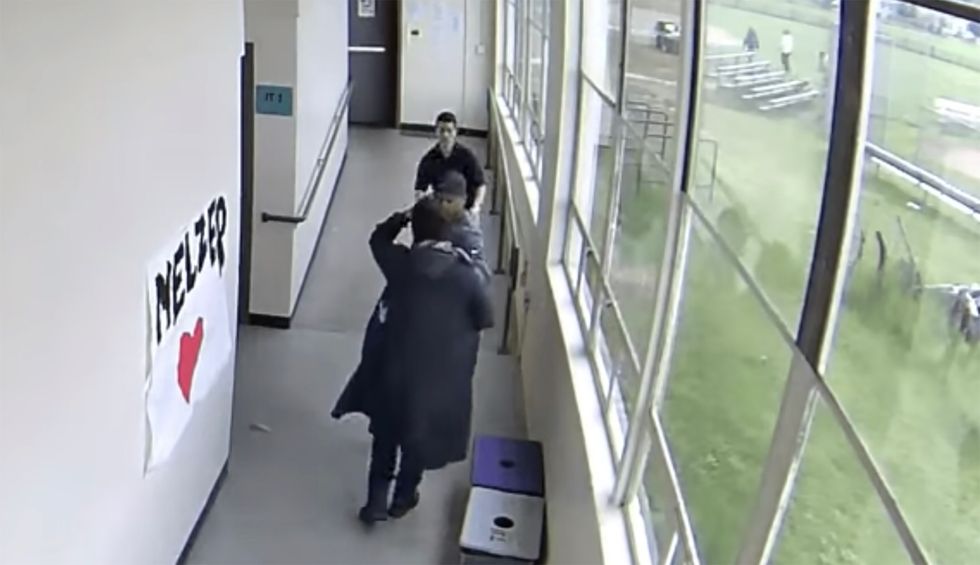 In May, the story of Keanon Lowe, a football and track coach, as well as a security guard at Parkrose High School in Oregon, who disarmed an 18-year-old student, Angel Granados-Diaz, after he had entered the school with a loaded shotgun, went viral. Lowe was, for good reason, widely praised as a hero. New surveillance footage from the moment is getting attention for a moving reason.

As reported by The Oregonian, Granados-Diaz was experiencing mental health difficulties. As the outlet reported, the student was experiencing suicidal thoughts. He was contemplating suicide but didn’t want to die at home because he didn’t want his mother to find his body. As the student’s lawyer later explained, the teenager planned to die by suicide in a school bathroom. Then, the student, who had entered the school with the loaded shotgun hidden in his jacket, went into a classroom instead, hoping that someone would call 911.

Lowe entered the classroom after a student reported that Granados-Diaz had been making suicidal statements. Later, police confirmed that the gun was loaded with one round.

“I walk in there, I get to the classroom, I’m in the classroom for 15, 20 seconds - you know, I ask the teacher, ‘Is the student here?'” Lowe recalled to KOIN. “The door opens - I’m within arm’s length of the door, about 3 feet away from the door, and there’s a kid with a gun, a shotgun. In a fraction of a second, I analyzed everything really fast."

In the video, which is embedded at the bottom of this post, Lowe is seen stepping backward out of a classroom and into the hallway while holding the weapon. Then, another teacher takes the shotgun from him before quickly going to the other end of the hallway. From here, Lowe embraces the student in a hug. The 18-year-old starts to cry. The coach doesn’t let go.

In other video footage, students are seen running.

"I felt compassion for the kid, to be honest," Lowe continued to KOIN. "Obviously, he broke down and I just wanted to let him know that I was there for him. I told him I was there to save him. I was there for a reason and that this is a life worth living."

Back in May, Lowe tweeted a thread about the situation:

When confronted with the test the universe presented me with, I didn't see any other choice but to act. Thank God,… https://t.co/F2BemURvAv
— Keanon Lowe (@Keanon Lowe) 1558208051.0

There’s a lot that’s heartbreaking here. Granados-Diaz shouldn’t have had access to a weapon. Those students shouldn’t have had to experience the trauma of possible gun violence. The gunman should have had more mental health resources before it got to this point. One thing that shines some light? Granados-Diaz didn’t die by gun violence, which is a risk that happens all too often when someone is struggling with mental health. After the weapon was removed, he was simply embraced.

"The staff member did an excellent job by all accounts,” police spokesperson Sgt. Brad Yakots stated at the time. “Our officers arrived within minutes and went right in."

In the end, no lives were taken. Granados-Diaz was initially charged with possession of a firearm in a public building, attempting to discharge a firearm at school, and reckless endangerment and possession of a loaded firearm in a public place. On Oct. 10, he pled guilty to gun charges. He’s serving a 36-month probation sentence and will receive substance abuse and mental health treatment as part of his plea agreement. According to officials, Granados-Diaz never pointed the gun at anyone but himself.

Here is the newly released surveillance footage from the school: