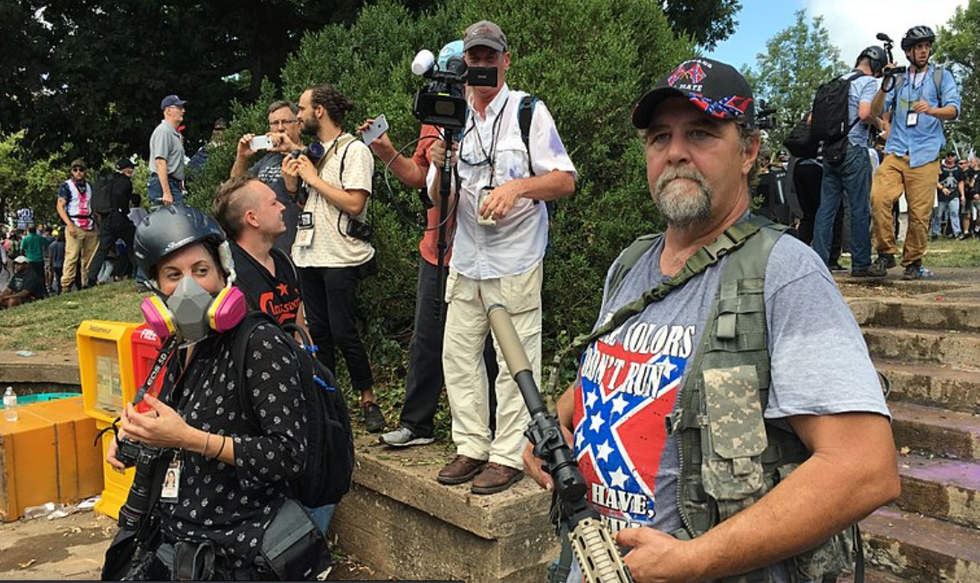 To critics of President Donald Trump — who range from liberals and progressives to Never Trump conservatives such as MSNBC’s Joe Scarborough and GOP strategists Rick Wilson and Ana Navarro — House Speaker Nancy Pelosi is making good use of the United States’ system of checks and balances by calling for an impeachment inquiry. But some of Trump’s unwavering supporters view an impeachment inquiry as an attempted coup — and that includes the Oath Keepers, an armed militia group that is taking Trump’s “civil war” rhetoric quite seriously.

Recently on Fox News, Christian Right evangelical Robert Jeffress asserted that if Democrats are successful in getting Trump removed from office via the impeachment process, it will cause a “Civil War-like fracture” in the United States. Trump took to Twitter on September 29 and echoed Jeffress’ rhetoric, posting, “If the Democrats are successful in removing the President from office (which they will never be), it will cause a Civil War like fracture in this Nation from which our Country will never heal.’ Pastor Robert Jeffress, @FoxNews.”

Some Trump apologists have argued that Trump was merely being rhetorical. But members of the far-right militia group the Oath Keepers are taking him literally.

Responding to Trump’s September 29 post, the Oath Keepers tweeted, “We ARE on the verge of a HOT civil war. Like in 1859. That’s where we are. And the Right has ZERO trust or respect for anything the left is doing. We see THEM as illegitimate too.”

In an October 2 piece for Benjamin Wittes’ Lawfare website, legal expert Mary B. McCord notes that the Oath Keepers “are far from the only militia group that vocally supports deploying potential force in aid of the president.” The Minutemen Project, McCord recalls, published an “URGENT CALL FOR TEXAS BORDER OBSERVATION DUTY” (all caps) in November 2018 after Trump vowed to send 15,000 U.S. troops to the U.S./Mexico border.

McCord also notes that earlier this year, another armed militia group, the United Constitutional Patriots, quoted Trump’s references to an “invasion” of the U.S. from Latin America and decided to “set up camp at the New Mexico/Mexico border.”

“Without any legal authorization,” McCord recalls, “this group assumed the duty of U.S. Customs and Border Protection to stop and detain migrants, all while heavily armed and dressed in military fatigues.”

The Minutemen Project and the United Constitutional Patriots, according to McCord, both “took action at least in part in response to Trump’s rhetoric about the need to secure the southern border. Now that the president has invoked the idea of civil war, there is a risk that armed groups will take heed of this language too whenever the president suggests that it is time.”