'Are you talking to me!?': Trump spits fire at reporter who refuses to back down on Ukraine scandal 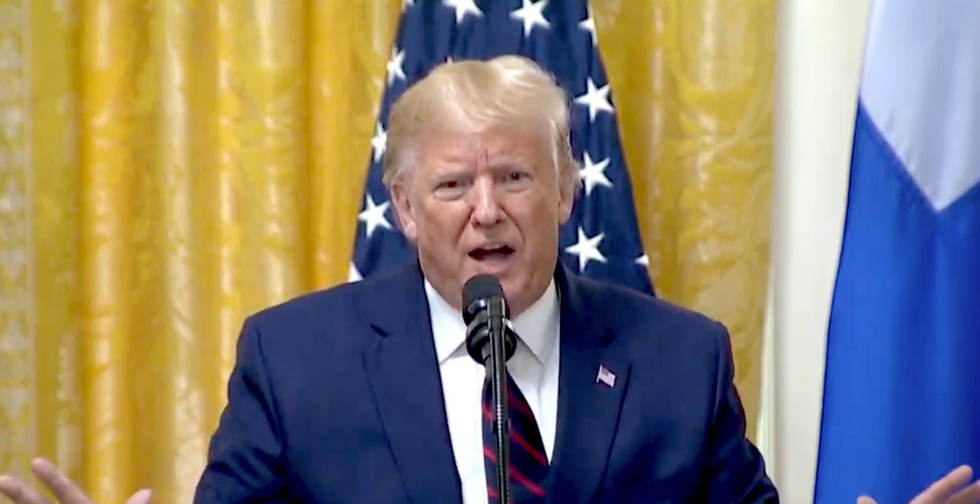 While delivering a joint press conference with Finnish President Sauli Niinistö, President Donald Trump became visibly agitated when pressed by a reporter on his conduct in the ballooning Ukraine scandal.

Jeff Mason of Reuters said: "Mr. President, can you just make clear right here what did you want President Zelinsky to do with regard to Joe and Hunter Biden?"

Trump refused to answer the question. Instead, he launched into a monologue attempting to exonerate himself, arguing that in the July 25 phone call with the Ukrainian president that it was Zelensky who first brought up Rudy Giuliani, who has been carrying on a months-long pressure campaign to induce the foreign power to criminally investigate the Bidens. Of course, Trump didn't mention that Giuliani was working on his behalf, and it's hardly exonerating that the topic of Biden came up with regard to his personal lawyer's previous activities. He also argued that Zelensky has claimed he didn't feel any pressure from the call — but this is exactly what Zelensky would feel he'd have to say if he felt extorted by Trump.

After the rambling answer, Trump was pressed again on the Bidens.

"Biden and his son are stone-cold crooked, and you know it. His son walks out with millions of dollars, the kid knows nothing," Trump said. "You know it, and so do we."

"The question, sir, is what did you want Zelensky to do about Vice President Biden and his son further?"

Trump backed away from the microphone, apparently thinking the question was for Niinistö. Then he realized it was for him, and exclaimed: "Are you talking to me?!"

"Yeah, it was a follow-up of what I just asked you, sir," Mason said.

"We have the president of Finland!" Trump said. "Ask him a question."

"I have one for him," said Mason. "I just want to follow up on the one that I asked you, which was what did —"

"I've given you a long answer," Trump continued. "Ask this gentleman a question. Don't be rude."

"No sir, I don't want to be rude. I just wanted you to have a chance to answer the question that I asked you," said Mason.

"I've answered everything! It's a whole hoax!" Trump shot back. "And you know who's playing into the hoax? People like you and the fake news media that we have in this country. And I say, in many cases, the corrupt media."