'Are you really not capable of answering a question?' CNN's Tapper hammers GOP senator ranting about Mueller and Biden when asked about Trump's Ukraine scandal 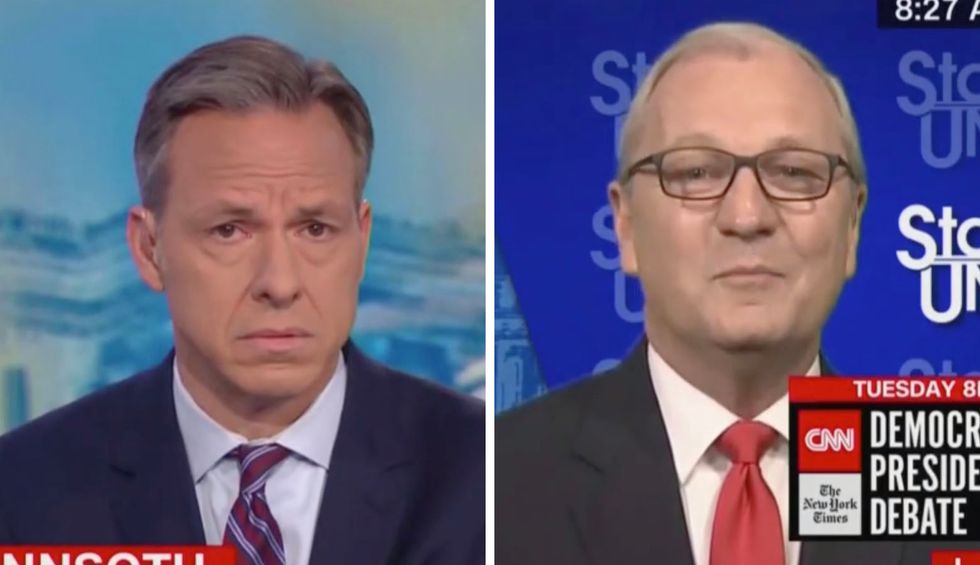 “As a hypothetical, just because I think there are a lot of people concerned about the precedent this is setting, would you have found it acceptable if ahead of the 2012 election then President Obama had asked a foreign leader to investigate one of Mitt Romney’s sons? Would that be okay with you?” Tapper asked Cramer.

Cramer bizarrely referenced special counsel Robert Mueller’s investigation into the 2016 presidential election, insisting “the corruption involves a former vice president” and “rooting out corruption in other countries was something that Democrats thought they were doing with the Mueller investigation.”

“There is no evidence of corruption in this case,” Tapper reminded Cramer of Hunter Biden's work in Ukraine.

“Well other than the vice president bragging in front of a video camera about holding up a billion dollars worth of military assistance to Ukraine and unless or until such time as they call off an investigation into his son’s—“ Cramer began, but Tapper cut him off.

“That is not what happened,” Tapper said. “Joe Biden and the Obama Administration and the European Union and the International Monetary Fund and the World Bank and anti-corruption crusaders wanted this one prosecutor that was not moving on corruption. They all wanted him fired.”

“So there is no evidence of corruption,” Tapper continued. “I understand that there is an appearance of impropriety, a conflict of interest, and that is a fine allegation for people to say. But that is not what you just said.”

"But my question is do you think it is appropriate for a politician to use his position in foreign policy to push a foreign leader to investigate a political rival,” Tapper restated. “Yes or no, is it appropriate or not appropriate?”

Cramer responded that Trump’s “great integrity in his authenticity” “is something the people out here in the heartland appreciate about him.”

“There was no quid pro quo in the phone conversation [between Trump and Ukrainian President Volodymyr Zelensky],” Cramer claimed. “So no doubt that the haters will going to hate and try to create this narrative for — forever and ever. but ignore the fact that for two and a half years we had to endure a Mueller investigation and a Russian collusion investigation that proved to — to exonerate the president.”

“I don’t know that it exonerated him but beyond that,” Tapper replied. “I’m talking about this precedent that a lot of people are concerned about. And in terms of the quid pro quo, I don’t think it is been established there was no quid pro quo. We’re going to have testimony later this week from the Ambassador to the E.U. About whether or not there was a quid pro quo … I certainly think it is worth investigating. Don’t you?”

“Well, if it is, then certainly worth investigating whether Hunter Biden used his status as the son of the vice president to fly around the world on Air Force two and gain all kinds of government contracts and — or positions with companies that he has no qualifications to serve for and getting a large paycheck as a result of it,” Cramer shot back. “It’s all worthy of investigation.”

Cramer lamented a lack of decency in the United States, but insisted he doesn’t think Trump plays a role in the nation’s toxic dialogue.

“I think we have a far too divided country reflected in our politics and I would much rather see us have a more balanced approach to things,” Cramer said. “Obviously more dialogue, more things like what you and I are doing now than these rallies that are surrounded by riots. We have a problem in our country in terms of our dialogue, and we need to fix it. Whether that comes from the top down, I suspect it is more likely to come from the bottom up and I hope that is what happens.”