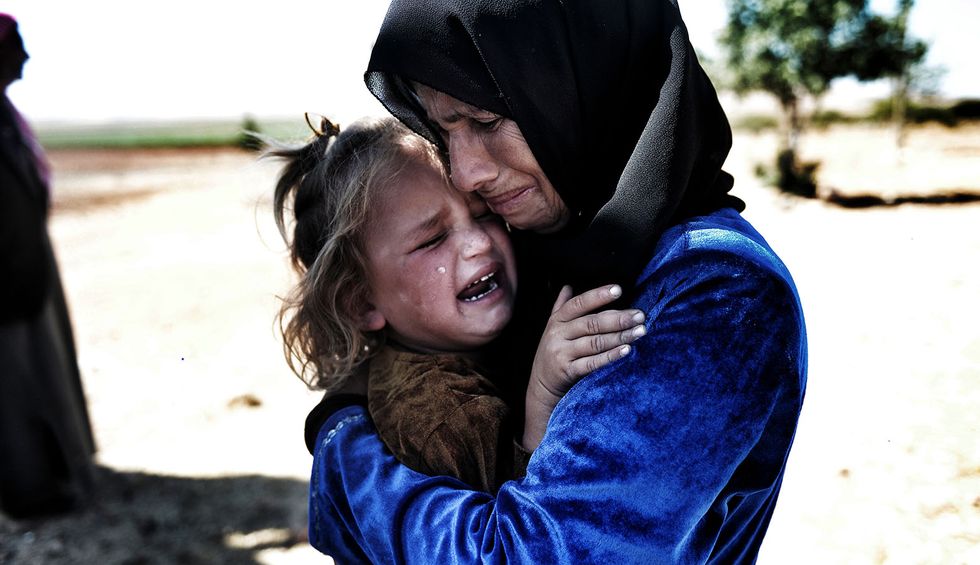 Turn on any US cable news network or click on any mainstream media news story about the Turkish offensive in Syria and you"ll see lots of worrying about civilian casualties. On the first day of the Turkish campaign, all the major networks covered the mass exodus of Kurds facing imminent bombing and invasion, with most also airing the first reports of Kurdish civilian casualties. Everywhere we see expressions of concern for the innocent Kurds caught in the path of Turkey"s onslaught.

There was no such concern in 2014 when the United States began its five-year bombing campaign against Islamic State (IS) in Syria and Iraq. Mainstream media outlets that regularly reported war crimes and mass slaughter when they were committed by IS fighters, Syrian government forces or Russian air strikes were suddenly silent as US and coalition bombing and, later, ground attacks killed thousands of Syrian and Iraqi men, women and children, to the point where for several months in 2017 US-led forces were killing more Syrian civilians than IS, Russian bombing or even Syrian President Bashar al-Assad"s forces. Even reliable alternative media outlets like Democracy Now only occasionally reported civilian casualties, even though they were happening almost every day.

Human rights monitors including Syrian Observatory for Human Rights (SOHR) and Airwars have been publishing daily reports of civilian casualties caused by all belligerents in Syria and Iraq for years. These groups compile casualty lists from local media and monitor groups and are highly credible sources. Their reports are, however, almost completely ignored by the US corporate media. With the exception of a relative handful of high-casualty incidents—like the time in March 17 when more than 200 people were killed when US warplanes bombed an apartment building in Mosul, Iraq—American media focus almost exclusively on US military casualties, with civilian deaths usually little more than an afterthought when they are mentioned at all.

While it is impossible to say exactly how many civilians have been killed by US-led bombing over the past five years, SOHR has counted 4,036 Syrian civilians killed by coalition forces since the bombing began. That"s about 3.5 percent of all civilian deaths in Syria"s eight-year civil war. Airwars estimates at least 8,214 and as many as 13,125 Iraqi and Syrian civilians have been killed in more than 34,000 coalition attacks over the past five years. Earlier this year, the Iraqi High Commission for Human Rights (IHCR) said around 11,800 civilians, including some 2,300 children, had died in US-led strikes since 2014. Entire cities like Raqqa in Syria and Mosul, Iraq were destroyed in the US-led offensive to liberate them from IS, with almost no reporting on US corporate TV news and only somewhat better online reporting.

Why are US mainstream media outlets so loth to report civilians killed or wounded by US bombs and bullets? First, they"re American, and one of the many truths that Americans hold self-evident is that "we"re the good guys." This mythology is upheld by the US military, which in addition to undercounting civilian casualties—the Pentagon claims coalition forces have only killed about 1/10th as many civilians as Airwars" high-end estimate—always asserts that US troops take great pains to avoid harming innocents. US officials also often deny credible casualty reports until presented with overwhelming evidence. Casualty counting in active war zones is also a perilous undertaking, with many reported casualties difficult or sometimes impossible to verify.

Self-censorship is also at play here. Journalists who ask too many tough questions tend to lose access to the people making the most important decisions. During times of conflict, there is also a tendency to rally around the flag that can be taken to such extremes that some of the nation"s most vaunted publications shamefully act as mouthpieces for government talking points and even cheerleaders for war for the war du jour. This is by no means the exclusive province of conservative media—witness Brian Williams, the disgraced NBC Nightly News anchor turned MSNBC host who gushed how he was “guided by the beauty of our weapons” as Trump launched cruise missiles at Syria. Williams was misinterpreting lyrics by the late, great Leonard Cohen, who surely rolled over in his pine box coffin upon hearing Williams" words. Speaking of that cruise missile attack, so-called liberal media outlets across the nation approvingly asserted how, at long last, Trump was finally acting “presidential” by escalating an already dangerous conflict.

Finally, there"s the elephant in the room: the vast bulk of US mainstream media outlets are corporate-owned, with much of the American ownership class having vested interests in waging war. And so while reporting on individual wartime triumphs and tragedies is permitted, asking why the US has been at war for this entire century, or pointing out that the United States military has killed more foreign civilians than any other armed force on the planet since dropping two nuclear bombs on Japan in 1945, seems strictly verboten. There are exceptions. But on the whole, it"s as Keith Olbermann once said, "you can rock the boat, but you can never say that the entire ocean is in trouble. You cannot say… there"s something wrong with our system."

As the Turkey escalates its attack on America"s (yet again) abandoned Kurdish allies, you can expect to see heart-rending images and reports about the innocent men, women and children killed and maimed in the campaign. The same goes for the next time Syrian or Russian forces go on the offensive. However, if coverage of civilian casualties caused by US action is what you"re after, you"ll have to look to foreign or alternative media sources. After all, as US General Tommy Franks flippantly declared before the invasion of Iraq, “we don"t do body counts.”