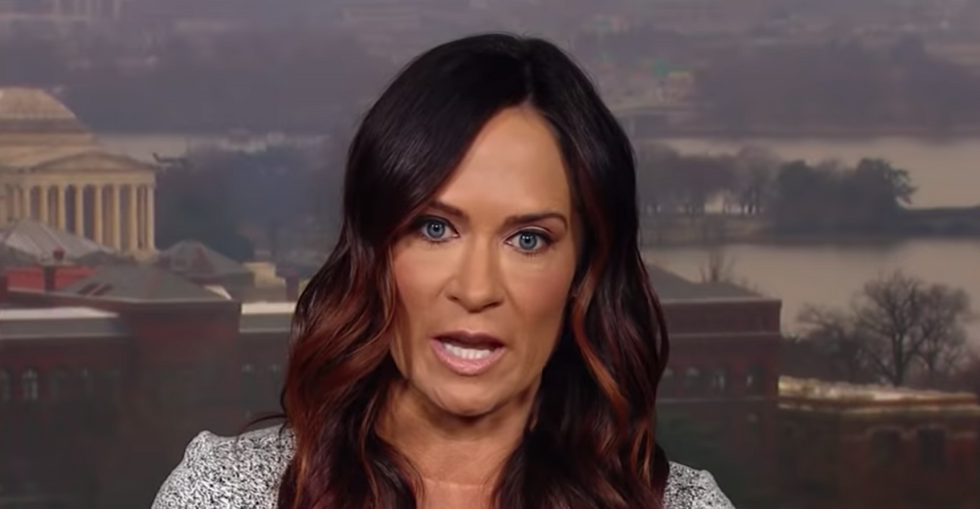 Add it to the list of long-standing norms that the Trump White House has shredded: Press secretary Stephanie Grisham has aggressively positioned herself not as an administration conduit for the press corps, but as an open and hostile enemy of newsgathering, in a way that even surpasses Sarah Huckabee Sanders' dangerous tenure in the position. And Grisham's doing it while collecting a weekly paycheck from the government, an outrageous use of public funding.

It's a point CNN's Brian Stelter recently made in his media newsletter, and it's one that's worth repeating over and over: Why are taxpayers funding a government smear campaign against the free press in this country? Conservatives, of course, have been bashing the media for decades, decrying the so-called liberal media bias. But that's most often been done by outside groups or elected officials. Having the White House press secretary actively join the scrum represents a deeply dangerous development.

Is it an exaggeration at this point to dub Grisham the Minister of Misinformation? Not really, because that's now clearly her job description. Grisham hasn't overseen a single White House press briefing since taking over the position, and it’s doubtful she ever will. She's done just two off-camera "gaggle" sessions with reporters, and only one television interview to date.

Yes, taxpayers today are funding an army of Trump-appointed officials who prevaricate and cover up for a living. But to have the White House press secretary so obviously and gleefully join those ranks of hit men and women is a rather stunning development, considering what the role of the White House press secretary has been for more than half a century. Believe it or not, for decades the press secretary was seen not as a partisan hack (as Grisham is under Trump), but as someone who served both the president and the American people by trying to shed light on White House activities—and do it in a truthful fashion.

Today, Grisham clearly functions not as an ambassador to the press or to the public, but as an attack-dog staffer for Donald Trump’s re-election campaign, which has made it quite plain that it's going to run against the media in 2020.

Politico last week reported that Grisham "flashed signs this week of how she'll serve as Donald Trump's defender-in-chief," and that her attacks on the press "represent a departure from her predecessors' approach to the role of press secretary." But that weak description doesn’t go far enough in terms of communicating the radical transformation of the White House press secretary role that's currently underway.

"Defender-in-chief" sounds like a good thing, right? Every president should have his or her stalwart defenders. But that's not at all what's unfolding. What's unfolding is a drastic escalation of Trump's obsessive and dangerous attacks on the press. Grisham's not simply defending Trump; she's trying to undermine newsgathering, and she's doing it in a patently dishonest and vengeful way. That means there's zero good-faith discussion to be had from the Trump White House about its press coverage.

That was obvious when Grisham co-wrote a poorly reasoned editorial in the Washington Examiner attacking The Washington Post's coverage of Trump. Its main thrust was that the Post constantly failed to report on all the good things Trump had done this summer. Yet in her piece, Grisham actually linked to Post articles about topics she claimed the Post wasn't covering.

The following day she lashed out on Twitter, once again complaining that the Post hadn't covered key news initiatives that the White House was proud of. And once again she was proven wrong when journalists linked to the Post's coverage of the supposedly ignored initiatives. So she's clearly not a serious person, and she's been recruited to be part of Trump's deeply unserious and dangerous crusade against the press.

Over the summer, Grisham authored a 20-page report arguing that White House reporter Brian Karem should have his credentials suspended. She argued that Karem had violated White House rules by being disruptive at a July 11 Rose Garden event, an event at which former Trump aide Sebastian Gorka loudly called Karem a "punk." In her report, Grisham claimed that a Secret Service agent had to intervene because the spat became so ugly. But it turned out there was no record of a Secret Service agent who ever got involved. The reporter filed suit to get his credentials reinstated; Grisham and the White House lost the Karem case in court.

Over time, we've seen a slow, steady deterioration in Trump’s press secretaries. Initially, Sean Spicer tried to function as a traditional press secretary within the confines of Trump's irrational ways, meaning that Spicer at least went through the motions of holding semi-regular press briefings. Sanders then segued into something much more destructive, by openly and quite often lying to reporters, proudly carrying Trump's "fake news" banner, and essentially canceling the press briefings.

And now Grisham completes the reckless transformation of the White House press secretary from a top official whose job it is to interact with the press in a professional and honest way to someone who's out to destroy the trust and confidence in the free press in this country. It's now been six months since the last press briefing. And it's actually worse than that: There's been just one press briefing since Jan. 28, and just two in the past 10 months.

Do you recall that White House reporters shamefully arranged to have drinks with Sanders as part of a fond farewell party? They lifted their glasses to a press secretary who hadn't held a White House press briefing in 100 days, and who lied to them. Please tell me that, one day, the White House press corps won't throw Grisham a going-away party, too.