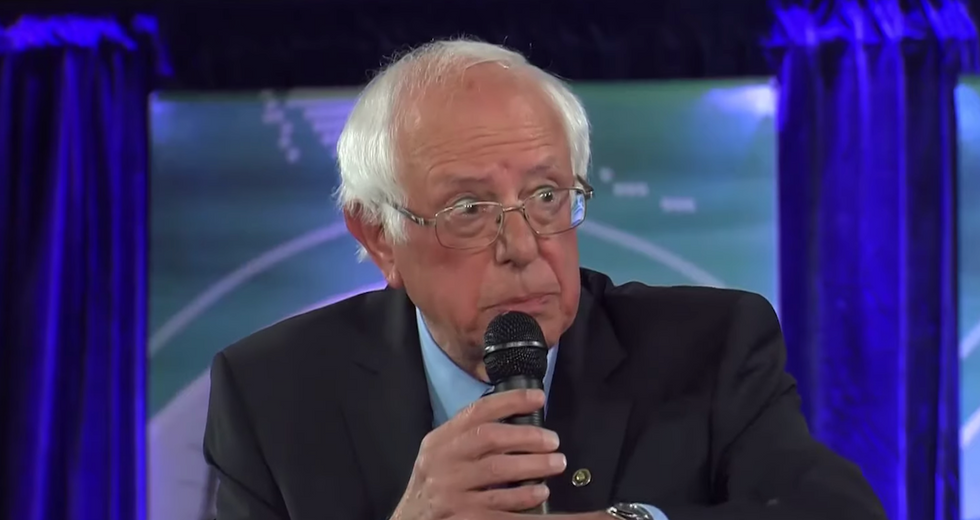 During an MSNBC climate town hall at Georgetown University on Thursday, Sen. Bernie Sanders said, if elected president in 2020, he would pursue criminal charges against fossil fuel executives for knowingly accelerating the ecological crisis while sowing doubt about the science to the American public.

"Duh, of course I would," Sanders said when asked by MSNBC's Chris Hayes if, as president, he would take legal action against fossil fuel companies.

"They knew that it was real," Sanders said, referring to fossil fuel CEOs' awareness of the climate crisis. "Their own scientists told them that it was real. What do you do to people who lied in a very bold-faced way, lied to the American people, lied to the media? How do you hold them accountable?"

"What do you do if executives knew that the product they were producing was destroying the planet, and they continue to do it?" the senator continued. "Do you think that that might be subject to criminal charges? Well, I think it's something we should look at."

Sanders drew a comparison between the production of fossil fuels amid the climate crisis to the mass production of addictive opioids, which sparked a deadly nationwide epidemic:

You're producing a product... and then you learn that the product you're producing is killing people, right? Which is the case, say, with the Purdue and Johnson & Johnson opioid manufacturers.

The evidence is pretty clear that in terms of Purdue and Johnson & Johnson, they learned at a certain point that the opioids they were producing were causing an epidemic and people were dying. And you know what they did? They continued to produce it and hire more salesmen to go out and sell it. What do you do to those folks.

How do you hold fossil fuel executives who knew that they were destroying the planet but kept on doing it?

"President Bernie Sanders will ensure that his Department of Justice and Securities and Exchange Commission investigate these companies and bring suits—both criminal and civil—for any wrongdoing, just as the federal government did with the tobacco industry in the 1980s," reads Sanders's website. "These corporations and their executives should not get away with hiding the truth from the American people. They should also pay damages for the destruction they have knowingly caused."

Jack Shapiro, senior climate campaigner with Greenpeace USA, said in response to the senator's proposal, "If fossil fuel executives and lobbyists reading Sanders' plan are scared, they should be."