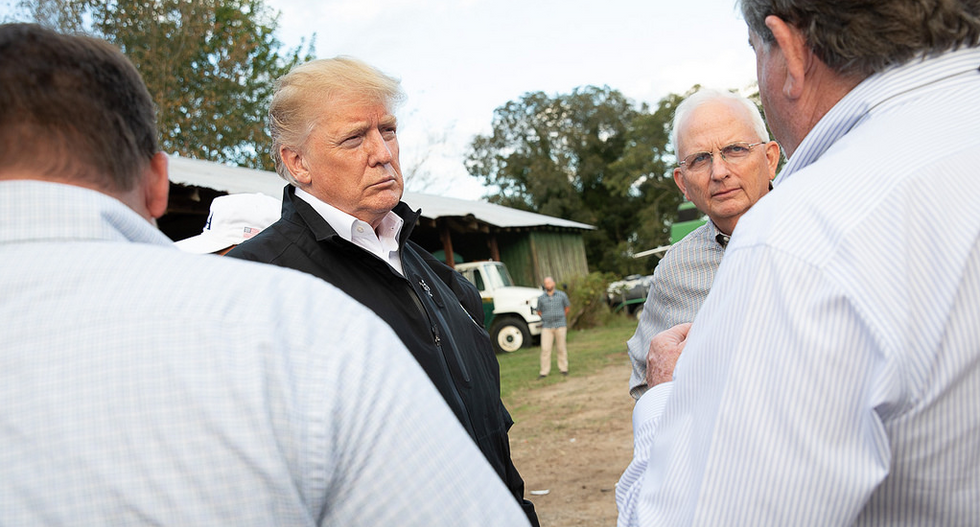 Donald Trump's trade war with China has so devastated American farmers that the administration's bailout to try ease their pain has ballooned to an epic $28 billion, and now even some White House officials are balking at the figure.

Last year, the U.S. Department of Agriculture used a New Deal-era vehicle to authorize an initial $12 billion in bailout funding, and this year the agency added another $16 billion. The monies are being distributed through the Commodity Credit Corporation (CCC), which has never been used to deliver such large sums for such an expansive program. Even the White House Budget Office reportedly requested further legal grounding for the funding after the USDA sent its request for the second round of allotments. USDA attorneys have signed off on the second installment, according to The Washington Post.

Naturally, Trump sees no problem with the massive bailout and has also tweeted that he would "do it again next year if necessary!” White House aides are also pressuring Congress to raise the $30 billion legal limit on what can be distributed through the CCC program. Whether Congress ultimately does that remains to be seen.

But legal issues aside, the bailout is being distributed in the shoddiest fashion possible, because Trump doesn't do any work unless it's shoddy and/or illegal. “They’re doing it really fast and shorthanded,” a former USDA official told the Post. “The agencies implementing it are stretched thin, and there’s immense political pressure to get the money out quick.” So far, about $11 billion of the first pot of money has gone out the door and another $2 billion of the second pot has been distributed.

But even if the government is temporarily able to relieve a little bit of the sting from Trump's misbegotten trade war with China, the long-term effects on farmers' bottom lines will likely be felt for decades.

In fact, some farmers watching Trump's trade war are reminded of 1980, when President Jimmy Carter banned selling wheat to Russia. The country turned around and became a major wheat producer and exporter, competing with U.S. farmers for the very same markets they once dominated.

"The thing about the Russian wheat embargo, we are still paying for that today," Illinois farmer David Droste told Crain's Chicago business journal. "That's how long-term this could be if it's not resolved."