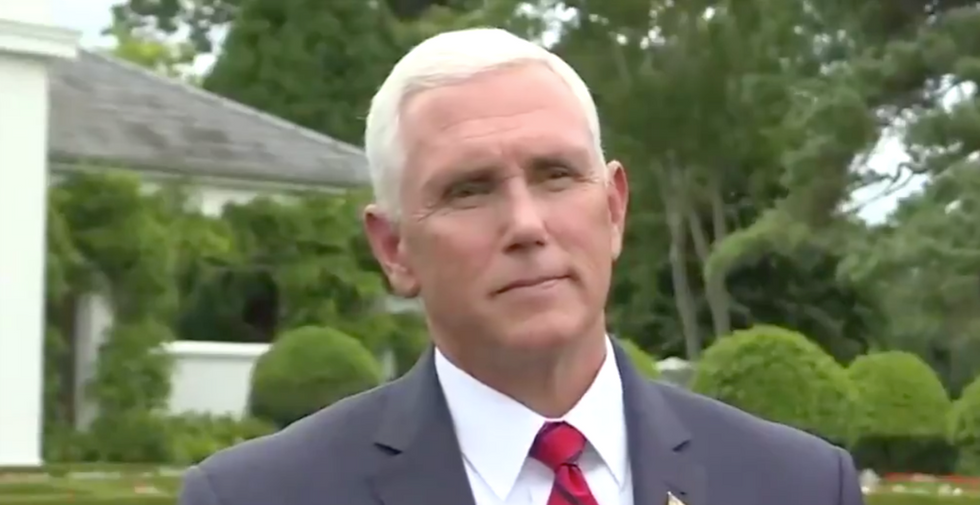 Open corruption is par for the course in the Trump administration, so it should be little surprise that Vice President Mike Pence is staying in the president's own golf course during his trip to Ireland.

Still, the details of this particular incident of open graft are galling and revealing.

Speaking with reporters on Tuesday, Pence's Chief of Staff Marc Short admitted that — quelle surprise! — staying at the golf course was the president's idea.

"It's like when we went through the trip, it's like, well, he's going to Doonbeg because that's where the Pence family is from," Short said, as NBC News reported. "It's like, 'Well, you should stay at my place.'"

However, Short insisted that it was a "suggestion," not a command. Of course, this may well be true, but a suggestion from the president, who has been rumored to be in the market for a new vice president in 2020, may easily be taken as an explicit command. And even if it wasn't a command, it may be taken as a chance by Pence to show his loyalty to the president. The rumors of Pence leaving the ticket in 2020 are almost certainly false, but the vice president himself may have enough doubt about his position to avoid risking it. And by staying at the golf course, he shows loyalty to the president in two ways: he funnels money directly to Trump, and he shows he's willing to endure the inevitable criticism and wear the stain of corruption this choice entails, which further binds his fate to the president.

Regardless, even if Trump never mentioned the club to Pence, it would still be a blatant conflict of interest to stay there. It's bad enough that the president has made the unprecedented choice to keep running businesses while serving in office, a move that opens him up to myriad opportunities for corruption and conflict of interest. But he compounds this egregious breach by repeatedly and consistently directing his administration's resources to his businesses, siphoning taxpayer money into his own pockets.

That's why one of Short's claims in defense of the stay wasn't a help at all.

"Keep in mind, the Secret Service has protected that facility for him, too, so they sort of know the realities, they know the logistics around that facility," Short said, not seeming to realize that this just emphasizes how egregiously corrupt the Trump administration is that this isn't the first time the Secret Service has been to Trump's Irish club.

Short also confirmed that the federal government is paying for the stay, as it typically does when Trump or his officials go to his businesses.

NBC News also noted that, while Pence has family ties to Doonbeg, where the club is located, and he was planning on visiting the village at the end of his trip, it's actually not a convenient location for the vice president's official business:

Rather than stay in Dublin, where he is set for a day of meetings and events with Irish officials, Pence is making the back-and-forth trip from Doonbeg to Dublin, more than an hour flight each way.

The flights back and forth, of course, are an additional government expense incurred by Pence's decision to stay at the golf course.

Pence tried to defend the move, telling reporters: "If you have a chance to get to Doonbeg you'll find it's a fairly small place, the opportunity to stay at Trump National in Doonbeg, to accommodate the unique footprint that comes with our security detail and other personnel made it logical."

But it's hard to square this idea with the fact that Pence will have to be flying an hour each way with the claim that it was "logical" to say there. For reference, it's about an hour to fly from Boston to New York. Would anybody think it's "logical" to stay at a Boston hotel for a conference in Manhattan?

And again, even if the club were an optimal location for Pence to stay, he should still avoid it on principle to not raise the possibility of the conflict of interest.

This is all an absurd joke. No one should have to explain this to politicians — this is corruption 101: Don't use government funds for personal profit. There's not really any debate here. But Trump has so warped the political discourse that even obvious scandals are treated by his defenders, supporters, and enablers as unfair criticism. Meanwhile, the Cabinet has become such a hotbed of corruption that any fresh revelations barely sound like news.

The most infuriating thing about Trump's spending on his businesses, however, is that it's nothing new. As Vox's Matt Yglesias argued Tuesday, Trump has been brazenly paying himself from U.S. government funds — i.e., stealing from taxpayers — since he entered office. But Republicans don't care, and Democrats seem unable to do much about it or even raise much of a fuss. But under normal circumstances, this kind of behavior alone should be enough to bring any public official down.