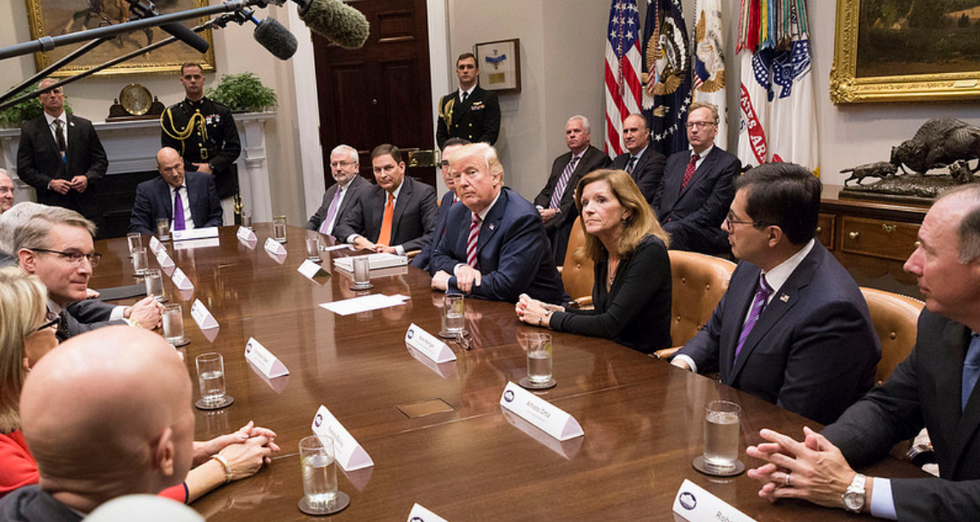 American consumers could soon be forced to pay double for some of the most desirable European products if the Trump administration gets its way.

The Trump administration has proposed a tariff of up to 100 percent on $25 billion of European products, including cheese, wine, meats, olive oil and pasta, CNN reports.

The newest front of Trump’s trade war is related to a years-long dispute between the U.S. and the European Union over subsidies for airplane manufacturers. In 2004, the EU accused the U.S. of unfairly giving $19 billion in subsidies to Boeing. The U.S. responded by filing its own complaint to the World Trade Organization, accusing the EU of giving unfair subsidies to European manufacturer Airbus. Since taking office, Trump has proposed new tariffs on Europe in the dispute. The WTO is expected to rule on the scope of allowable tariffs this month.

Retailers say that the tariffs would result in soaring prices that could cripple thousands of American businesses. Roughly 14,000 specialty food retailers and 20,000 other food retailers could be hit by the tariff, according to the Specialty Food Association.

Food importers would be hit hard too. Tom Gellert, whose company owns five food importers, told CNN that businesses would likely be forced to stop selling European products affected by the tariffs.

"100 percent duties would be really devastating,” he said. “We're going to make these items so expensive and so unmarketable we won't import them anymore.”

Lou Di Palo, the owner of Di Palo’s specialty shop in New York’s Little Italy, told the outlet that 95 percent of the products in his 109-year-old store would be affected.

"Products that we sell are already kind of expensive,” he explained. “For instance, Parmigiano Reggiano and Grana Padano. These are cheeses that sell between $15 and $20 a pound. Could I get $30 and $40 a pound for this cheese? It's going to be very difficult.”

The tariff could also affect the supply of common staples like olive oil. Trump has claimed that the goal of his tariffs, aside being leverage in trade negotiations, is to bring manufacturing of products back to the United States. But a bipartisan group of lawmakers has asked the administration to reconsider imposing a tariff on olive oil, arguing that the duty would cause “significant domestic harm” because there is no “sufficient alternative supply of olive oil.”

"Large price increases can push many consumers and food manufacturers to choose food oils that lack the health qualities of olive oil, as well as increase the incentive for unscrupulous actors to sell misbranded olive oil," they wrote.

Production of other products like cheese and wine could move to the United States, but Di Palo noted that the milk and grapes used in the products are region-specific and have profiles that give them their unique flavors and textures.

“The authentic wines of Italy, the authentic cheeses, oil, salumi. This is very important to us,” he told CNN.

One company that could benefit from the tariff is the Trump Winery in Charlottesville, Virginia. The winery is owned by Eric Trump, the president’s son. Some of its wines have been described as “Welch’s grape jelly with alcohol.”

Along with European food products, Trump has also threatened to impose tariffs on European cars. He has already imposed steep tariffs on steel and aluminum imports, washing machines and solar panels, as well of hundreds of billions of dollars worth of products from China, Europe, Canada and Mexico. Trump has frequently complained that the U.S. has a trade deficit with the rest of the world, but those deficits have only grown since he took office. The trade deficit with China, the European Union and Mexico has grown by more than 23 percent and the trade deficit with the rest of the world has increased by nearly 25 percent.

Meanwhile, Americans are paying for the increased cost of goods on countless products, as well as the bailout of farmers whose businesses have been ravaged by the trade war.

A new report from the National Foundation for American Policy showed that by the end of 2019, Trump’s tariffs “will have cost the average household $1,315 over a two-year period.”

“When adding the tariffs in effect and the tariffs set to go into effect by the end of 2019, the costs of the tariffs to consumers will be $259.2 billion,” the report said. “That is, the tariffs will cost the average household $2,031 per year, and will be recurring so long as the tariffs stay in effect.”