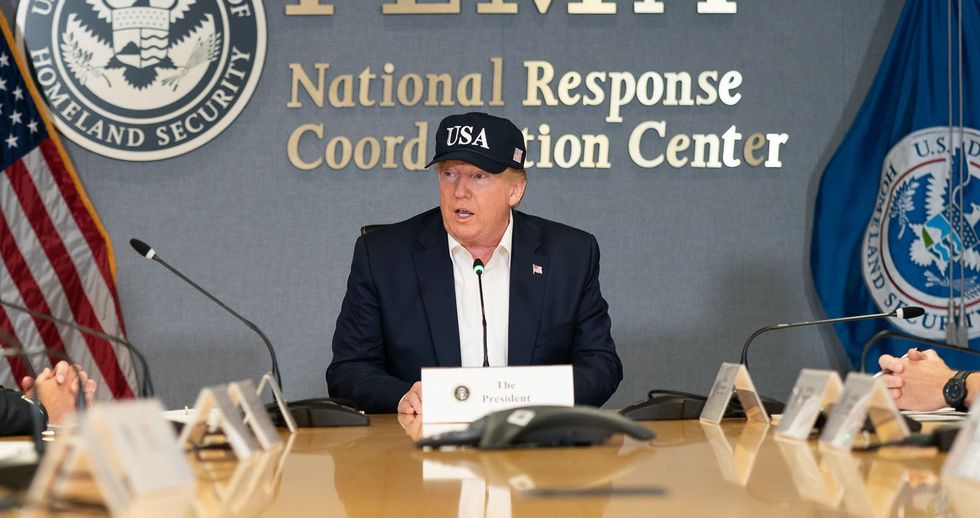 On Thursday, the president continued to insist, as he has throughout the week, that he was correct on Sunday when he said that Alabama was among the states that are "most likely be hit (much) harder than anticipated." That was wrong then, and the National Weather Service quickly corrected him. "Alabama will NOT see any impacts from #Dorian," it said in a tweet.

But he wouldn't let the claim go, even after he had been refuted. He said Wednesday that he had been given a briefing that said there was a "95 percent chance probability" that Alabama would get hit, and he even shared a doctored map that falsely extended a previous prediction of the storm's path into the state.

All of this seemed wild and over the top — he could have just admitted he misspoke and left it at that. But instead, he kept digging his heels in. Then throughout Thursday, he tweeted more maps supposedly proving his initial remarks correct. (They didn't.)

Then, he dragged Rear Admiral Pete Brown, a homeland security and counterterrorism advisor, into the issue, putting out the following statement from the White House:

The statement, again, did not confirm his initial tweet or subsequent defenses. Even if the statement is entirely true — which can never be assumed from this White House — it says the president was apprised of the possibility of "tropical force winds" in a portion of Alabama on the day he made his claim. Here's what a National Weather Service map, showing a 5 percent chance of such winds, looked like from that morning:

This is what the map looked like on Sunday morning when Trump tweeted that Alabama "will most likely be hit (much)… https://t.co/WRHtXr4jkh
— Eric Columbus (@Eric Columbus) 1567720167.0

The idea that Trump might have gotten confused about changing models and complex predictions was understandable if still worrying, at first. But his complete obsession with the topic and his focus on vindicating his claims while the storm actually pummels states on the East Coast, are disturbing traits to display for an American president. It's not as bad as his neglect of Puerto Rico during Hurricane Maria and subsequent denial of an independent estimate of the death toll, but it's still not a reassuring sign of the competence or mental stability of the commander in chief.