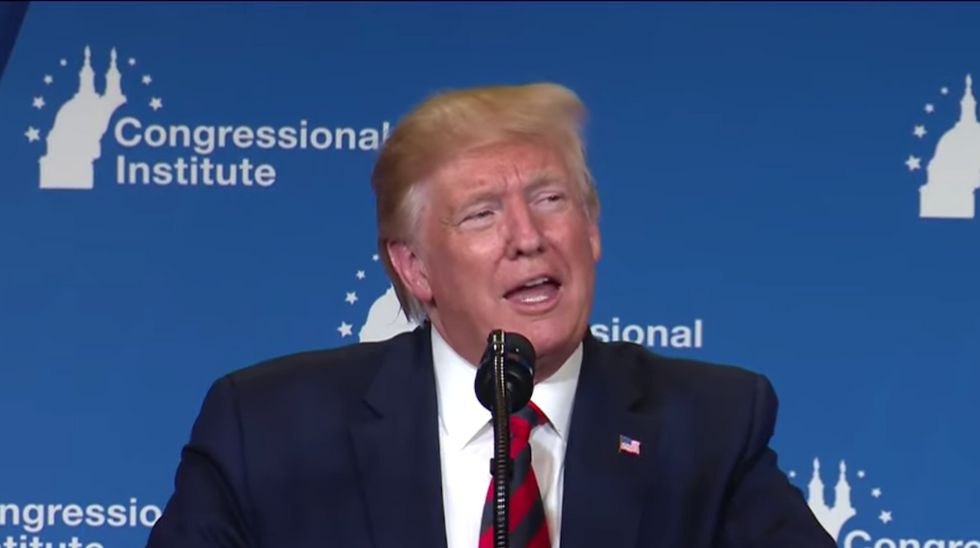 While 10 demonstrably intelligent and fully functioning Democrats were hashing through critical policy discussions about the future of the country and the globe, Donald Trump was on a stage in Baltimore, losing his marbles all over the floor while an appreciative House Republican audience ate it up.

He was on a bizarre roll all night: his envy for Texans who can wear cowboy hats all the time and not have to worry about "hairspray" and "my hair blowing, beautifully blowing in the wind"; hating energy-efficient lightbulbs because they make him "look orange"; reciting made-up conversations he had with foreign leaders; his disturbing fantasies about MS-13; and claiming that the only time our air and water was cleaner was 25 years ago, because "there was nobody here" in America then. That, and so much more, was the ad-libbing, eaten up by his Republican toadies.

But when he was on script, it wasn't a lot more coherent and certainly no more truthful. Take health care, where his only ad lib was "crazy Bernie" and the government take-over of the system. Trump vowed that Republicans "will always protect patients with preexisting conditions," which is utter bullshit. The bill he was pushing (and he got in his routine mocking of Sen. John McCain for torpedoing it) would have absolutely gutted those protections.

He ordered his Justice Department to take the almost unprecedented step of asking a court to overturn a federal law, the Affordable Care Act, that guarantees those protections. When the states who brought the case argued that those protections needed to be struck, he went the extra mile to tell the court the entire law needed to be tossed. He did so knowing there was no replacement plan in place, knowing that there wouldn't be one because his administration is completely incapable of doing it.

The 133 million people who have pre-existing conditions are more in danger from Republicans, from Trump, than they've been since 2010 when Obamacare was passed. This is sinking in, even with Trump, as the administration has started the scramble to figure out what to do if the courts do indeed give them what they asked for. It's going to come as a big shock to Trump when he finds out that saying the words "pre-existing conditions" isn't going to pull the wool over people's eyes when they lose those protections.