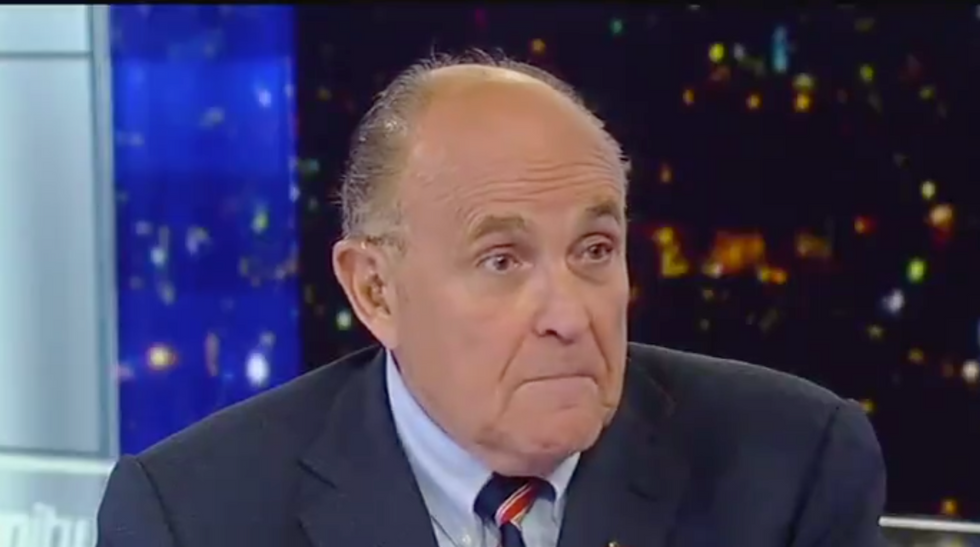 Rudy Giuliani, Donald Trump’s personal attorney, appeared on Sean Hannity’s Fox News show on Monday to try to spin away from the growing scandal enveloping the White House. Giuliani told Hannity someone from the State Department rang him up and asked him to meet with a senior aide to President-elect Zelensky of Ukraine. Giuliani neglected to mention, and Hannity neglected to follow-up, on reporting from the Wall Street Journal that Donald Trump asked President-elect Zelensky eight times to meet with Rudy Giuliani, a private citizen who has not been elected nor confirmed for any role representing the United States.

In the clip below, Giuliani basically paints himself as a patriot, saying the State Department called to ask for his help and he gave it. But, the State Department had a little teeny bit of a different take on the situation than Giuliani, one that should be causing Rudy Giuliani to start losing a whole lot of sleep.

When reached for comment, a State Department spokesperson said, "Mr. Giuliani is a private citizen and acts in a personal capacity as a lawyer for President Trump. He does not speak on behalf of the U.S. Government."

Folks, that is the sound of a bus the size of Ukraine driving right over Rudy Giuliani. You are on your own, Rudy. And when push comes to shove, just wait’ll you see the bus Donald Trump throws you under.

Rudy Giuliani just said the State Department asked him to "go on a mission" AND WHY IN THE HELL IS STATE DEPT ASKIN… https://t.co/kV7Z6rqUbY
— Andrew Lawrence (@Andrew Lawrence)1569288820.0

For the record, the statement from a State Department spokesperson is quite different than Secretary of State Mike Pompeo’s comments on Sunday talk shows. In this clip from CBS’s Face the Nation, Pompeo refused to get into the details of Giuliani’s involvement and tried to spin this back to being about Biden.

If Mike Pompeo was involved in setting up the meeting for Rudy Giuliani and the Ukrainian official, which took place away from cameras in the Spanish countryside, he’s likely going to have to answer to Congress as well.