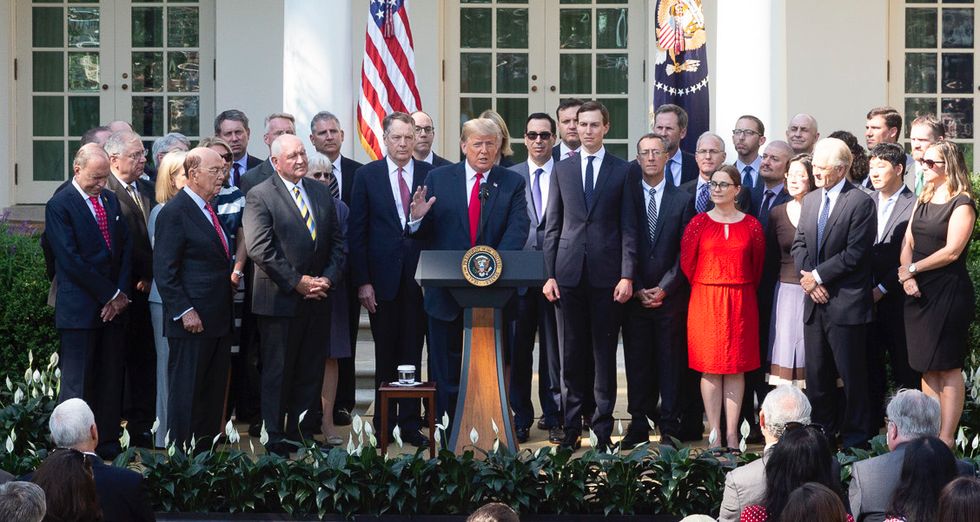 To save our republic, some of Trump’s enablers and political appointees may have to go to jail, just like happened with Nixon’s people.

Trump’s policies are inflicting massive damage on the working class, the environment, minorities, and our economy. And the damage he’s doing to our body politic will certainly alter our form of government if there aren’t legal consequences.

Trump and his cronies have shown present and future politicians how much corruption the Republican Party and the public will tolerate, and it’s a very bad sign for the future of the American experiment.

Trump has put the interests of foreign governments with whom he and his family have or hope to have business relationships above the interests of America; flagrantly violated the Constitution’s emoluments clause; welcomed foreign interference in our elections; lied to the American public and the world on a daily basis; committed campaign finance violations that landed his lawyer in prison; repeatedly broke obstruction of justice laws; and put children in cages, causing lifelong PTSD.

And that’s just since he’s been in office: his crimes from housing discrimination to sexual assault and rape to felony tax evasion to running a fraudulent university to real estate tax fraud are all, as of this moment, largely or entirely lacking any serious law enforcement oversight.

America has never before seen such breathtaking corruption in the Oval Office.

While this has rightly sparked an extended conversation about impeachment and the powers of the executive branch, a more important conversation—that’s entirely lacking in mainstream media—is about the people enabling Trump’s corruption and criminality. If he and the people enabling him are not held to account, future Trumps are pretty much inevitable.

Numerous countries have grappled with this issue in the past; the most famous are Germany after World War II and South Africa after the fall of apartheid.

It was this cycle of corruption that both the Nurnberg Tribunal and the South African Truth and Reconciliation Commission sought to interrupt. Today the Colombian government is running a War Crimes Tribunal specifically to warn future politicians and their functionaries from repeating the crimes committed during that nation’s previous administration.

In America, congressional investigations into the Teapot Dome Scandal nearly brought down the Harding administration (it was widely believed that President Harding died as a result of the stress), and Congress launched an impeachment proceeding against President Bill Clinton for lying about consensual sex with Monica Lewinsky, as then-Congressman Bob Barr of Georgia said on the floor of the House, “in order to establish a precedent that will prevent future Presidents from engaging in similar conduct.”

By holding current-day accomplices accountable all up and down the chain of command, future enablers of corrupt or despotic leaders think twice before saying “Yes” to requests to bend or break the rules.

At its core, this is the essence of the rule of law.

Trump has put people with naked conflicts of interest in charge of major government departments and in Cabinet positions, and browbeaten other federal agencies to reroute federal dollars to his businesses or lie to help him out politically.

His attorney general, Bill Barr, has outdone his corruption in the George H.W. Bush administration, and is now using the power of his office to try to force California and other states to loosen their clean air regulations in ways that will benefit the fossil fuel donors to the GOP—at exactly the moment scientists are warning that global warming could destroy human civilization.

And these are just a few of dozens of examples of the ways that enablers within our government—from Trump’s Cabinet to his Press Office all the way down the chain of command—have been willing to lie, bend or break the rules, or simply engage in highly corrupt acts to please him.

Often, as with Trump’s promotion of violence and racial hatred, these acts aren’t even explicitly illegal—they’re simply so brazen and implicitly corrupt that no other administration in the past would have considered doing them.

After the Nixon bribery scandals (there were 55 criminal convictions around Nixon, 16 each for Reagan and George W. Bush; one for Clinton and none for Carter or Obama), Congress passed legislation designed to prevent corruption and criminality by future presidents and other politicians. With five criminal convictions or guilty pleas by top Trump insiders so far, there’s little doubt that new laws or policies to restrain such behavior in the White House will be necessary when Trump leaves office.

And, like the 15 Nixon administration officials who went to prison, there are numerous as-yet-unindicted Trump functionaries who have facilitated these crimes and corrupt practices.

As I point out in The Hidden History of the Supreme Court and the Betrayal of America, candidate Richard Nixon interfered with President Johnson’s efforts to negotiate peace in Vietnam; candidate Ronald Reagan interfered with President Carter’s efforts to free hostages in Iran; and George H.W. Bush loyalists on the Supreme Court corruptly disrupted the electoral process in Florida to install Bush’s son in the White House.

If Nixon had been held to account, Reagan and Bush may not have been so brazen in their willingness to subvert American democracy for political purposes and to help their campaign donors.

Their ability to get away with such corruption to win elections paved the way for Trump’s welcoming—indeed, soliciting—help from Russia and other foreign governments to become president. And now he’s even shut down the last “cop on the beat” for the 2020 election by crippling the Federal Election Commission. Furthermore, his chief enabler, #MoscowMitch McConnell, is blocking any legislation that will prevent our election infrastructure from being hacked while forestalling consequences by injecting more manifestly unqualified or corrupt people into our judicial bloodstream than during any administration in history.

Similarly, the unwillingness of the Obama administration to investigate and publicly hold Bush and Cheney accountable for lying to the American people about Iraq and committing numerous war crimes emboldens Trump when it comes to the possibility of war with Iran or Venezuela. The choice to do little or nothing about the crimes and corruption of a previous administration, as was made by both Clinton and Obama, is also an explicit act that has its own consequences.

Trump and his functionaries are setting an example for future presidents and their administrations that goes deeper than even electoral or war crimes; they’ve turned America (hopefully, temporarily) into a larger version of a strongman banana republic. Without corrective action, future presidents will feel a strong temptation—regardless of their political party or positions—to cut corners and break laws.

When not punished, this sort of corruption echoes down generations of leaders in countries on both the right and the left; no politician is immune to temptation and pressure when working in what’s perceived as a consequence-free environment.

Now is the time to begin a conversation about how Trump’s enablers will be held to account, to bring post-Trump America back into the realm of a functioning democratic republic.