Republicans brought an 'academic' who faked his own fan to speak about gun violence in America. This Democratic senator called him out 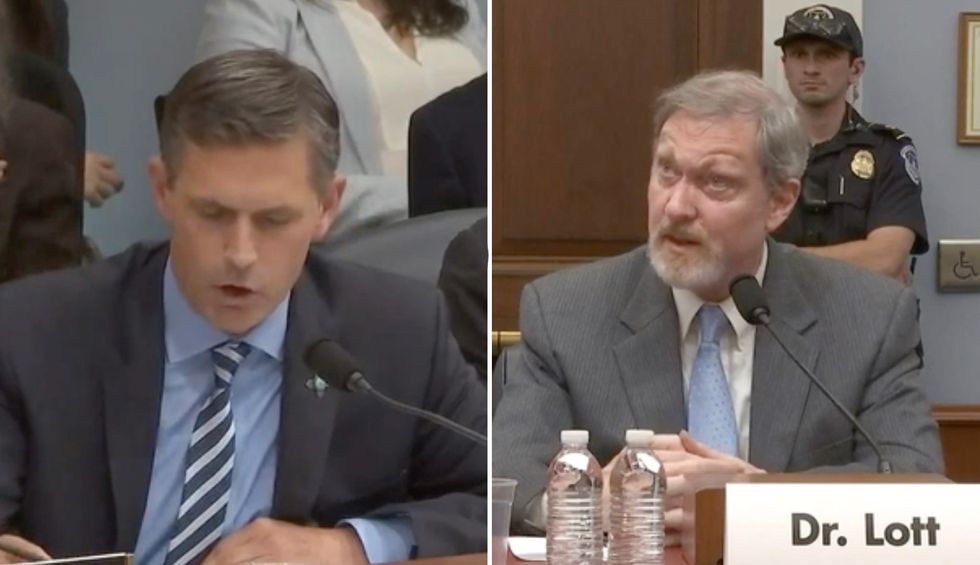 For the past 20 years, Dr. John Lott, Jr. has been the go-to person from the educated elite class who the GOP has used to fight gun legislation. On Sept. 18, Americans were again subjected to this man as he testified at the Joint Economic Committee Hearing on Gun Violence in America. Lott has written multiple books with oh-so-scholarly titles such as “Obama's War on Jobs and Growth and What We Can Do Now to Regain Our Future,” and “At the Brink: Will Obama Push Us Over the Edge?” Most of his books, however, are about guns: "Straight Shooting,” “The Bias Against Guns,” and simply, “War on Guns.”

What Lott is best known for, though, is a 1990s book entitled “More Guns, Less Crime,” which is also pretty much the synopsis of the whole thing. He claimed that states with ”shall issue” concealed carry laws have low crime rates, based on his statistical analysis of crime data. When Steven Levitt, the best-selling co-author of the slightly more popular book “Freakonomics” complained that other scholars could not replicate his findings, Lott responded by suing him.

Senate Minority Leader Chuck Schumer has never been impressed when he is invited to spew rightwing talking points, and in a 1996 letter to the Wall Street Journal editors, he offered one pretty good reason not to be a fan of Lott:

The Associated Press reports that Prof. Lott's fellowship at the University of Chicago is funded by the Olin Foundation, which is "associated with the Olin Corporation," one of the nation's largest gun manufacturers. Maybe that's a coincidence, too. But it's also a fact.

Lott’s pro-gun conclusions fly in the face of the body of respected research, which is exactly why he still gets invited to make the Republican Party’s arguments against common sense legislation to help fight the nation’s rampaging gun epidemic. By now, you’d think they’d find someone else. After the exchange below, it looks like they’ll finally have to.

JOHN LOTT, JR.: Uhhhhh ...well … it was basically the family email account that we had … basically, based on the names of my four sons at that time. It was an account the family used.

HEINRICH: Madam Chair, I would ask unanimous consent to enter an article into the record from the Washington Post called “Scholar Invents Fan To Answer His Critic.” And I’ll just read one quick quote from this article. Now this is under the name Mary Rosh, but it is speaking to various online publications and was, I believe, authored by Dr. Lott:

“I had him for a Ph.D.-level empirical methods class when he taught at the Wharton School at the University of Pennsylvania back in the early 90s, well before he gained national attention, and I have to say he was the best professor I ever had.”

Does it show good judgement for a researcher to comment that way, with regard to your own research, under a name that is clearly not transparent? I won't use the word ‘fraudulent,’ but—

HEINRICH: You're quoted in this article as saying, “I probably shouldn't have done it."

No, he probably shouldn’t have done that.

It’s hard to say what’s worse—making up a fake student/fan to praise your work, or not manning up to it when called out by Congress, and blaming your wife and kids. That’s so … Trumpian.

There are, of course, two things that Republicans hate more than anything: truth and science. That’s because the GOP has a belief system that is a part of their identity, and any challenge to that belief system is therefore a challenge to that identity. Healthy people would change their beliefs when presented with facts, but the GOP—as we’ve seen clearly with this current president—twists reality to suit their beliefs. It’s why they use the phrase the ”truth is not the truth,” and call lies ”alternate facts.” This is also why the GOP hates research and has such utter contempt for higher education.  (Don’t go to college, kids.)

If something is science, if something is reality, count on the GOP to take the opposite position; whether it’s climate change, evolution, or the fact that in just the past decade, there have been 288 mass shootings at schools in the U.S., while the rest of the world—combined —has only had 27. America’s endless supply of easily-accessible assault rifles and refusal to do even the most basic of background checks are two problems that are extremely easy to solve—if we have the will to do so. Missouri Senator Roy Blunt this week refused to even allow a study of this issue, because again, the science and data would undoubtedly conflict with the GOP’s nonsensical beliefs.

There is one problem that comes up when Republicans to use science to argue for their beliefs. You can always find someone willing to shill for you, for sure, and for a price. Unfortunately for the GOP, that person will be John Lott, Jr., or someone like him.

If you wish to see the video, Media Matters has a clip: