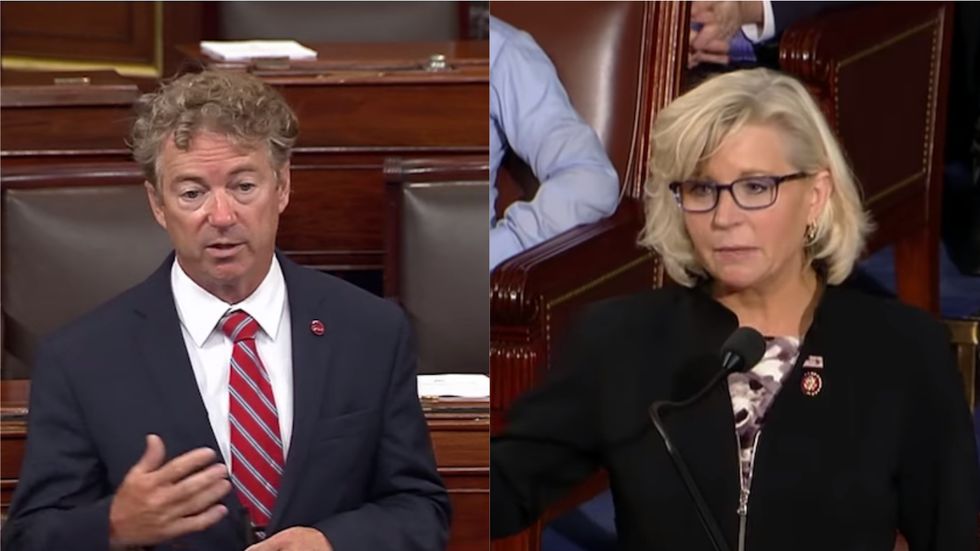 But because this is 2019, the clash didn't play out as a discussion about our moral obligations to foreigners or the strategic use of force abroad — instead, it came down to who President Donald Trump loves the most.

The spat started when Paul shared a link to a Washington Examiner opinion piece penned by two Wyoming state legislators on Twitter. The lawmakers took aim at Cheney, saying she should "stop carping at Trump for rejecting endless war." They blasted her for criticizing the president over his declination to attack Iran in June and for his consideration of a peace deal with the Taliban.

The Kentucky senator was a fan of the piece:

I agree! Why do some neocons continue to advocate for endless wars? I stand with @realdonaldtrump on ending wars.… https://t.co/rLTjDQHGkG
— Senator Rand Paul (@Senator Rand Paul)1568233748.0

Naturally, that rubbed Cheney the wrong way, and she fired back:

I stand with @realDonaldTrump and our men and women in uniform who will never surrender to terrorists, unlike… https://t.co/ITHlMXIJdD
— Liz Cheney (@Liz Cheney)1568247754.0

Things then got really personal when Doug Stafford, Paul's chief strategist, chimed in:

Actually, @realDonaldTrump loves @RandPaul and I’m pretty sure they both think your family is a bunch of chickenhaw… https://t.co/bqH1nyIutK
— Doug Stafford (@Doug Stafford)1568251258.0

Now, on one hand, this may just seem like pure pettiness. But the clash actually reveals some important features of the Republican Party and conservatism that are worth paying attention to.

First, consider that the grounds Cheney and Paul are playing on is that they both want Trump on their side. Though Cheney has criticized Trump's anti-interventionist streak, and Paul has challenged the president's use of executive power, both see it as in their interests to frame themselves as on Trump's side. Though much is made of the so-called "Never Trump" Republicans, having the president on your side is usually still the goal of most intra-party fighting.

This only works, though, because Trump actually has given both Cheney and Paul reason to think he's on each of their sides. Paul has the upper hand right now, as the departure of former National Security Adviser John Bolton is surely a blow to foreign policy hawk's view of the world. But under certain circumstances, Trump could certainly come around to issuing airstrikes again, jump into another fight against a group like ISIS, or start another round of escalating military spending, all of which would bring a smile to Cheney's face.

Trump is fundamentally malleable on many policy positions. He likes the notion of avoiding foreign conflicts and concentrating on domestic policy, but he also imagines himself as a tough world-historical figure who can shape global affairs — and that stance always has the potential to lead to war. And while Bolton clearly pushed his luck too far by quarreling with the president's conciliatory instincts, the fact that Trump hired the former national security adviser in the first place shows that aggressive foreign policy still has its allure.

So figures like Cheney and Paul are likely to continue battling for Trump's soul — while the president will be more than happy to see them vying for his affections.