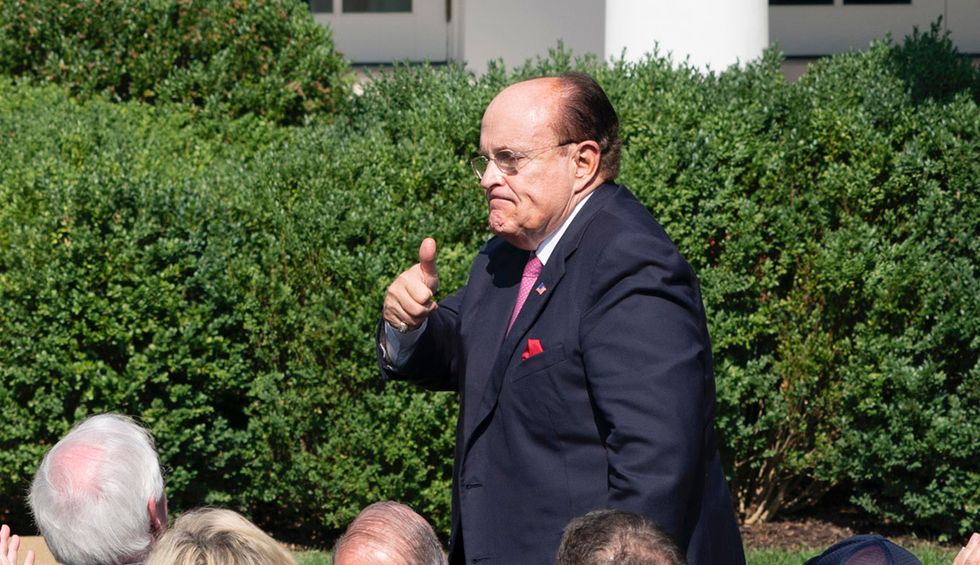 Thursday ended with the absolutely bombshell news that Donald Trump and Rudy Giuliani allegedly schemed to withhold military and financial aid to Ukraine—unless the newly elected prime minister found some kind of dirt on Joe Biden’s son Hunter, who has done work in Ukraine. You could and should read more about this scandal from my colleague, Mark Sumner, who has a great summary of the situation and a complete timeline of the scandal.

For what it’s worth, we aren’t talking small funds here. We are talking $250 million in aid that the White House blocked this summer, which was, coincidentally, released on Thursday.

Almost immediately after the news skyrocketed to the top trending topic on social media, Rudy Giuliani appeared on CNN where he lost his mind and admitted he was a co-conspirator in a Ukraine deal. More incredibly, Giuliani then ran to Twitter to not just affirm his role; he also directly implicated Donald Trump.

So, what is the reaction on Twitter from pundits, elected officials, former U.S. attorneys and more? In short—treason, corruption, bribery, extortion. Let’s get to it.

If this turns out to be what the whistleblower complaint is about & it’s accurate, Trump must leave office immediat… https://t.co/ruUqhVyezb
— Joyce Alene (@Joyce Alene)1568940444.0

“Whoever, owing allegiance to the United States, levies war against them or adheres to their enemies, giving them a… https://t.co/s8poVpHfME
— Brian Schatz (@Brian Schatz)1568940551.0

Zelensky did not explicitly connect the two in our meeting, but he was VERY concerned about the cut off of aid, and… https://t.co/3uYxCXMFt3
— Chris Murphy (@Chris Murphy)1568942612.0

I don’t know what is in the whistleblower complaint, but it was clear to me that Ukraine officials were worried abo… https://t.co/P7IHgVgz9t
— Chris Murphy (@Chris Murphy)1568943130.0

Preet Bharara, former U.S. attorney from the Southern District of New York, had the excellent vision of Barry Berke as the one to question Giuliani in a future hearing. After all, Berke did a fantastic job wiping the smug off Corey Lewandowski's mug.

If this turns out to be Trump pressuring Ukraine to investigate Biden, Congress needs to begin impeachment proceedi… https://t.co/rCG2EyVi4a
— Dan Pfeiffer (@Dan Pfeiffer)1568939424.0

if you are bribing a foreign leader you dont get to claim exec priv. Just saying.
— Jennifer Rubin (@Jennifer Rubin)1568940706.0

So the president's personal lawyer is confirming what the rest of us have been hypothesizing-- that Trump asked Zel… https://t.co/IEiwJbKsyl
— Michael McFaul (@Michael McFaul)1568952826.0

Trump sees no difference between his campaign and the national security policies of the US government. This is an e… https://t.co/mRfKCANCO5
— Ben Rhodes (@Ben Rhodes)1568945750.0

And that’s just a round-up of Thursday night’s reaction. Nothing yet from the 2020 candidates, but needless to say, this story is still developing and we’ll have more. In the meantime, which 2020 candidate do you think will be the first to call for Donald Trump’s resignation? Sound off in the comments.