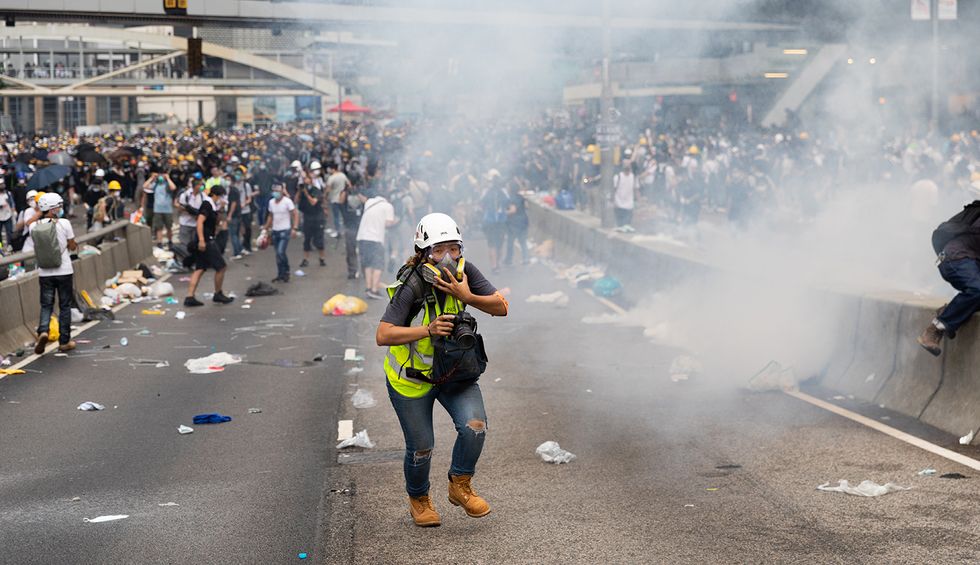 Three months on, there’s still no end in sight for the Hong Kong protest movement. What started as a demonstration against a bill to amend the city’s extradition laws has now morphed into a broader movement challenging the legitimacy of the government and seeking fundamental political reforms.

Every weekend, hundreds of thousands of protesters – sometimes more than a million – are still taking to the streets. The protests draw Hong Kongers from all walks of life: students, doctors, lawyers, journalists, teachers, civil servants, and, most recently, family members of police officers. The discussions on internet forums and encrypted messaging apps remain vibrant, with innovative ideas for new protest actions emerging frequently.

To better understand who the protesters are, as well as why and how they are protesting, I’ve conducted a series of large onsite surveys at 19 demonstrations since June 9, with the help of researchers from other universities. We have so far surveyed more than 8,000 protesters with a response rate of over 85%.

What the protesters are angry about

Our data show protesters tend to be young and highly educated. On average, half of our respondents are aged between 20 and 30. Around 77% said they had a tertiary (higher) education.

Few said they were unemployed, unlike protesters in other mass demonstrations around the world, like the Arab Spring uprisings and Spain’s Indignados movement.

Most respondents identified themselves as either democrats or localists. However, in the early stages of the protests, it is also notable that nearly 30% of respondents said that they were centrists or had no political affiliations. This dropped to around 15% by early August.

When asked why they were protesting, the vast majority of respondents (more than 90%) cited two main motivations: the complete withdrawal of the controversial extradition bill and an independent inquiry into excessive use of force by police against the protesters.

The resignation of Chief Executive Carrie Lam and other major officials was considered the least important reason for protesting. This suggests that a change in leadership is not viewed as a solution to the political crisis – unlike in 2003, when half a million people marched against changes to Hong Kong’s national security laws and demanded the resignation of then-leader C.H. Tung.

Instead, the protesters are seeking a fundamental reform of the entire political system.

For many of them, the extradition bill is just the surface of a rotting system. It merely exposes the underlying problems that have been swept under the carpet for many years: the lack of democratic representation in the policy-making and legislative process, the declining accountability of the government, the blatant domination by a small clique of business and pro-Beijing elites, the increasing unimportance of public opinion, and the steady encroachment on people’s political rights and civil liberties.

These same long-standing problems are what prompted the Umbrella Movement in 2014. But unlike the Umbrella protesters, who were intensely split over protest tactics, the current protest movement is exhibiting much stronger solidarity and resolution in achieving their demands.

The majority of respondents see themselves as “in the same boat” (that is, sharing the same fate) with one another. More 80% believe the protests should go on if the government refuses to offer anything other than the suspension of the bill. Among them, more than half support escalating the protests.

This extraordinary level of solidarity is striking. Part of this is because people have learned from the mistakes of the Umbrella Movement. Instead of pointing fingers at each another, protesters are this time using the phrase “do not split, do not sever our ties” to deal with conflicts. Misdeeds and transgressions are not condemned, but are now dealt with through collective reflection and friendly reminders.

Fuelling protesters’ solidarity is their strong feeling of desperation. Our survey results show the majority of respondents do not expect any concessions from the government. This has remained steady from early on in the protests, and explains the emergence of slogans like “I want to perish together”.

We also found a high tolerance for the more radical and militant tactics of some of the younger protesters, even among those who consider themselves moderates.

Consistently, over 80% agree that peaceful assembly should combine with confrontational actions to maximize the impact of protests. In June, slightly less than 70% agreed that radical tactics were understandable when the government refuses to listen. That percentage rose to over 90% in the August 4 protests.

Where the protests are heading

No one knows what the “endgame” of the Hong Kong protests will be. The government is now hoping that mass arrests, coupled with the new start of the school year and the possible introduction of emergency regulations, may clear out the streets in the next few weeks, ideally before China’s National Day celebrations on October 1.

The strategy may work, but likely only in the short run. If the Hong Kong government continues to refuse to heed what people are legitimately asking for, the people will undoubtedly return to the streets.

As research from other social movement studies has taught us, protests take place in cycles. The current protest movement in Hong Kong may eventually quiet down after a while, but another one may be brewing on the horizon.