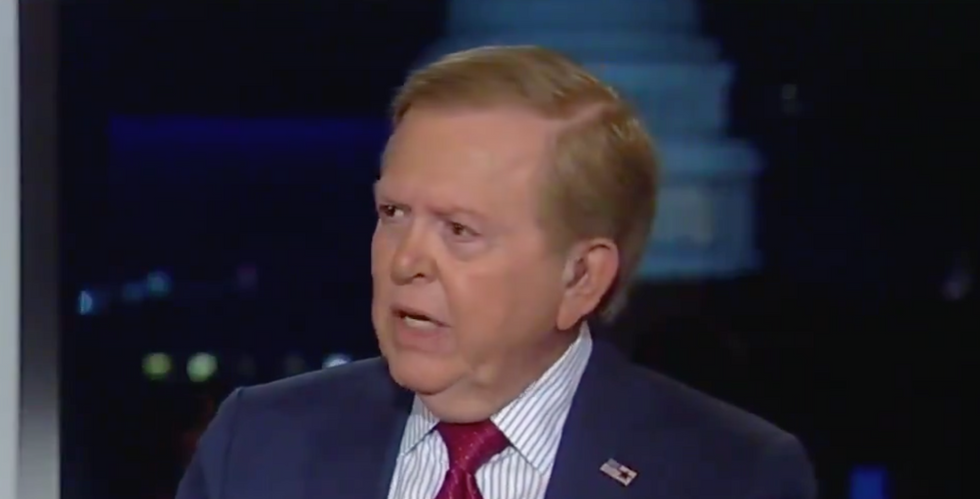 Fox Business host Lou Dobbs continues his not-very-slow transformation into a walking, breathing Nazi propaganda poster with the reintroduction of one of the most famous of anti-Semitic metaphors: the powerful Jewish figure reaching his "tentacles" over the world. His target was, as usual, wealthy pro-democracy philanthropist George Soros.

Said Dobbs, "I think most people, I will include myself, cannot conceive of why a man would fund efforts that work against sovereignty, work against our laws, there are laws against illegal immigration -- and to see [Soros'] tentacles reach out into various non-government organizations and nonprofits, that are working with everything from the Koch brothers to the Southern Poverty Law Center as you document through this book."

Dobbs was promoting another new anti-immigrant book from the anti-immigrant, pro-internment Michele Malkin, who apparently still exists and whose new book targets Soros specifically, with the usual conspiracy theories, in an attempt to scrape another month's rent money out of the conspiracy-addled far-right. Dobbs is also apparently a frequent adviser to Donald Trump, part of Trump's contingent of People From His Television Screen that he trusts far more than anyone his party or government agencies can send him.

But the powerful Jews spreading their "tentacles" over the world we hold dear? Yup. That's a famous Nazi-era propaganda trope, one still used extensively by anti-Semitic groups today.

At this point Soros should be billing the Murdoch family directly for his security costs. The years-long Fox-promoted effort to turn Soros, by name, into the supposed mastermind behind everything from worldwide "illegal immigration" to the undermining of American sovereignty has no doubt resulted in untold numbers of unstable gun-toting Fox-watching freaks putting Soros at the very top of their own target lists. If he's going to make up a significant percentage of total Fox programming, the network had better damn well be springing for the security team Soros now requires to keep the network’s armed and stupid viewers from acting on Fox's relentless conspiracy-fueled claims.

As for Lou Dobbs, what can we say? He turned his “business”-oriented show into a platform for rabid white nationalism a long while back, and Fox didn’t lift a finger to stop him. Neo-Nazi groups must have larger and more diverse investment portfolios than the rest of us assume.