CNN’s Tapper artfully exposes GOP rep's hypocrisy for attacking Biden while supporting Trump: 'Either there’s a principle — or there isn't' 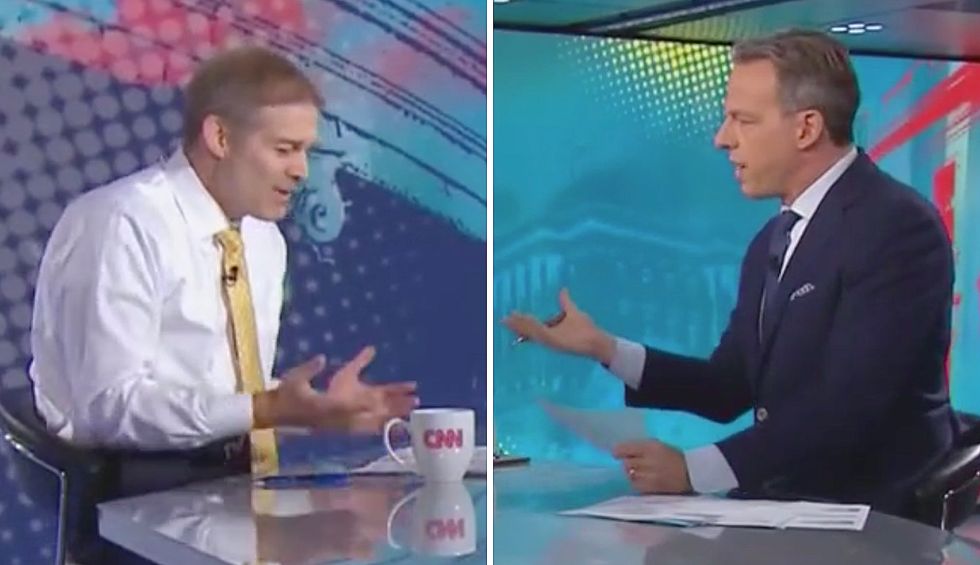 CNN’s Jake Tapper on Sunday cornered Rep. Jim Jordan (R-OH) over Donald Trump’s wild accusations about Joe Biden’s son, noting that the president’s own children are engaging in foreign business “all over the world” as their father sits in the Oval Office.

Jordan and Tapper were discussing the impeachment inquiry into Trump when Jordan launched a barrage of allegations about Biden and his son, Hunter Biden. The Republican congressman also accused Tapper of engaging in “mental gymnastics” to protect Biden.

“Sir, it’s not gymnastics, it’s facts,” Tapper replied. “And I would think somebody who’s been accused of things in the last year or two would be more sensitive about throwing out wild allegations against people.” (In July, Jordan was named in a lawsuit  on behalf of former Ohio State University athletes who claimed the former assistant wrestling coach failed to prevent sexual abuse carried out by a university doctor).

Later in the segment, Tapper turned to recent reports about Trump’s children engaging in foreign business while their father is president.

“Either there’s a principle that people should not benefit from foreign actions or there isn’t,” Tapper said.

Jordan then started on a wild rant alleging former President Barack Obama “went after [Trump] on July 31st,” and brought up the infamous dossier alleging ties between Trump and Russian President Vladimir Putin.

“It’s not okay, but he didn’t do that,” Jordan claimed.

“It’s in the transcript, we all read it,” Tapper reminded him.

“I read the transcript,” Jordan said before accusing Tapper of not reading “things in context.”

“Congressman, we appreciate your passion,” Tapper remarked. “Thank you for being here.”