Castro was right: Fact-checkers whiff on a key exchange in the third Democratic debate 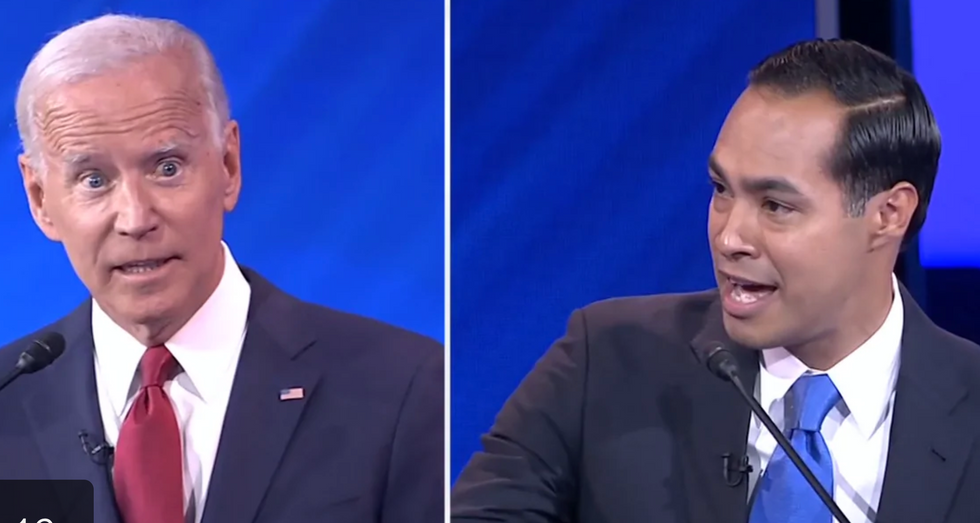 The most tweeted-about moment in the third Democratic primary debate on Thursday night came when Julián Castro accused Joe Biden of having forgotten a central point of his healthcare proposal. A day later, Castro's been panned by the pundits for being overly aggressive in his attack and called out by the fact-checkers for the substance of his dispute. But whatever one thinks of his tone, Castro was absolutely correct about one of the crucial differences between Biden's approach to healthcare and those embraced by more progressive candidates.

You wouldn't know Castro got it right reading the headlines this morning. "Castro’s Attack On Biden For Blanking On His Health Care Plan Falls Flat," read one from Politifact that was accompanied by a "mostly false" rating. "Castro appears to misrepresent Biden's health care plan during debate," was how USA Today put it. The Washington Post named Castro one of the losers of the night because "his biggest optical win didn’t have substance to back it up."

The exchange featured a lot of cross-talk and was difficult to parse, but not only was Castro was right on the substance, it's also pretty clear that any confusion that arose from the quarrel was the result of Biden having difficulty keeping up with the debate.

And in addition to getting it wrong, the fact-checkers also missed an opportunity to give their readers a greater understanding of a central divide on the left over healthcare reform.

Let's do the opposite and begin with the substance of the dispute before looking at the back-and-forth on Thursday night.

Joe Biden's healthcare plan would allow all Americans to buy into a new public insurance plan on the ACA exchanges. And he would automatically enroll all of those who would qualify for Medicaid under the ACA but who live in states that didn't expand the program. That would be about 4.9 million people, according to The Kaiser Foundation's estimate.

Both Medicare for All, endorsed by Bernie Sanders, Elizabeth Warren and some of the lower-tier candidates, and an alternative approach called Medicare for America, which Beto O'Rourke has endorsed and Castro appeared to be referencing on Thursday, would automatically enroll every uninsured person, every newborn baby and everyone who loses other coverage into their expanded Medicare programs. (While Biden would offer premium-free coverage to those living in red states making less than 138 percent of the federal poverty line, Medicare for America would cover everyone in any state making less than 200 percent of the FPL without charging them premiums and Medicare for All would cover everyone premium-free.)

So while Biden would automatically enroll 4.9 million people in non-expansion states, Medicare for All and Medicare for America would offer that same automatic coverage to around 27 million Americans.

This represents a huge philosophical difference in these approaches. As I wrote recently in The Nation...

There’s a common belief that in countries with single-payer systems, the government simply covers everyone out of general tax revenues, but that’s a misconception. As Yale political scientist Jacob Hacker told me in an interview a couple of years back, “in other countries, you’re basically guaranteed coverage and then they figure out how to pay for it. Some of that money may come from you, some will come from your employer and some of it will come from general funds. We don’t have that approach. People who don’t have coverage from their employers have to figure out how to sign up—either for Medicaid, or through the exchanges.” Medicare for America and Medicare for All would both bring that cover-first approach to our system.

Once you understand how important this difference is, it's pretty clear that Castro was correct in highlighting it, and that Biden was responsible for any confusion that ensued.

The fact-checkers all emphasized that Biden first described his proposal accurately.  "You’ll be able to get into a — anyone who can’t afford it gets automatically enrolled in the Medicare-type option we have," he said.

But the contentious exchange started later in the debate, after Warren, Sanders, Amy Klobuchar and Pete Buttigieg had weighed in. It began when Beto described his approach and Biden apparently got some important details mixed up.

O'ROURKE: In my proposal, Medicare for America, says everyone who's uninsured will be enrolled in Medicare. Everyone who's insufficiently insured, cannot afford it, can move over to Medicare. And those, like members of unions who've fought for the health care plans that work for them and their families, are able to keep them. This is the best possible path forward.

BIDEN: You just described my plan.

That's not right, but Beto didn't get a chance to follow up. At that point, moderator George Stephanopoulos turned the question to Castro. Here's the whole back-and-forth, courtesy of The Washington Post.

CASTRO: We owe a debt of gratitude to President Barack Obama. Of course, I also worked for President Obama, Vice President Biden, and I know that the problem with your plan is that it leaves 10 million people uncovered. Now, on the last debate stage in Detroit, you said that wasn’t true, when Senator Harris brought that up. There was a fact check of that, and they said that was true.

Note that Biden's campaign estimated that his proposal would lower the rate of uninsured to 3 percent, leaving roughly ten million people uncovered. Castro's statement was accurate.

CASTRO: You know, I grew up with a grandmother who had type 2 diabetes, and I watched her condition get worse and worse. But that whole time, she had Medicare. I want every single American family to have a strong Medicare plan available.

Note here that Castro offers an anecdote about his grandmother enjoying Medicare coverage the "whole time" she was ill --it will be relevant below.

Castro is talking about the entire population here. "Every single American."

CASTRO: That's a big difference, because Barack Obama's vision was not to leave 10 million people uncovered. He wanted every single person in this country covered. My plan would do that. Your plan would not.

BIDEN: Do not have to buy in if you can't afford it.

CASTRO: You said they would have to buy in.

BIDEN: Your grandmother would not have to buy in. If she qualifies for Medicaid, she would automatically be enrolled.

Biden did originally say that he'd automatically enroll those who couldn't afford health insurance but "two minutes ago," he had claimed that when Beto had called for universal auto-enrollment he had described Biden's own plan. That's what Castro was calling out, and with good reason.

It seems that when Castro referred to his grandmother being on Medicare, Biden heard a story of a low-income woman who couldn't afford coverage. "Your grandmother would not have to buy in. If she qualifies for Medicaid, she would automatically be enrolled," he said.

Conflating people of color with those living with poverty is a consistent pattern with Biden. Last month he said, “poor kids are just as bright and just as talented as white kids.” Last night, when asked "what responsibility do you think that Americans need to take to repair the legacy of slavery in our country?" Biden launched a long, rambling answer that, when parsed, appeared to be about issues commonly facing economically disadvantaged children.

The confusion was Biden's. The facts were on Castro's side. The fact-checkers screwed up. And many voters will end up less informed about this vital issue than they were going into the debate.