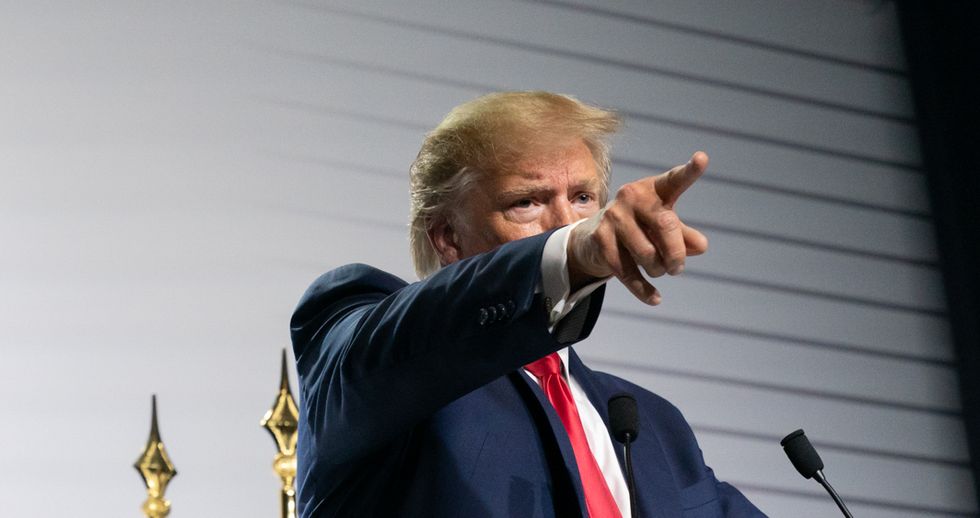 In response, Fox News host Neil Cavuto informed the president that the network is not his personal propaganda channel. He had especially harsh words for Trump supporters who demand complete fealty to the president from Fox News hosts.

“All right, well, I think the president watches Fox,” Cavuto said. “I also think he is getting sick of Fox, which is weird because I think he gets pretty fair coverage at Fox,” he added.

“But the president making clear to fact-check him is to be all but dead to him and his legion of supporters, who let me know in no uncertain terms I am either with him totally, or I am a never-Trumper fully.”

He denounced the lack of nuance in the discourse.

“There are no grays, no middle ground,” he said. “You’re either all-in or you’re just out; loyal on everything or not to be trusted on anything.”

Raw Story spoke with Dr. Bandy X. Lee, a forensic psychiatrist and violence expert at Yale School of Medicine, about the president’s feud with Fox. She was one of a handful of psychiatrists to consult with the World Health Organization on its launch of a public health approach to global violence prevention and is author of the textbook, “Violence.” At the onset of the current presidency, she held an ethics conference on the importance of mental health professionals to speak up and compiled the public-service book, “The Dangerous Case of Donald Trump.” She also convened a panel to assess the president’s mental capacity based on the Mueller report as well as a working group on an expert panel for performing independent fitness-for-duty tests. Now, she is authoring a “profile of the nation” that can serve as a primer for addressing mental disorder at societal scale (more information at: dangerouscase.org).

Raw Story: Trump seems to be in an escalating war with Fox News. First of all, can you delve in this idea that the president would even think the network works for his administration?

Bandy X. Lee: As you know, we have been predicting the president’s course for a long time, based on probability, and he has followed exactly the course we foresaw along the exact timeline we estimated. None of this is surprising to us. Totalitarian governments are nothing other than psychologically disordered individuals seizing power, and the people letting them do it. People may have laughed at Donald Trump’s comical self-aggrandizement, or calculated that they could use his mental weaknesses to advance another agenda, such as judges and tax cuts. Both are gross underestimations.

What I realize, from the way the media, politicians, and the public have been struggling, is that people simply have a hard time appreciating—not just understanding—the profound dangers that mental pathology brings. Also, they respond almost in the opposite direction of proper management. Why do we have such a hard time calling out unprecedented falsification of truths as lies? Why can we not call him a racist when he is no less than the greatest instigator of white supremacist terrorism? Why do we not dare broach the subject of impeachment when he apparently has met about a dozen offenses?

It is because pathology is of a magnitude people are unfamiliar with, and they become overwhelmed when what is needed is severe limit-setting and containment. Rather, they look away or give into the tirades and intimidation, hoping he will calm down or reduce his demands. But the opposite is true—with time, there can only be grotesque worsening of symptoms with the granting of more power. He is now “the King of Israel,” “the Chosen One,” one who can simply order companies to return to the United States, and now someone who can pardon people who break the law. It is only consistent that he expects a media network to serve his every whim.

Raw Story: In response, Neil Cavuto blasted the president, saying that the network doesn’t work for the Trump administration. What do you make of this feud?

Lee: Both Mr. Trump and his followers are of a “primitive” psychology that responds in a binary way: either you are for them or are against them. The usual cycle, then, is that there is an “idealization” period when either side believes the other is a savior who can rescue them from all problems. As no such fulfillment exists in reality, inevitable disappointment turns into “devaluation,” where nothing is redeemable in the other person. Most people grow out of this simplistic way of relating in childhood, but we have seen Mr. Trump repeat numerous cycles of this, from Jeff Sessions to Michael Cohen. Eventually, all relationships are exhausted until the person is alone.

Raw Story: Perhaps the most disturbing part is Cavuto’s that Trump supporters have contacted him to say “I am either with him totally, or I am a Never Trumper fully.”

Lee: Much of this problem has actually originated with Fox News. In fact, in the early days of Fox News when I was fresh out of training, I developed extreme concerns about the effects of calling such distortions of facts as “news” on the collective mental health of the country. Lo and behold, when Mr. Trump was first elected, I recognized it as the culmination of this thought reform.

I recently appeared on a right-wing radio talk show, as I always try to accept invitations onto “conservative” media, no matter how small, in order to reach a different audience. During the interview, I hardly had a chance to get a word in edgewise, but unexpectedly it became a valuable first-hand experiment on how a host might operate. I will not say names, but that he allows the audience to call him “the Great One” should be very telling. He employed an interrogation style that made clear he was framing me, and the setup I actually recognized from Dr. Robert Jay Lifton’s documentation of Chinese Communist brainwashing sessions. The subjects of brainwashing were the audience, not me, but he was demonstrating to the audience what to think and not think. Anyhow, there is too much for me to get into for the time we have, but I will be putting this research into a “profile of the nation” I am writing.

Raw Story: Wow, that’s incredible. What is the dynamic between the president and his followers?

Lee: It is a dynamic that did not start with this presidency—although it acutely exacerbates it—but with the brainwashing of the country over decades. People speak of technology and social media, but the first problem I can identify is the psychological effect of allowing Fox News to be called “news,” and then filling the informational milieu with thought-controlling radio shows. Have you noticed how Mr. Trump’s supporters—at least the visible ones—are very conformist, eager to look and behave alike? Their wearing the same hat, chanting the same phrases, and responding back with seemingly pre-set talking points (for me it is usually, “What about Hillary, did you evaluate her?”)—these characteristics are what one would expect from brainwashing at massive scale.

One of the reasons I am writing my profile of the nation is because we have very few tools for diagnosing and treating society when a society falls ill and conforms into unhealthy patterns.

Raw Story: It seems like we have moment after moment where one could arguably apply the 25th amendment–and then the next crazy thing happens and everyone forgets. Do you have any thoughts about the dynamic of this news cycle?

Lee: The media, frankly, is hopeless to cover the issue appropriately. We need is to bring in the emergency team—and to continue not to consult mental health experts would be absurd.