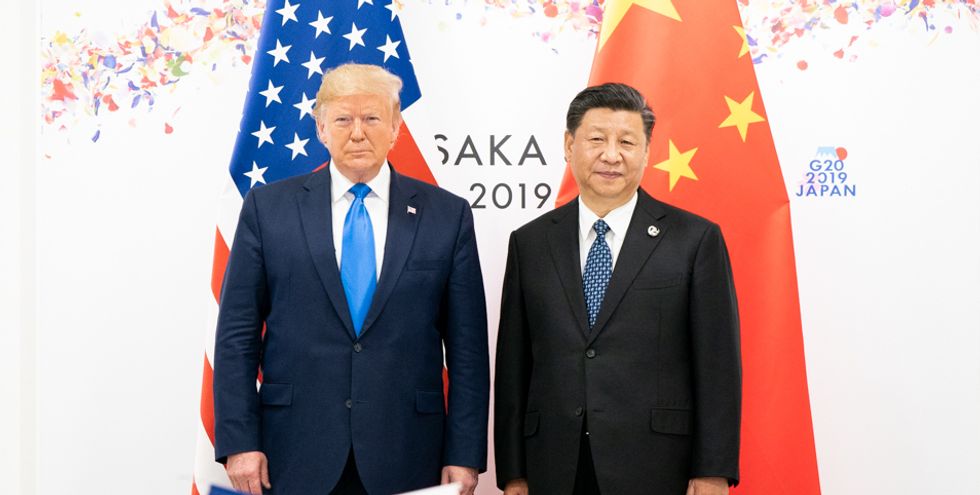 Stocks spiked Tuesday on news that President Donald Trump has backed down from a major threat in his trade war with China.

The administration had planned on slapping a 10 percent tariff — that is, an import tax — on $300 billion of Chinese goods starting on Sept. 1, 2019.

But now, the administration has backed down, as explained in a United States Trade Representative press release:

Certain products are being removed from the tariff list based on health, safety, national security and other factors and will not face additional tariffs of 10 percent.

Further, as part of USTR’s public comment and hearing process, it was determined that the tariff should be delayed to December 15 for certain articles.  Products in this group include, for example, cell phones, laptop computers, video game consoles, certain toys, computer monitors, and certain items of footwear and clothing.

Why would all this awesome stuff be exempt from the tariff until Dec. 15? The administration didn't explicitly say its press release, but many observers pointed out the obvious: The new date would significantly limit the effect of the tariffs on the costs of consumer goods during the Christmas shopping season.

Trump confirmed that reading in comments to the press.

“What we’ve done is we’ve delayed it so they won’t be relevant in the Christmas shopping season,” Trump said Tuesday. “Just in case they might have an impact on people.”

Some tariffs will still go into effect on Sept. 1, mostly on agricultural goods.

But the reason for delaying the consumer product tariffs, of course, undercuts frequent lie about his tariffs, that China pays for them and not the U.S. Trump has often suggested that tariffs are not just a good negotiating tactic, but good in themselves — that they boost the U.S. economy. It also undercuts Trump's headstrong strategy that he can announce an aggressive round of tariffs and then start to roll them back within less than two weeks. He's floundering without a clear objective.

As Trump ramped up his trade war at the beginning of the month, the stock market tanked. The president — who is obsessed with cable news, which often features a stock ticker in the bottom corner — has shown that he is sensitive to the market's perturbations in the past. It's possible these moves spooked him, prompting him to pull back on some tariffs and triggering the rally on Tuesday as the Dow Jones Industrial Average rose more than 370 points by the end of the day.

Economist Paul Krugman noted that the market's reactions to the posturing in the trade war seem to exaggerate the severity of the effects of the tariffs themselves.

"The best going explanation of the tariffs/market link was that markets took tariff announcements as indications of broader decision process; to be blunt, how crazy Trump is. Hard-line announcements suggested more radicalism to come, softer announcements more rationality," Krugman explained on Twitter. "But this was obviously a defensive move to avoid price hikes before Christmas, not a change in Trump's world view or improvement in his decision-making. So why respond so strongly?"

The best guess, it seems to me, is that the move indicated that Trump is well-aware of the potential impacts his policies will have on consumers. And that, in turn, will have an effect on his decision-making. Any president would want to avoid being the cause of consumer's pocketbook anxiety as they head into the Christmas season without a very good reason for the policy.

And Trump doesn't have a very good reason for his aggressive tariffs. As Vox's Matt Yglesias notes, Trump's claims about what he actually wants from China vary and don't really form a coherent demand. Mostly, it just seems that Trump wants to be seen as tough on China without having a thought-out strategy.

In recent months and weeks, especially with Fed Chair Jerome Powell raising rates in response to, in part, the negative effects of Trump's trade war, fears have grown that the president may actually be leading the country to choppy economic waters with his international feuds. It did not appear to many that the fight would end peaceably and with only minor changes to the status quo, as Trump's kerfuffle over NAFTA did.

But by showing he's sensitive to the impacts of tariffs on the holiday season, Trump is sending the pretty clear message that he's not likely to let his pugnacious instincts completely override pragmatic political strategy. That gives investors reasons to breathe a sigh of relief.

It has another effect, though, too, and one Trump probably won't be happy about. It tells China that the president is cognizant of where the pain points in the U.S. economy are. And that means, despite his bloviating, he has less leverage over the authoritarian regime than he would like people to believe.

This story has been updated to include comments from Trump.