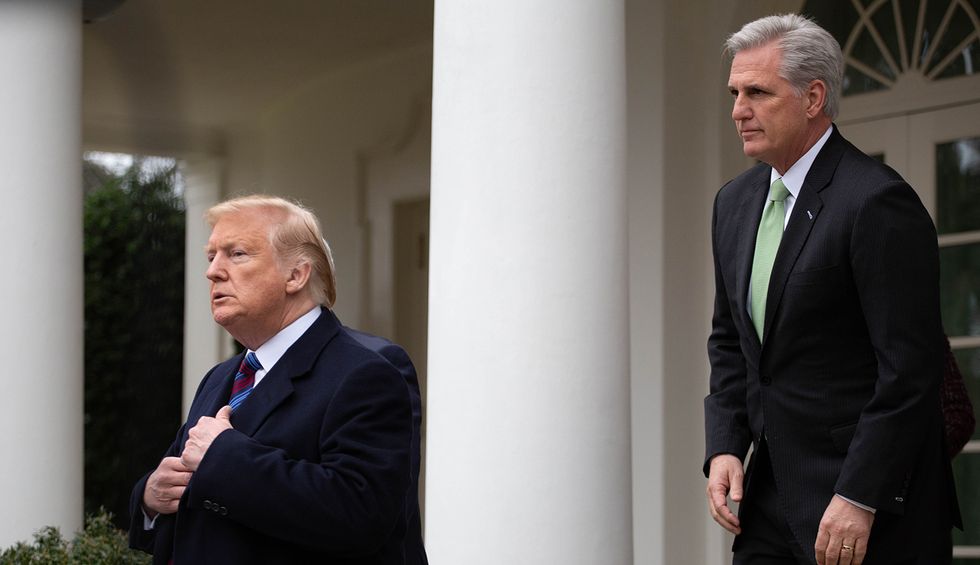 President Donald Trump appears to have misstated the value of his Scottish golf resorts by $165 million, an act which could potentially constitute a federal crime.

The controversy came to light after seemingly conflicting financial disclosure forms regarding the president's Aberdeen and Turnberry resorts in Scotland were submitted in the U.S. and the U.K., according to a new report by HuffPost.

In the president's 2018 U.S. filing for those resorts, he claimed that each resort was worth more than $50 million. In his balance sheets to the British government filed for the same period, Trump claimed that the resorts' aggregate debt was greater than their assets by 47.9 million pounds, or the equivalent to $64.8 million as of Dec. 31, 2017.

Similarly, while his forms with the U.S. Office of Government Ethics claimed that the two resorts earned him $23.8 million in income, his filings for the U.K. Companies House office in Edinburgh showed them losing 4.6 million pounds, or the equivalent of $6.3 million.

As HuffPost also noted, "His U.S. disclosure statement also fails to mention $199.5 million in loans Trump has made to those resorts: $54.9 million from him personally to Trump International, Scotland in Aberdeenshire; $144.6 million from his trust to Trump Turnberry in Ayrshire."

Knowingly lying about or omitting information on his financial disclosure forms could constitute a potential violation of the U.S. Ethics in Government Act on Trump's part. Such a violation is punishable by as much as a year in jail. Moreover, "signing the form attesting to the untrue information constitutes making a false statement, punishable by up to five years in prison," according to HuffPost.

Citizens for Responsibility and Ethics in Washington (CREW), a nonpartisan organization which focuses on preventing public corruption, expressed concern over the apparent discrepancy to Salon.

"The discrepancies between President Trump’s public financial disclosure and his UK filings certainly raise questions about whether or not the value of his business assets are being inflated," Aaron Rodriguez, the press secretary for CREW, told Salon by email. "Of course, none of this would be an issue if the president had followed basic ethics norms and divested from his international business interests."

In addition to the inherent dangers of having a president break the law with impunity, there is also the risk to the American economy, a subject that Salon discussed with Sen. Martin Heinrich, D-N.M., in 2017.

"Congress must be vigilant against the potential for President Trump to enrich himself and his family at the expense of the average American," Heinrich told Salon regarding his report "The Costs of Corruption to the American Economy."

He added, "The president and his family’s conflicts of interests are inexcusable and unacceptable and could depress economic output by over $1,000 per person just in one year. Not only are these practices dangerous but harmful to the economic security of American families across the country."

He also pointed out that "the purpose of this report is to highlight the real economic impacts of President Trump’s conflicts of interest and the harm some of his business interests and financial conflicts could cause. The stakes are high, and the risks are real. It’s not just about how the president, his family and his administration benefit from these conflicts of interest — but how they could hinder economic growth in the long term."

In addition to calling for greater transparency, Heinrich said that "I also have been calling on congressional investigators to follow the money and believe we need to take a look at the president's tax returns. We cannot let President Trump recklessly harm our economy over his conflicts of interest. It’s a threat to our democracy and a threat to the economic security of American families."