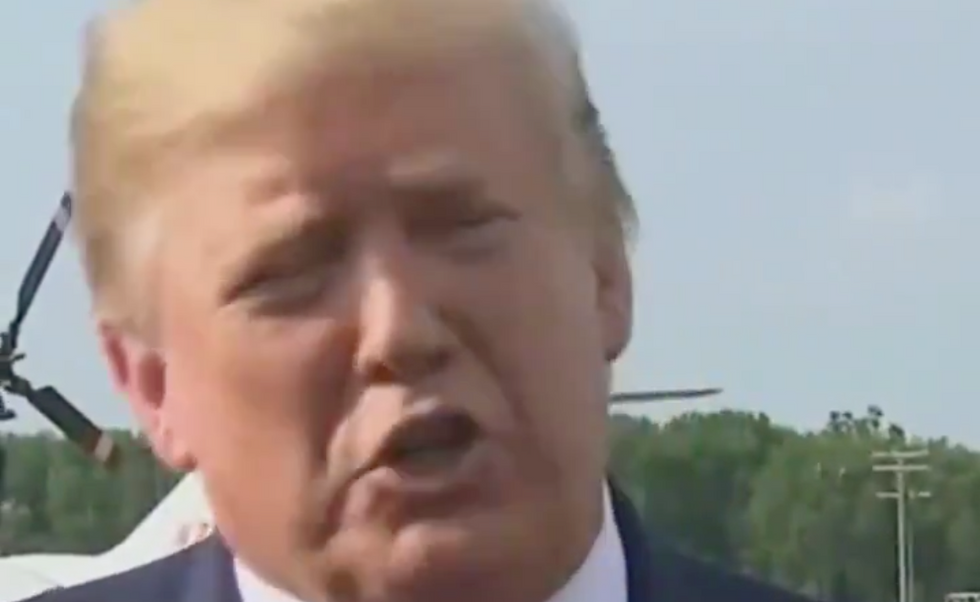 President Donald Trump repeated his claim on Thursday that people with mental illnesses are the cause of the country's epidemic of gun violence, underscoring his refusal to take meaningful action on gun control, his desire to demonize and detain vulnerable people, and his attacks on Americans' healthcare.

In New Jersey, before leaving for a rally in New Hampshire, Trump told reporters that Americans must "remember the words 'mental illness'" when grappling with the crisis.

"These people are mentally ill," the president said. "And nobody talks about that."

Trump claimed that the closure of mental health institutions several decades ago led to the current crisis in which hundreds have been killed since the early 1980s.

"If you look at the 60s and 70s, so many of these institutions were closed, and the people were just allowed to go onto the streets," Trump said. "That was a terrible thing for our country."

At Splinter, Caitlin Cruz condemned the president's "terrifying" suggestion that more prisons "under a different name" are the answer to gun violence.

"If your goal is to make everyone afraid of anyone with a depression diagnosis, then Trump reached it," wrote Cruz. "Painting institutions where we lock up all the people whose brains don't work like you want them to, as the solution to gun violence would be laughable in its absurdity, if it wasn't such a terrifying concept."

Despite Trump's claim that "nobody talks about" the supposed link between mental health and shootings, he's been joined by a number of Republicans in recent years who have immediately pointed to people suffering from mental illnesses in the wake of mass shootings.

According to the Centers for Disease Control and Prevention (CDC), however, just five percent of the people who died as the result of gun violence between 2001 and 2010 were killed by someone with mental health issues.

"Blaming mental illness for the gun violence in our country is simplistic and inaccurate and goes against the scientific evidence currently available," said Dr. Arthur Evans, CEO of the organization. "As we psychological scientists have said repeatedly, the overwhelming majority of people with mental illness are not violent. And there is no single personality profile that can reliably predict who will resort to gun violence. Based on the research, we know only that a history of violence is the single best predictor of who will commit future violence. And access to more guns, and deadlier guns, means more lives lost."

In addition to saying little about how stricter gun control could prevent shootings after the attacks, Trump also did not address the racist and xenophobic rhetoric that the El Paso shooter included in a manifesto he posted online before the shooting, much of which mirrored the president's own comments about race and immigration.

Critics also noted after the shootings in Texas and Ohio that despite Trump's focus on mental health, he has done little to ensure that people with psychological health issues get the support they need.

Medicaid is "the most critical part of any conversation about mental healthcare," Jennifer Snow of the National Alliance for Mental Illness told Newsweek this month.

As NBC News reported, the president has also made it easier for people with mental illnesses to buy firearms by rolling back Obama-era regulations in 2017.

Trump's suggestion that "we can't let these people be on the streets" further concerned mental health professionals and advocates about his plans to combat gun violence by ostracizing people with mental illnesses—who are actually more likely to be the victims of a shooting than the perpetrators.

"You can't force people into treatment; you can't necessarily treat them successfully; and you certainly can’t lock them up forever," Prudence Gourguechon, a former president of the American Psychoanalytic Association, told the Huffington Post last year.

This will do nothing to stop gun violence but will harm people with disabilities, run up the deficit, and make peop… https://t.co/wpgYcTMosA
— Andy Imparato (@Andy Imparato) 1565956597.0

"Trump wants to send disabled people, specifically people with mental health disabilities, back to institutions so that he and the NRA can continue to profit off of dead Americans," tweeted the Women's March Disability Caucus. "This is not an option. We are not their scapegoats."