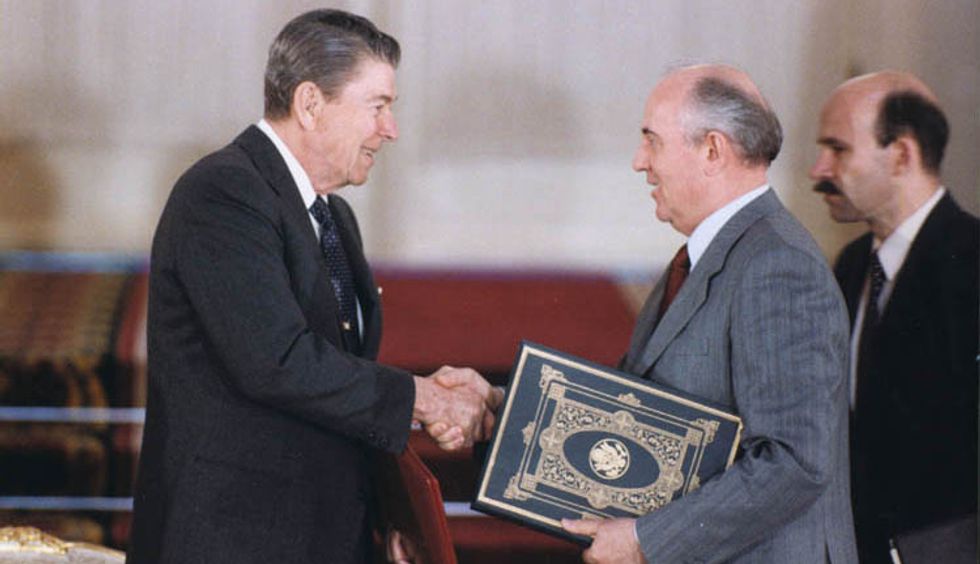 As Donald Trump stated he would do back in January, he has withdrawn the United States from the 1987 Intermediate-Range Nuclear Forces (INF) Treaty. This action follows another failure of Trump’s vaunted negotiation skills in which his team was unable to secure an agreement to bring a  pair of borderline new Russian weapons under the auspices of the agreement, or to reach agreement on these weapons with China. Instead, the treaty will go by the wayside, as the U.S., Russia, and China all push for new systems that increase the likelihood of nuclear weapons being used on future battlefields.

As The New York Times reports, the U.S. is planning to begin testing of a new class of medium-range nuclear weapons in the next two months. Whether it will produce and deploy the new weapon remains unclear, but Russia and China are already making significant moves into this area. Several of the missiles recently launched by North Korea also have the kind of range that would have put them under the control of the INF Treaty.

The purpose of the INF Treaty was to restrict the use of nuclear weapons as a kind of last-ditch option on the battlefield—a go-to for taking out an entire army at a punch. Particular concerns centered around Russia’s ability to target Europe and the Middle East, and U.S. efforts to counter by deploying weapons in areas such as Turkey. But with the collapse of the treaty, those weapons can be expected to proliferate, and the possibility of their use in a conflict is rising.

Two of the authors of the original treaty describe the situation in dire terms. “The United States and Russia are now in a state of strategic instability,” said former Energy Secretary Ernest Moniz and former Sen. Sam Nunn. “Not since the 1962 Cuban missile crisis has the risk of a U.S.-Russian confrontation involving the use of nuclear weapons been as high as it is today. Yet unlike during the Cold War, both sides seem willfully blind to the peril.”

With the INF Treaty gone, the only major treaty remaining to restrict the numbers of nuclear weapons is the New START Treaty, which regulates the longer-range ballistic weapons that threaten U.S. cities and facilities.

After decades during which no nuclear weapon has been used and during which both U.S. and Russian leaders have worked to reduce their nuclear arsenals and restrict the potential use of such weapons, the gateway to nuclear conflict is sliding wide open again. There aren’t any duck-and-cover drills in schools. There is rarely any discussion of the issue on the news. But the threat of a nuclear exchange never went away. Under Trump, that threat is growing.

China has built up an enormous arsenal of weapons aimed at strategic targets such as Taiwan, Japan, and India. And while Trump has said that he wants to create a new INF treaty that would include both Russia and China, China has demonstrated no interest in the idea.

And considering Trump’s “success” in dealing with China on economic issues, maybe it’s better that he not talk to them about nuclear weapons.