The Trump-Fox feud continues with fierce pushback from Neil Cavuto 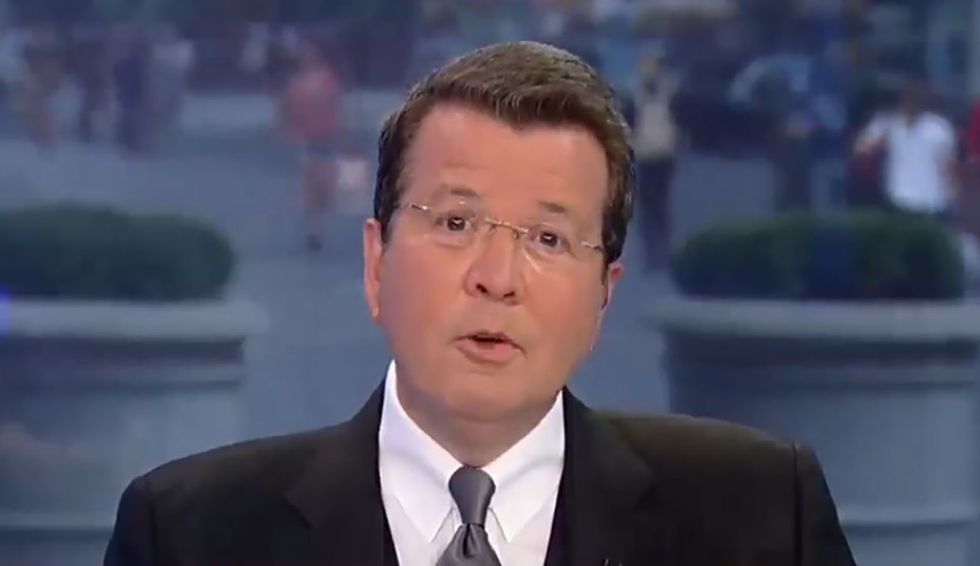 On his Thursday show, Neil Cavuto responded to Donald Trump’s recent remarks about the relative dearth of bootlicking happening at Fox News these days.

Cavuto wasn’t happy about this because Fox helped create this monster, and now the monster is rising from the sea and fixin’ to stomp on all the wrong buildings.

(Of course, if Trump abandons Fox for One America News Network or Alex Jones, one has to wonder how long his new paramour could possibly last. He already has a campaign press secretary who claims he never, ever lies, but for some reason the press refuses to play along. At this point, the only way to keep him happy would be to stick his dumb ass in a fake Matrix world where he’s supreme viceroy of the multiverse and the galaxy’s women are all irresistibly attracted to cow bladders stuffed with mouse diarrhea and haggis — or “human” facsimiles thereof.)

“I think the president watches Fox. I also think he is getting sick of Fox, which is weird because I think he gets pretty fair coverage at Fox. But the president making clear, to fact-check him is to be all but dead to him. And his legion of supporters who have let me know in no uncertain terms, I am either with him totally or I am a never-Trumper fully. There are no grays, no middle ground. You’re either all in or you’re just out. Loyal on everything or not to be trusted on anything.

“Which could explain the president himself this week bashing Fox News yet again, urging his supporters to stop watching the channel, to quote ..., ‘Fox isn’t working for us anymore.’ Well, first of all, Mr. President, we don’t work for you. I don’t work for you. My job is to cover you, not fawn over you or rip you. Just report on you. To call balls and strikes on you. My job, Mr. President — our job here — is to keep the scores, not settle scores. Now, in my case, to report the economic numbers when they’re good and when they’re bad. When the markets are soaring, and when they’re tumbling. When trade talks look like they’re coming together, and when they look like they’re falling apart.

“Now, I’m sorry you don’t like these facts being brought up, but they are not fake because I did. What would be fake is if I never did. If I ignored all the times you said you loved your old secretary of state, Rex Tillerson, until you didn’t. Had no plans to dump your Homeland Security secretary until you did. Called Chinese President Xi Jinping an enemy just last week and a great leader this week. Sometimes you don’t even wait that long. Last week you expressed an appetite for background checks before arguing just hours later our background checks are already strong.

“These aren’t fake items — they’re real items and you really said them. Just like you never paid to silence a porn star, and, well, it turns out you did. Never ordered your former White House counsel Don McGahn to fire Bob Mueller until we learned you tried. Fake is when it’s wrong, Mr. President, not when it’s unpleasant. Just like it isn’t and wasn’t fake when you said the Access Hollywood tape wasn’t real when it was, or that you inherited a Depression from Barack Obama when you didn't, or that you ripped quantitative easing when he was president, but are furious the Federal Reserve isn’t doing the same for you now that you are president.

“You’re entitled to your point of view, Mr. President, but you’re not entitled to your own set of facts. Now, we can argue over whether you ever wanted to buy Greenland or disrupt hurricanes with nuclear weapons. But where seeds are planted, doubts are sown. You’re right to say the media isn’t fair to you, that they’re more inclined to report the bad than anything good about you. So it is no surprise you’re frustrated that more aren’t in line with you or that everyone at Fox might not be in lockstep with you. You might even think that those who are work for you. They don’t. I don’t. Hard as it is to fathom, Mr. President, just because you’re the leader of the free world doesn’t entitle you to a free pass. Unfortunately, just a free press. Goodnight.”

And was it just me, or did Cavuto look like he was about to cry in that video?