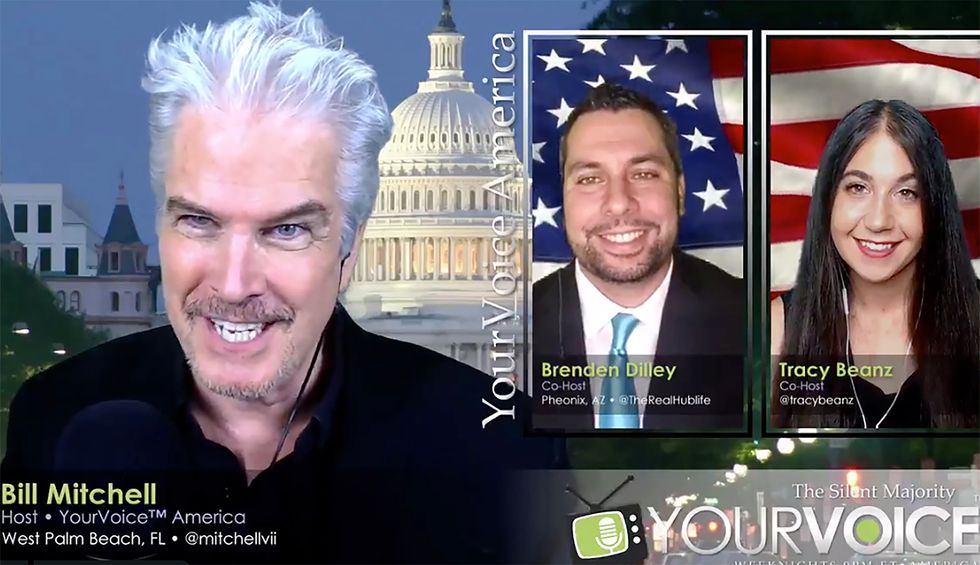 Earlier this year, QAnon conspiracy theorist Bill Mitchell (who hosts the far-right online talk show “Your Voice America” and is a strident supporter of President Donald Trump) launched a crowdfunding campaign for a new studio — which he said would be in Washington, D.C. Moving from Palm Beach, Florida to D.C., Mitchell stressed to listeners, would put him in much closer contact with all the pro-Trump politicians who live in the nation’s capital. But after raising money for a new studio, the Daily Beast’s Will Sommer is reporting, Mitchell didn’t move to D.C. but rather, bought a condo in Miami instead.

On April 3, Mitchell launched a GoFundMe page. And on May 7, Mitchell tweeted, “One great thing about living in DC will be that all my political friends from around the country all eventually go there; so I get to see everyone!” But in order to make the move, Mitchell stressed, he would need to raise money for the equipment.

“All that stuff is very expensive, and if you want it, there’s a couple of ways you can do it,” Mitchell told listeners — and one of them was the GoFundMe page.

Mitchell raised $14,280. But instead of moving to Washington, D.C. as promised, the “Your Voice America” host ended up deciding to remain in Florida and move to Miami. Mitchell tweeted a photo of his “new Miami home” on August 10, and one disappointed Twitter user responded, “New Miami home. Didn’t you say you was raising money to move your voice America to D.C.?”

Mindy Robinson, a right-wing actress and fellow Trump supporter, expressed her disappointment as well — telling Mitchell, “Seriously, I hate that I have to call out another conservative pundit, but you’ve gone off the rails on both the cause and your morals.” And far-right media personality John Cardillo accused Mitchell of perpetrating a “scam” and posted, “Those who donated funded a Miami vacation and Bill’s living expenses.”

@mitchellvii You said nothing about the gofundme being for DC? Then what the hell is this? Seriously, I hate that I… https://t.co/lKKcV5Y6Bh
— Mindy Robinson 🇺🇸 (@Mindy Robinson 🇺🇸)1565638695.0

But Mitchell has defended his decision to choose Miami over Washington, D.C., insisting that Miami offers “much better distribution” and “far more reach” for his show — that, and warmer weather.

“DC gets maybe 4 nice months a year,” Mitchell posted on Twitter. “Miami gets 10.”