‘That's not a lie!’: Fox Business host fumes when cornered with a blatant example of Trump's dishonesty 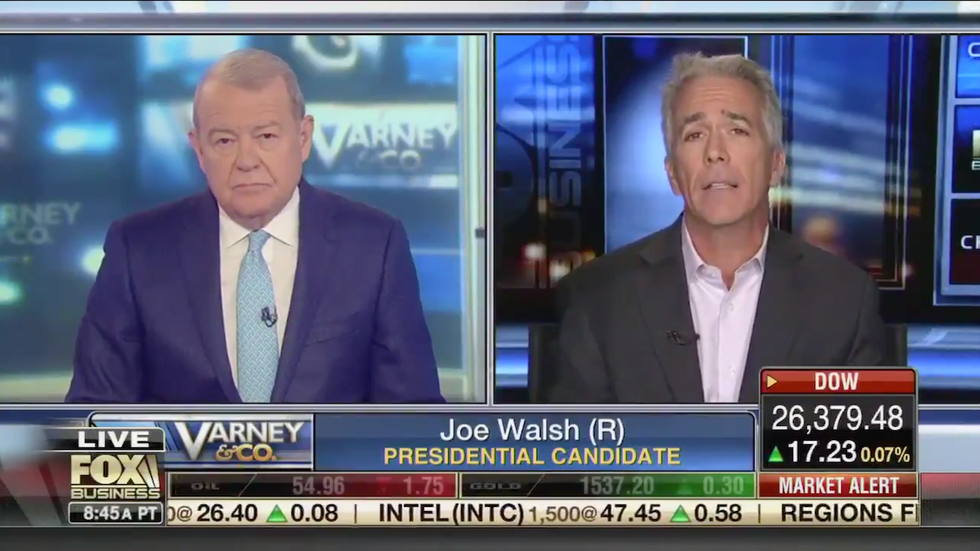 President Donald Trump, on Wednesday, complained that Fox News has been “letting millions of great people down” by giving his 2020 campaign too much negative coverage —which is laughable in light of the fact that the right-wing cable news outlet has been, on the whole, quite favorable to his presidency. And one of Trump’s ardent defenders at Fox Business is Stuart Varney, who was in denial when former Rep. Joe Walsh appeared on his show and asserted that Trump lies on a regular basis.

The far-right Walsh, who is challenging Trump for the 2020 GOP presidential nomination, described Trump as “a president who we fundamentally can’t believe” and added, “I do believe he lies virtually every time he opens his mouth.”

When Varney asked Walsh to cite an example, the former congressman turned radio host responded that Trump “lied this week when he said there were high-level phone calls between the United States and China.”

Varney disagreed with that example, and Walsh got more specific — saying, “Stuart, he said there were high-level phone calls with Chinese officials. His staff admitted that was not true, that he lied in order to manipulate the market.”

Walsh asked Varney, “Do you believe this president lies? You don’t believe he has ever lied?” — to which Varney responded, “He exaggerates and spins.”

Walsh pressed on, asking Varney, “You don’t believe he has ever told the American people a lie?” And Varney responded, “No.”