How hospitals prep their staff for mass shootings 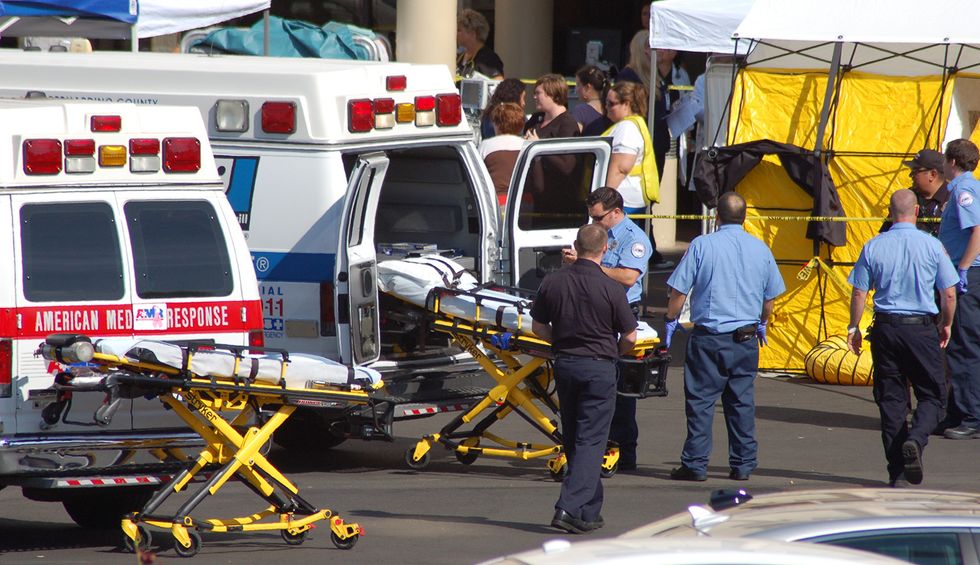 As mass shootings have become normalized, many Americans have learned to fear public spaces like concert venues, movie theaters, shopping malls, places of worship, and even schools.

Meanwhile, recent rampages in California, Texas and Ohio have rattled the nation and provoked renewed calls for tougher gun laws. They have also prompted a growing list of countries and organizations to issue travel advisories for the United States, warning of high levels of gun violence that Amnesty International deemed a "human rights crisis."

Nearly half of Americans believe it is likely there will be another major mass shooting in the next three months, even though such attacks comprise a small fraction (between 1% annually) of gun-related deaths.

"They have nothing to fear," President Donald Trump said Friday when asked if he had any advice for students who fear gun violence as they return to class for the 2019-2020 school year.

Nevertheless, mass shootings linger in the public consciousness, largely because of their scope and their random nature. That has prompted a nationwide re-evaluation in the way doctors, nurses, first responders, hospitals and law enforcement officials prepare for and respond to such events.

One hospital where meticulous disaster planning was put into practice is the University Medical Center of Southern Nevada (UMC), the only level-one trauma center in the state, where 104 patients arrived on Oct. 1, 2017 after a lone gunman opened fire at an outdoor country music festival, killing 58 people and injuring more than 800 others.

But even two decades as a trauma surgeon couldn't steel Dr. John Fildes for the terror he encountered that night — in both the sheer number of patients and the extent of their injuries.

Fildes began his shift at UMC just minutes after gunfire stopped at the Route 91 Harvest Festival, the scene of the deadliest mass shooting in modern U.S. history. Within minutes, tens of concert-goers clinging for their life had streamed into the hospital. Soon after that, bodies punctured by high-velocity gunshots arrived in droves — via ambulances, private cars, taxis, trucks, buses, Lyfts and Ubers. Some victims even arrived on foot.

In an interview with Salon, Fildes explained that while the hospital had conducted drills in the past to prepare for mass casualty incidents like nightclub shootings, chemical spills and plane crashes, it hadn't activated them "to the same extent" before that October night.

"We didn't expect that volume of patients," he continued, "but because our plan was flexible it allowed us to expand into other areas of our hospital and continue accepting wounded patients."

Fildes added that he had "no way of anticipating what the following day or two were going to look like," and said the hospital had prepared for an attack like the one carried out in Paris on November 13, 2015, when coordinated terrorist cells killed 130 people and wounded over 400 in bombings and shootings that hit six locations in and around the city and occured only minutes apart.

"I was convinced based on the ferocity of this attack that there would be other cells opening up in the city over the night," Fildes said. "I don't know if the city could have absorbed one to two hundred patients, three or four times."

Emergency physicians, surgeons, medicine residents and fellows operated throughout the night, the next day and beyond. Fildes and the surgery department he chairs saved every one of the 104 patients who arrived at the hospital with survivable injuries.

Still, he pointed out the tragedies that unfold in hospitals affect not just patients and their families, but also the nurses and doctors who care for them. The medical center began mandatory counseling for staffers the next day.

"They couldn't help but be affected by it," he said, his voice cracking with emotion. "They dedicate their lives to a science of healing and service, and this was such a sad and unnecessary event."

"You do the most for the most and you protect yourself while showing compassion and resilience to your patients and your colleagues," he continued. "If you want a quote, that's my quote right there."

Not all hospitals are equally prepared, however, according to the results of a poll conducted last year by the American College of Emergency Physicians (ACEP). Roughly 93% of physicians said they don't believe their emergency departments are "fully prepared" to take in a large influx of patients in the event of a natural disaster, human-made catastrophe, or other mass casualty incident.

In the wake of last week's shootings in El Paso, Dayton and Gilroy, the American Medical Association (AMA), the American College of Emergency Physicians (ACEP) and other physician and health organizations have again stressed that gun violence is a public health care crisis.

"The frequency and scale of these mass shootings demands action," AMA president Patrice Harris said in a statement.

As many health care providers continue to wait for lawmakers to take meaningful action to curb gun violence, hospitals across the country have developed emergency plans and conducted drills to ensure they have the protocols in place to respond to the unthinkable.

Earlier this year in Ohio, medical students and residents participated in an active shooter drill that included a police officer acting as a live gunman firing blank rounds from a handgun in a classroom setting. The drill required some students to become the simulated victims or caregivers at the same time.

Dr. Nicholas Kman, an emergency medicine physician and professor at Ohio State University's Wexner Medical Center, told Salon that while the exercise was "very stress-producing," it provided students an opportunity to practice responding to injuries as they happened.

"If you do these drills enough, when the real thing happens it actually feels a bit like a drill," he said, noting that the real thing could "happen anywhere." Having students serve as victims also provided students with a better view of the "victim's side of the response — how we show compassion, how we treat each victim like a person, how quick we are with taking care of the bleeding," Kman said.

Ching said he developed the program because "emergency departments are now being challenged to prepare for acts of large-scale violence, like school shootings," which said was once a "rarely encountered situation in pediatrics."

The two-day training program requires participants to respond to more than 20 critically wounded trauma "patients" amid a packed hospital filled with children on stretchers with gunshot wounds, screaming infants, and parents scrambling to find their kids.

"It's just mass chaos in the room, [but] it's a means for people to practice something that hopefully never happens," he said. "How do you really prepare for something like this unless you've actually had the chance to experience it? You want to be prepared as best as you can."

Rebecca Hotz, security director at Robert Wood Johnson University Hospital (RWJUH) in New Jersey, said that while active shooter drills can be frightening, "the fact that we don't shy away from them and that we are open about education and preparedness" has instilled confidence in the hospital's staff that they are ready to respond to such an attack.

"Being an active part of an emergency preparedness plan just makes you aware of the new reality that we live in," Dr. Rajan Gupta, director of trauma at RWJUHm told Salon. "This is a new reality. It's occurring all too frequently and it makes all of us realize how important it is we are well prepared."

Roughly 1,500 miles northwest in North Dakota, Jamestown Regional Medical Center (JRMC) has also educated its staff on how to respond to an active shooter should a real event occur.

Trisha Jungels, chief nursing officer at JRMC, told Salon the hospital conducted its first active shooter drill in April 2018. Though the facility is located in a rural area with a population a little over 15,000, Jungels told Salon the hospital's administrators were "passionate about not ignoring reality and believing that it couldn't happen in our organization and in our small community."

"When we first announced that we were going to be completing an active shooter drill, the staff was very anxious about it. They believed that practicing the drill puts our current patients and population at harm and that it would be very scary," she explained, noting that some staffers expressed concern that the drill could create trigger patients who might have experienced or witnessed a shooting.

Jungels explained the staff prepared for the drill for at least six months prior, noting that "extensive planning" is required before putting one in place.

"When that those events happen where you have large populations of people that need medical care, you literally pull resources from every nook and corner of your facility — and that's everybody from home health nurses that are out on the field to your teams that work in your operating rooms," she explained. "You just redirect staff and community resources to care for those people — and that care can happen in hallways, in operating rooms, in surgery center rooms."