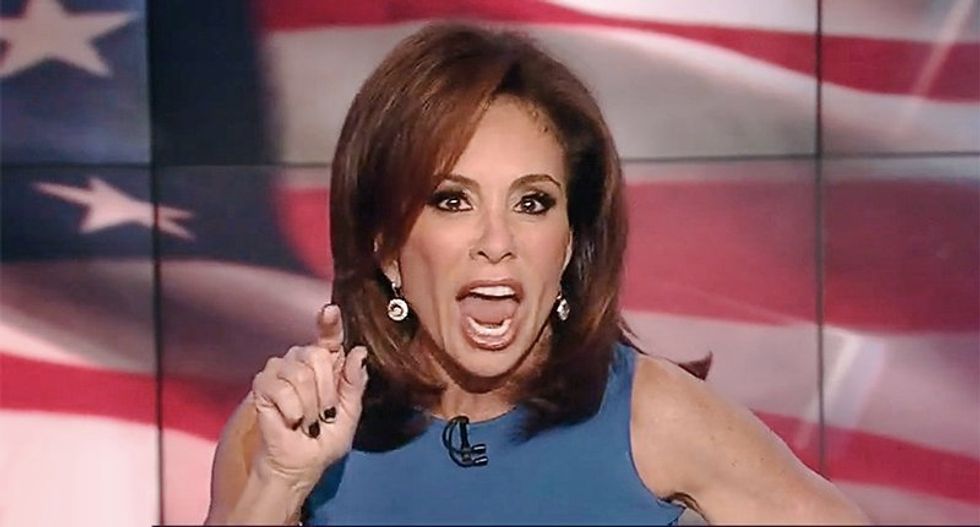 "I've often wondered, who do they hate more?" Starnes asked Pirro. "Do they hate Donald Trump? Or do they hate the people who put him into office?"

" Well, they hate Donald Trump. He's the one they want to get rid of, because people like you and me who put him into office — their plan and their plot to remake America is to bring in the illegals, change the way the voting occurs in this country, give them licenses," Pirro said, offering no evidence to support her claims. "They get to vote, maybe once, maybe twice, maybe three times, and you know, you've got motor-voter registration on the day of the election. You've got people with — We've got voter rolls that haven't been purged of dead people in years where the Democrats have resisted that."

"Think about it," she said, finishing her point. "It is a plot to remake America — to replace American citizens with illegals who will vote for the Democrats."

Pirro's words mirrored the rhetoric of the accused El Paso shooter, who wrote in a racist screed that “this attack is a response to the Hispanic invasion of Texas." The shooter directly echoed President Trump's repeated warnings of "an invasion" at the border ahead of the 2018 midterm elections. According to this theory, which has become a core tenet of white supremacist ideology of white supremacy, nonwhite immigrants are somehow "replacing" white people.

"The [El Paso] suspect wrote that his views 'predate Trump,' as if anticipating the political debate that would follow the blood bath," Peter Baker and Michael D. Shear wrote in the New York Times after the massacre. "But if Mr. Trump did not originally inspire the gunman, he has brought into the mainstream polarizing ideas and people once consigned to the fringes of American society."

Pirro is not the first Fox News host to push the racist conspiracy theory on viewers of the right-leaning news network. As Salon's Igor Derysh has reported, primetime stars Tucker Carlson and Laura Ingraham, who has been dubbed a "neo-Nazi fan favorite" by Rep. Alexandria Ocasio-Cortez, D-N.Y., have both trafficked in similar rhetoric:

Democrats “want to replace you, the American voters, with newly amnestied citizens and an ever increasing number of chain migrants,” Ingraham said on her Fox show in October.

Ingraham also claimed that Texas was “completely overrun by this illegal invasion” and “calling it anything but an invasion at this point is just not being honest with people.”

Carlson has similarly claimed that immigration will “change this country completely and forever” and that Democrats want “demographic replacement,” with a “flood of illegals” to create “a flood of voters for them.”

Such language is intended to “dehumanize” immigrants in order to justify the cruel policies undertaken to combat immigration, like putting children in cages and warehousing migrants in inhuman conditions, Jonathan Ryan, the executive director of the Texas-based Refugee and Immigrant Center for Education and Legal Services, told Politico.

“A government cannot commit open, widespread and notorious violations of human rights under both international and domestic law without substantially dehumanizing the people that they’re inflicting the pain upon to desensitize the nation to the injustices or make the injustices appear OK,” he told the news outlet. “The only way to participate in such cruelty is to dehumanize them.”

In the immediate aftermath of the El Paso massacre, Carlson took his racist beliefs one step further, claiming that white supremacy was a "hoax" promoted by the mainstream media, "just like the Russia hoax."

"I've lived here 50 years, and I've never met anybody — not one person — who ascribes to white supremacy," Carlson said as apparent proof of his false claim. "I don't know a single person who thinks that’s a good idea."

“Tucker is RIGHT!" Duke wrote on Twitter. "White Supremacy is a ZioMedia Conspiracy Theory! The term itself is a lie."

Starnes, for his part, is known for pushing anti-immigrant rhetoric on his show. The National Association of Hispanic Journalists (NAHJ) recently severed ties with Fox News, returning the nearly $17,000 it received from the conservative-leaning cable channel to sponsor its upcoming conference, in response to his "irresponsible" language.

"Starnes’ brazen language is symptomatic of a culture that provides a megaphone for disinformation by those in power with agendas, including the Trump administration at the cost of the most vulnerable — immigrant communities," NAHJ President Hugo Balta wrote in a letter to his organization.. "While alarming, the situation with Starnes is not an isolated incident and follows years of ongoing NAHJ conversations with Fox News and recent meetings with management."

Salon has reached out to Fox News for comment.

You can listen to Pirro's appearance on Starnes' radio show here: