Why people who should really know better obsess over useless polls 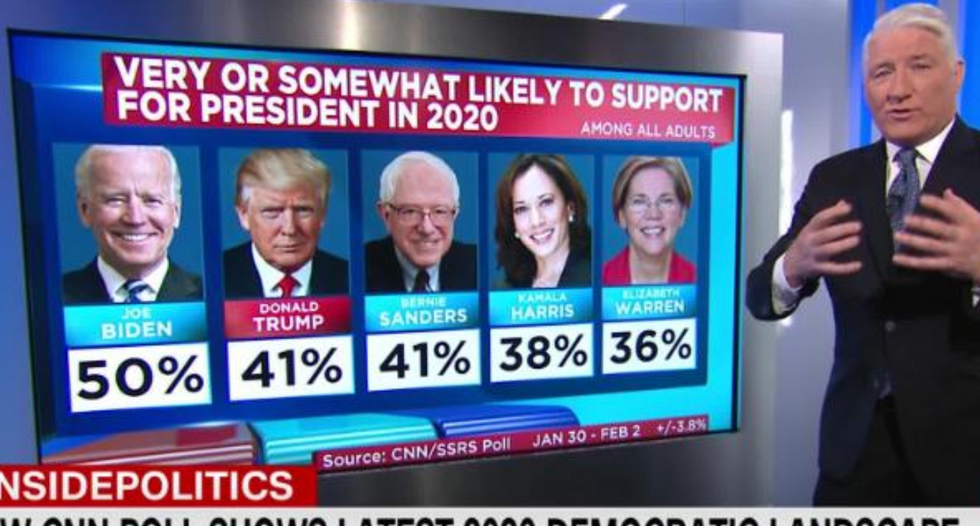 If you go back to 1999 or 2003, you’ll find that only a handful of polls asking voters about the following years’ elections were released before October or November. There was little point. It was widely understood that while the “invisible primaries” were underway among party insiders and activists, most people wouldn’t begin to pay attention to the race until a couple of months before the first primary votes were cast.

There were many more early polls conducted in 2007, and by 2011 there was a steady flow of public opinion surveys. Now here we are in 2019, and we’re flooded with them. It’s pretty clear that this exponential growth in polling more than a year out from the general election corresponded with and has been fueled by the widespread adoption of social media.

While most non-political junkies won’t really start paying attention to the 2020 race for a while, for those of us living in the bubble of political Twitter the Democratic primary—if not the general election--has been underway since shortly after the 2018 midterms. After all, everyone we interact with in our little online communities and everyone we read in our self-selected media outlets are to varying degrees obsessed with the 2020 race. It’s easy to assume that most of the voting public is as well. So we demand constant updates on the state of a race that isn’t yet in full swing.

This is a reality of our media environment—and a product of our drawn-out election seasons. People like me—and probably you, given that you’re reading this—create an artificial demand for information about who’s ahead and who’s behind, and then political journos, who live in the same bubble, step up to meet it. They have to file stories about something on a regular basis. If you write about policy or offer media criticism, it’s not hard to find topics, but if you’re covering a horse race when the horses are still in their trailers on the way to the track, you need fodder. You can get it by wearing out some shoe leather at campaign stops in Iowa, but if you're a pundit you might just write up the findings of the latest poll. So a growing number of pollsters--good, bad and in between—work to meet their demand, as well as ours.

The irony is that those of us who know best how little public opinion polls really tell us 16 months before an election are the most likely to write about them, dig into their internals and parse them on social media. (I’m guilty of this myself.)

If you were to ask those journos and pundits who spent the first half of this year talking about how the two frontrunners for the Democratic nomination were old white guys despite the party becoming increasingly diverse, they would happily acknowledge that Joe Biden and Bernie Sanders were leading the early polls mostly because they had very high levels of high name recognition—as would the pollsters who conducted the surveys they cited--but that doesn’t keep anyone from filing their columns or hitting send on those tweets. (It would be hard to find a better example of this than a roundup of the latest 2020 election polling at FiveThirtyEight titled, “Should We Take These Early General Election Polls Seriously? $#!% No!”—a headline that would work just as well with primary polls.)

Similarly, think about all those reports you read about how Bernie Sanders or Kamala Harris is doing among groups like African-American voters or millennials according to one poll or another. Those findings only carry weight in surveys of black people or younger voters specifically, or at least those that oversample those groups to get a decent number of respondents. But a typical survey, like The WSJ/NBC poll, only asked 76 black Democratic primary voters who they were supporting. NBC’s writeup tells us that Joe Biden, with 46 percent, has a huge lead over Kamala Harris’s 17 percent among African Americans, but the margin of error with 76 respondents is plus or minus 11 percent. So, in theory, Biden could be up over Harris by either 57-9 or 35-28.

It would be wrong to say the polling this far out is entirely meaningless because the shifts in the early race are at least worth noting. They influence the perceptions of activists, journalists and donors. But it really is difficult to overstate how little they tell us about what’s likely to happen when voters start casting primary ballots in five months, much less in the general election in 16 months.

Historically, early-state primary polls have only started to have predictive value after Thanksgiving of the year before the election. All signs point to voters being more tuned into this race than usual, for obvious reasons, but a poll conducted in June, just before the first debate of the cycle, found that only a third of registered Democrats were really paying attention to their party’s primary. Other polls have found that higher shares of Dems are tuned into the race--and it’s clear that the level of interest is quite high for this point in the cycle--but a more relevant number for the predictive value of polling is the Wall Street Journal/ NBC News poll’s finding that only one in eight Democrats had chosen a candidate as of the second week of July. With seven of eight voters yet undecided, the numbers we’re seeing reflect how most people are leaning, and not whom they’re definitely supporting.

National primary polls are even less valuable as the results of early states influence how people vote later in the process.

As for those head-to-head general election polls that come out every week or so? That FiveThirtyEight piece includes an analysis of polling numbers from a year prior to every election between 1948 and 2012, and the average error is 11 percentage points. That means that when you see a result like Trump losing to Biden 42-51 in a head-to-head matchup, as The WSJ/NBC poll found, what that’s really saying is that if the election were held today, Trump would get anywhere between 31 and 53 percent and Biden would win the support of between 40 and 62 percent of voters. And you really don’t need a poll to tell you that.