Why are people protesting in Puerto Rico? Here are 5 facts about the growing call for Governor Rosselló to resign 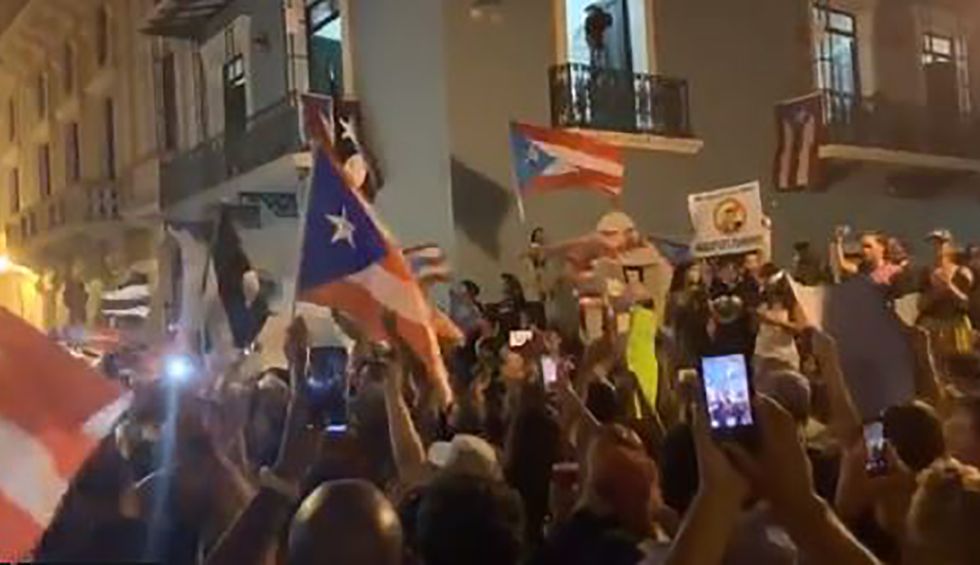 What’s up in Puerto Rico right now? If you’ve been following along on social media, you’ve likely seen countless photos and videos from Old San Juan, where half a million people have gathered to call for the Governor of Puerto Rico, Ricardo Rosselló, to resign. Why? It’s a little complicated, but absolutely historic for more than one reason. We can break it down below.

Just a few days before close to a thousand private texts were released (discussed more below), the FBI arrested two former senior officials (Julia Keleher and Ángela Ávila-Marrero) in Rosselló’s administration. Why? For allegedly using federal money to fund favored businesses. Basically, they’re accused of taking this money from vulnerable people in Puerto Rico and giving it to businesses that contractors with political connections. This money totals at an estimated $15.5 million and the 23 related charges include fraud and money laundering.

Next up, local sources published excerpts from absolutely disgusting chat messages between Rosselló and other members of the administration, including associates and lobbyists. The chats, which were sent via Telegram, an encrypted messaging app, were filled with homophobic and sexist remarks, including about Carmen Yulín Cruz, the mayor of San Juan. Cruz, you probably know from her standing up to Trump post-Maria (and his recent descriptions of her as “incompetent” and “despicable,” among other things)… And also because she plans to run against Rosselló in 2020.

The Center for Investigative Journalism published nearly 900 pages of these chats in mid-July, and from there, people were (understandably) outraged.

3. How long have people been protesting?

As of today (Sunday), about two weeks. The protests have been non-stop and, according to reports from people on the ground, have resulted in some bars and restaurants closing early or entirely. On Thursday, the Miami Herald reported that police in San Juan used rubber bullets and tear gas to disperse protesters outside of the Governor’s mansion (La Fortaleza).

Keep in mind, that while small protests have happened in Puerto Rico, the size and length of this protest is absolutely historic for the island. While much coverage has been about protests in Old San Juan, they’ve also occurred in other parts of the island, including Ponce.

4. What do protesters want?

In short: For Rosselló to resign.

5. Is there a chance the Governor will be impeached?

Indeed! While protesters are calling for him to resign, the Department of Justice and Office of Government Ethics for Puerto have launched investigations to determine whether the leaked texts suggest actual law violations. If so, it may be enough to begin the impeachment process.

What are people saying on social media? Plenty. Let’s dig in.

Ricky Martin (who was mocked for his sexuality in the leaked messages) tweeted:

I stand with the people of Puerto Rico in their fight against corruption and join them in calling for the immediate… https://t.co/S5pgmErrtx
— Bernie Sanders (@Bernie Sanders)1563675913.0

Here are some shots of the crowd outside the Governor’s mansion, in Old San Juan:

The crowd seems to be growing in front of the Puerto Rico Governors mansions. Every day. Every night. This has been… https://t.co/YiNDpdkHsA
— David Begnaud (@David Begnaud)1563651373.0

Further back of protesters in the streets:

And in the heat:

Mass #yoga Sunday morning outside of governor’s mansion in Old #SanJuan as people prepare themselves for the strugg… https://t.co/fPiDTIg4NC
— Michael Deibert (@Michael Deibert)1563709564.0

Seriously, tons and tons of people:

A lot of bad things are happening in Puerto Rico. The Governor is under siege, the Mayor of San Juan is a despicabl… https://t.co/DtdQFiNoZx
— Donald J. Trump (@Donald J. Trump)1563461655.0

I stand with the people of Puerto Rico as they protest the corruption and disgraceful behavior of their government.… https://t.co/r7cLOu8J88
— Hillary Clinton (@Hillary Clinton)1563641265.0

As did Kamala Harris:

The only path to justice for the people of Puerto Rico is to speak truth against divisive and corrupt leaders. I st… https://t.co/en5kJu0gX6
— Kamala Harris (@Kamala Harris)1563646600.0

I've been standing with the people of Puerto Rico in their protests against corruption and their governor’s behavio… https://t.co/GfQXejMSMQ
— Elizabeth Warren (@Elizabeth Warren)1563578688.0