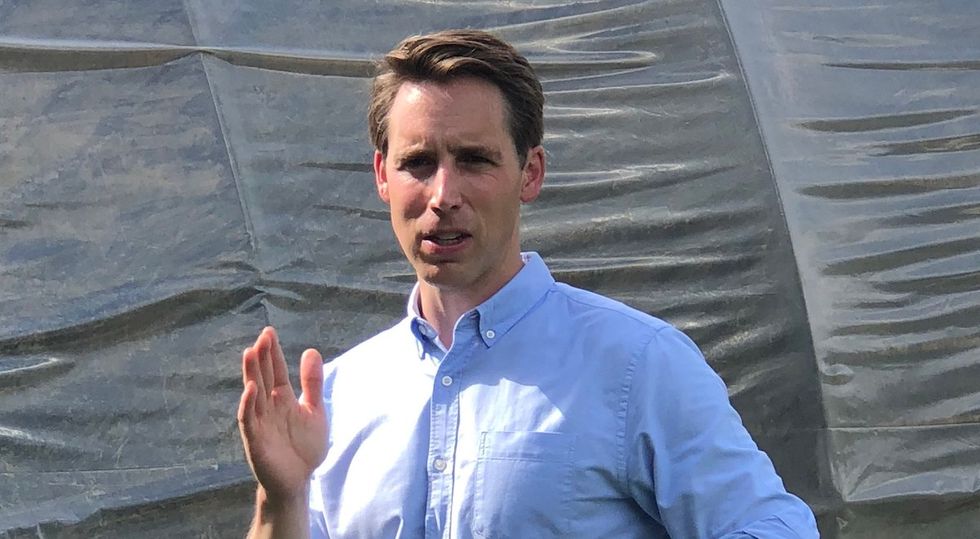 Recently, Republicans have demonstrated a huge amount of concern over the idea that there might be someone in Congress who holds anti-Semitic views. Someone suggesting that Jewish Americans have divided loyalties. And it turns out this concern is very well-founded … as demonstrated ably by Missouri Republican Josh Hawley.

Hawley might be somewhat familiar from his appearances during some recent hearings. Or his claims that Google returns liberal results. Or his statements during the Barr hearing that showed Hawley believes some genuinely bizarre conspiracy theories. But it was Hawley’s keynote address at the National Conservatism Conference that nailed down who he is, what he believes, and where his party is going in a way that should be absolutely terrifying for every American.

Here’s part of that address:

For years the politics of both Left and Right have been informed by a political consensus that reflects the interests not of the American middle, but of a powerful upper class and their cosmopolitan priorities.

This class lives in the United States, but they identify as ‘citizens of the world.’ They run businesses or oversee universities here, but their primary loyalty is to the global community.

And they subscribe to a set of values held by similar elites in other places: things like the importance of global integration and the danger of national loyalties; the priority of social change over tradition, career over community, and achievement and merit and progress.

Call it the cosmopolitan consensus.

Even if you don’t speak white nationalist dog whistle, this speech is pretty shocking. Hawley is claiming that the United States is run, and has been run, by a secret group of international “elites” who value terrible things—such as education, achievement, and progress. People who think women should be able to have a career rather than be forced to stay at home.

But it’s far, far worse if you understand what he’s really saying, and understand the purpose of this convention.

The National Conservatism Conference is new. The meeting held this week in Washington was its inaugural event. It’s described as a movement for a “new vision of conservatism” that focuses on social issues and family values. Which sounds a lot like the old vision of conservatism, except that this one featured Hawley, John Bolton, and Tucker Carlson as the initial speakers, and the discussion mostly involved the horrors of diversity and the unseen hand of globalist elites.

Behind this convention is the Edmund Burke Foundation. Oddly enough, considering what Hawley said in the speech, this foundation definitely has international ambitions, the sort not seen since, say, 1945. Because the purpose of the Edmund Burke Foundation is precisely to marry conservative talking points with nationalism, and to spread that idea around the world, or at least to “Western and democratic” countries, as the group’s very small website makes clear.

At this conference, speakers didn’t come out just against “illegal immigration,” but against immigration in general. Or at least, immigration from the wrong kind of countries. And they spoke out against immigrants. One of them was a University of Pennsylvania law professor who called immigrants “too loud” and blamed them for “an increase in litter.”

That professor, Amy Wax, didn’t bother with any code words. She didn’t feel constrained by any moral qualms. She simply stated that “our country will be better off with more whites and fewer nonwhites.”

That’s at a conference keynoted by the newest Republican senator, and attended by members of Trump’s cabinet and pundits from Fox News. And somehow no one, no one seems to be screaming about it. It’s not in the headlines. It’s not causing pundits to drag out their fainting couches.

Now, if you didn’t get it the first time, go back and read Hawley’s speech again, the speech that was chosen to kick off the National Conservatism movement. And understand that every time Hawley says “cosmopolitan,” what he really means is “international Jews.” The use of that term has a long history in anti-Semitism. It’s exactly the term that was used, and the way that it was used, in the Soviet Union to justify the harassment, imprisonment, and murder of Russian Jews: “rootless cosmopolitans” who, according to Stalin, weren’t loyal to their own country, but to “all things foreign.”

It’s not clear how National Conservatism is meant to be abbreviated. Are its members Natcons, or Natcos, or just NatCs? Either way, there’s no doubt about how to pronounce it.