It’s not just Trump’s racism: It’s the radical Republicans who stand with him 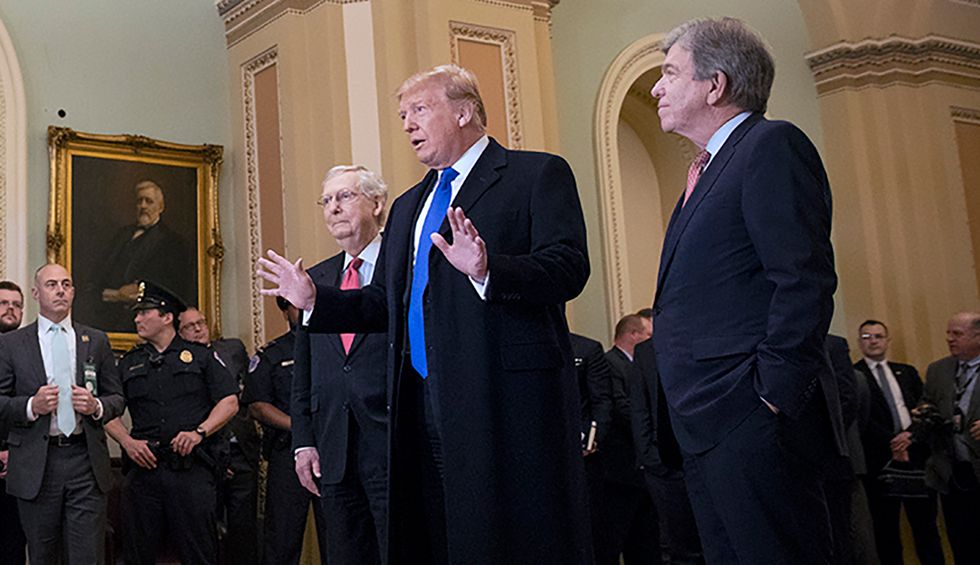 The only thing more disgusting than having to suffer Donald Trump’s outwardly racist remarks—complete with double-downs and repetitions—is watching Washington refuse to own them.

Trump continued on with his attacks on four vocal, left-leaning, first-year congresswomen, expressing feigned surprise that people have found the words racist. Does he really think we are that dumb or societally deaf?

The four struck back, of course, with just enough partisan talk to allow various congressional Republicans to try to redefine the matter as one of adverse politics rather than race—conveniently overlooking the fact that the four are women of color. The Republicans who make it to television seem to take an unusually smarmy delight in casting the four—and all Democrats, while they are at it, as socialists bent on destroying the nation.

And in Congress, Republicans chose to attack Speaker Nancy Pelosi for using the word “racist” on the floor toward a condemnation resolution rather than deal with the content.

Then the House did pass a remarkable resolution—to condemn the president for his tweets and remarks. I hope voters hold every Republican who voted to support racist statements to account.

It’s as if there never has been disagreement over public policy in this country. Trump seems to have forgotten that he has sounded like someone who “hates” this country for years. Meanwhile, revisiting “Love it or leave it” is a refrain from my young years opposing the war in Vietnam. Didn’t work then, won’t work now—just saying.

His words were racist, and most of his policies lean heavily against immigrants, against those at the lower end of the economic scale, at urban centers, at public education, against fair voting practices.

Trump has been a racist since day one of campaigning against Mexican rapists and criminal immigrants, against Muslims, against Jews when convenient and in support of those American Jews who support one-party domination in Israel. He was a racist during Charlottesville. His words were quoted by those who shot up crowds at a Florida mall and at a Pittsburgh synagogue. His words are driving renewed physical threats against these four women.

His words were racist and most of his policies lean heavily against immigrants, against those at the lower end of the economic scale, at urban centers, at public education, against fair voting practices. Protests about lowered black and brown unemployment numbers aside, it is easy to track policy alone that works against the needs and aspirations of minorities in this country.

There is no question about the adverse racial impact that Trump is having on the culture. Hate crimes are up substantially, his government appointments specifically do not reflect the country, he attacks “shithole” countries. There is a distinct pattern that some would trace back to the days of running apartment complexes with his family that the government cited for racially discriminatory practices.

What ‘Go Back’ Means

Rep. John Lewis (D-Ga.) reminds us that “Go back where you came from” was an oft-heard derisive call during the Civil Rights movement. There should be no mistake here about meaning.

That all this should happen as federal officers are conducting raids on immigrant families, as we continue to overstuff migrants in cages at the border, as the Justice Department declined to prosecute the police officer who was videoed choking Eric Garner five years ago. The remarks come in the same week as the president summarily ordered an end to asylum as we know it and is literally sending people back where they came from.

It leaves me with questions:

It is also sad that Trump may have meant to do all this to achieve some perceived advantage in his re-election campaign (when does he actually do presidential work rather than campaigning?) by putting the four—the so-called Squad—as representing the main political front for the Democratic Party (unfortunately, they do not), and making their ridicule a central thrust of his campaigning.

The worst part of the mess left behind is that many people just turn away from public affairs, as if it is too upsetting, too distant or that none of it matters.

We need to denounce racism wherever Trump sticks its head up.