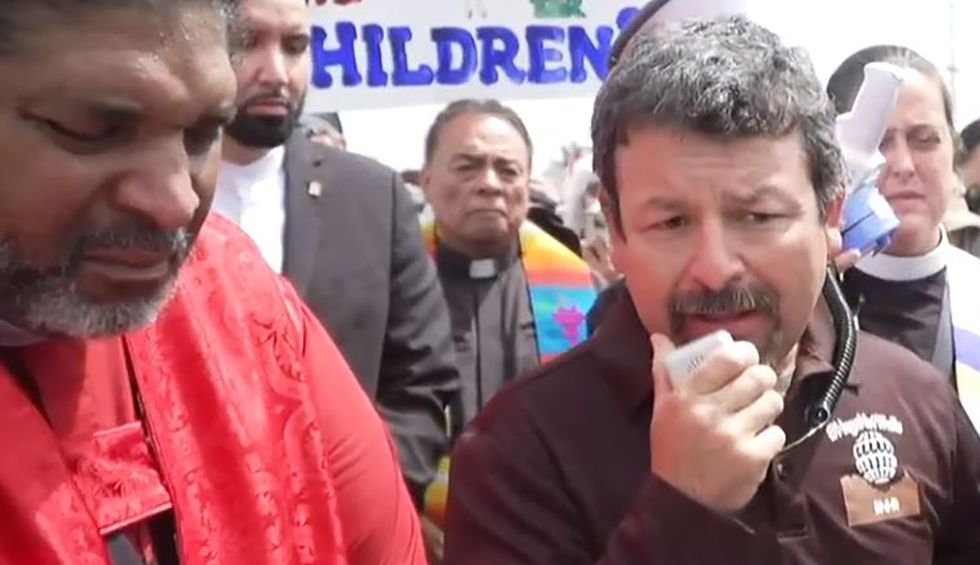 "We have Jewish, Christian, Muslim, Red Letter Christians, Unitarian, and people not of faith but who believe in a moral universe coming together at the border today, not for our own agendas but for the immigrant children and families who are facing injustice," Barber, national co-co-chair of the Poor People's Campaign, said ahead of the march.

"We are here in unity with local leaders who invited us," said Barber. "We have seen just a glimpse of the horrible conditions our immigrant neighbors are facing at the border."

When the group of "Moral Monday" demonstrators arrived at the entrance of the El Paso facility, Barber, Rabbi Rick Jacobs, and Imam Omar Suleiman demanded to be allowed inside to meet with hunger-striking detainees.

"We are requesting a pastoral visit, to visit our members of the human family who are on hunger strike," Barber said. "We are asking to be let in to see them. We are their pastors. We are clergy leaders, they are our members."

According to the Associated Press, three Indian nationals seeking asylum in the United States were forcibly hydrated in an El Paso, Texas detention facility as they entered their third week of hunger-striking.

"ICE confirmed that there were detainee hunger strikes at its facilities in El Paso and Otero, New Mexico, late last week," AP reported, "but it would not comment on the claims of forced hydration or force-feeding."

The faith leaders were ultimately not permitted to enter the facility, which Barber said closed its gates as marchers approached.

"Whatever the pain is, the lack of healthcare, the lack of living wages, people being locked in cages...all those streams are coming together and forming a mighty rushing river of justice," the demonstrators said in a group prayer led by Barber. "We condemn the modern-day slavery, we cast down the injustice."

"We condemn and call evil and unjust the caging of people, the making people drink from toilets, the refusal to even give them a toothbrush," the group continued. "You're holding angels in this place. But you will not hold them forever. We join them now, and not only do we bring condemnation, but we bring hope. It doesn't have to be this way. America, turn around. America, repent. America, stop. America, change your ways."