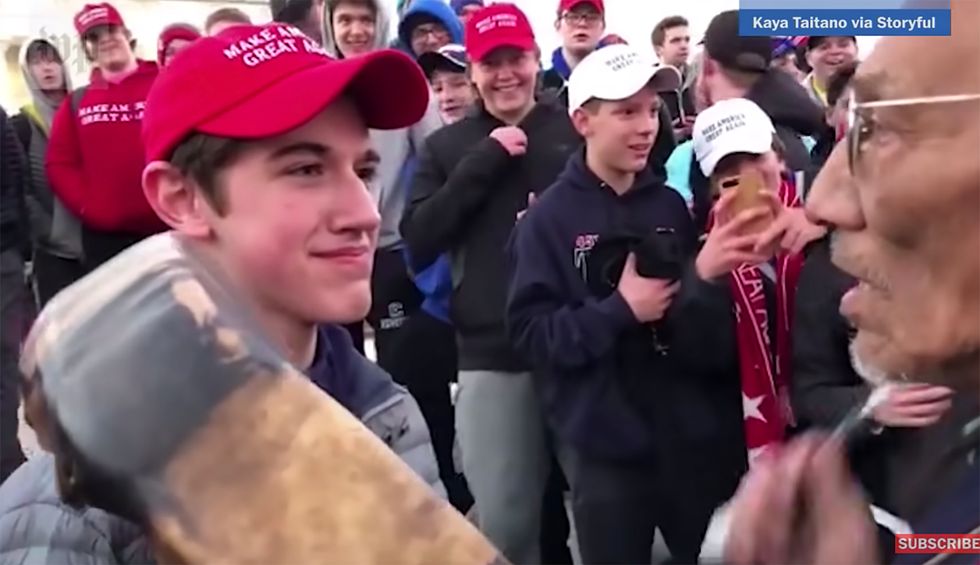 Remember the viral video of Nick Sandmann, a student at Covington Catholic High School wearing a MAGA hat, staring down Nathan Phillips, an Omaha Nation elder who was attending the Indigenous Peoples March, while Sandmann’s peers seemingly cheered and jeered? After coverage of the interaction, which occurred on January 18 of this year, picked up in the media, Sandmann sued the Washington Post for $250 million in a defamation suit. As of Friday, a federal judge dismissed it.

His lawsuit alleged that the Post had “wrongfully targeted and bullied Nicholas because he was a white, Catholic student wearing a red ‘Make America Great Again’ souvenir cap” and that the paper defamed him by suggesting that he“assaulted and/or physically intimidated” the older man or “engaged in racist conduct.” In an interview with NBC, by the way, Sandmann has affirmed that he “can’t say I’m sorry” for his behavior. He also gave a statement saying he hoped to defuse the situation.

U.S. District Court Judge William Bertelsen ruled that his suit claims were “not supported by the plain language in the article, which states none of these things.”

"He [Phillips] concluded that he was being blocked and not allowed to retreat," Bertelsman wrote in his ruling. "He passed these conclusions on to The Post. They may have been erroneous, but, as discussed above, they are opinion protected by the First Amendment." Basically: Phillips felt threatened and the media is allowed to report that he expressed as much. The judge didn’t find that the Post exposed Sandmann to public hatred, contempt, or ridicule.

He also noted that Sandmann being “scorned” on social media was irrelevant.

The Post’s spokesperson released a statement including: "From our first story on this incident to our last, we sought to report fairly and accurately the facts that could be established from available evidence, the perspectives of all of the participants, and the comments of the responsible church and school officials.”

In this case, the judge considered seven articles and three tweets from the Post. In total, Sandmann alleged that 33 defamatory statements could be found there.

For what it’s worth, Sandmann—who had originally come to Washington, DC from Kentucky for the anti-abortion March for Life rally— still has pending lawsuits against CNN and NBC.

As reported by Buzzfeed News, Todd McMurty, one of the lawyers representing Sandmann, said, “The law must protect innocent minors targeted by journalists publishing clickbait sensationalized news.” The Sandmann family is planning to appeal the decision.

Here’s the main video, though various versions and angles have since been uploaded to social media: