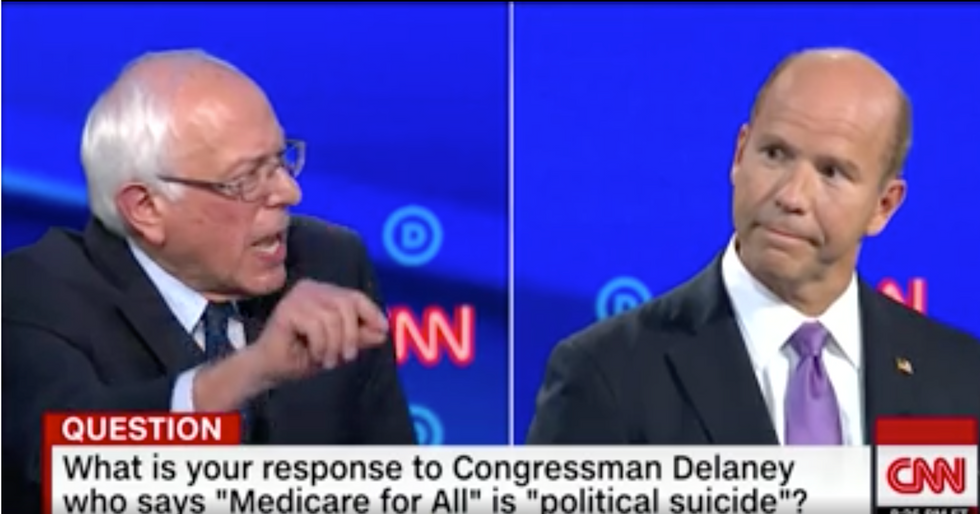 If the first night of the second Democratic primary debate is remembered for anything, it will be for how poorly moderated and uninformative it was. With another ten candidates jammed onto a Detroit stage, the lesser-known moderates--former Maryland Rep. John Delaney, current Ohio Rep. Tim Ryan and Montana Governor Steve Bullock—sought to make their mark by attacking the party’s progressive wing with conservative talking-points about everything from healthcare to climate change, and the moderators, eager to encourage the candidates to engage in heated exchanges that might go viral, were happy to assist them by framing the questions exactly the way a Republican pundit might.

And while it’s possible that there isn’t a formula for managing a good ten-person debate over the course of three hours, CNN moderators Jake Tapper, Dana Bach and Don Lemon made it clear at the onset that they were going to aggressively police the candidates’ allotted time, which resulted in them frequently cutting off points in mid-sentence and led to choppy, hard-to-follow exchanges. Maybe one-in-four viewers had any hope of following what was a lively discussion about healthcare policy because by necessity it was  fought in short, wonky and often fractured soundbytes.

But it was the framing of the questions that stood out for their conservative skew in a Democratic debate. One would think that the single most important issue facing America today wasn’t climate change or the rise of white ethnonationalism or inequality. The question that was asked over and over again, in slightly different formulations, was whether the Democrats had become “too extreme,” and were poised to hand the election to Donald Trump as a result.

Tapper’s very first question, directed to Bernie Sanders, set the tone. “You support Medicare for all, which would eventually take private health insurance away from more than 150 million Americans, in exchange for government-sponsored health care for everyone.” He said. “Congressman Delaney just referred to it as bad policy. And previously, he has called the idea ‘political suicide that will just get President Trump re-elected.’ What do you say to Congressman Delaney?”

He then went on to ask almost all of the other candidates if they, too, supported “raising middle class taxes” to pay for expanding public healthcare. Later, Tapper offered this prompt: “I want to bring in Governor Bullock. We're talking about whether Democrats are moving too far to the left to win the White House. President Trump won your home state of Montana by 20 points. How do you respond, sir?

Dana Bash was obsessed with the idea that a slew of Democratic policies might “encourage more illegal immigration.”

“Mayor Buttigieg, you're in favor of getting rid of the law that makes it a crime to come across the U.S. border illegally. Why won't that just encourage more illegal immigration?” she asked.

“Senator Sanders, you want to provide undocumented immigrants free health care and free college,” she said later. “Why won't this drive even more people to come to the U.S. illegally?”

Later, she turned to Tim Ryan and asked, “Congressman Ryan, are Senator Sanders’ proposals going to incentivize undocumented immigrants to come into this country illegally?”

There were no questions along these lines in the similarly crowded 2016 Republican debates, when the candidates debated dark conspiracy theories popular on Fox News and vied to be the most fervent deniers of anthropogenic climate change.

And while both major parties have moved away from the center over the past 25 years, the evidence is clear that this process has been asymmetric, with the Republicans moving much further to the right than Democrats have moved to the left. Watching Tuesday night’s debate, it would be easy to forget that in most industrialized countries, universal healthcare is the norm, college is free or costs very little and that there’s a scientific consensus that we must pursue aggressive action to stave off the most catastrophic effects of climate change.

And the moderators, particularly Tapper, were so eager to elicit another memorable fight like the one between California Senator Kamala Harris and Former Vice President Joe Biden in the first debate that they all but begged the candidates to rumble. “Governor Hickenlooper,” asked Tapper at one point, “you ran a Facebook ad that warned ‘socialism is not the answer.’ The ad also said, ‘don't let extremes give Trump four more years,’ are you saying that Senator Sanders is too extreme to beat President Trump?”

Tapper quoted Warren saying in the previous debate that politicians who don’t support policies like Medicare for All simply lack the will to fight for it. He went around the room asking every candidate who hadn’t endorsed Medicare for All to respond.

Later, he failed to ignite an exchange between Warren and Sanders, asking the former, “Senator Warren, you make it a point to say that you're a capitalist. Is that your way of convincing voters that you might be a safer choice than Senator Sanders?”

The moderators’ desire to pick fights appears to have made the candidates wary of doing so. Perhaps ironically, there few memorable moments.  At one point, Warren wondered why candidates like Delaney even bother…

At another point, Tim Ryan said that Sanders couldn’t guarantee that his plan’s benefits would be better than those enjoyed by some union workers.

Otherwise, the first night of the second Democratic debate was completely forgettable.