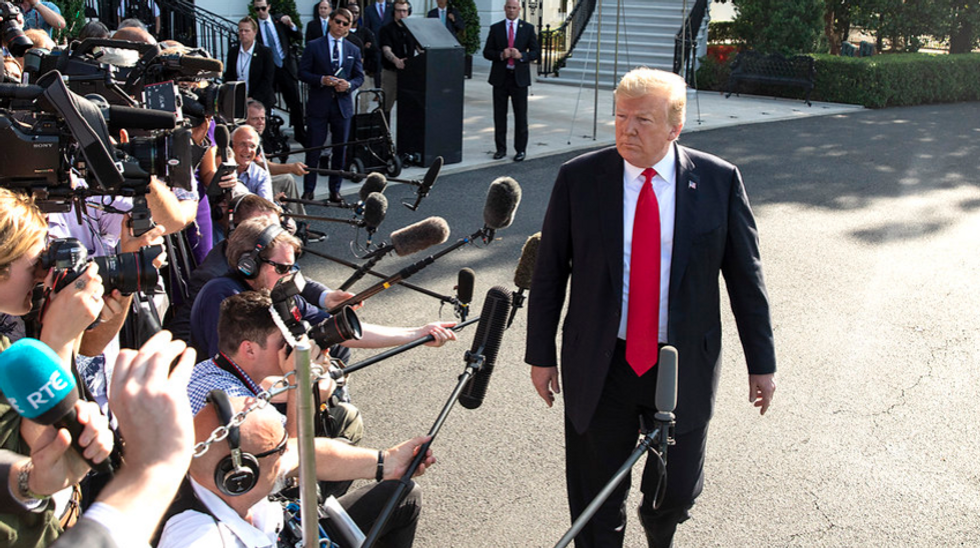 Touting Donald Trump as a "rock star," and genuflecting at the altar of his "greatest show yet," the media showered the president with unnecessary attention all last week in honor of his re-election rally kickoff in Orlando, Florida. The coverage, which was so reminiscent of 2016, raises fresh concerns about whether the news media learned anything from previous campaign about covering a whiny bully like Trump. Will journalists still view him through the lens of celebrity and hold him to almost no substantive standards, while echoing his lies and bogus attacks on Democrats? Coming off monumental failures in 2016, the press seems poised to stumble through another campaign to failure. Especially since, following the 2016 debacle, most in the press refused to concede that mistakes had been made, let alone offer up much serious self-reflection.

It's likely the White House loved how rally week played out, with an avalanche of coverage that mostly just regurgitated Trump's stale, familiar rally speech, which leans heavily on victimhood. One of the media themes regarding Trump's event was that, with his endless attacks on Hillary Clinton, he's stuck in the past. But the same point can be made about the press, which seems determined to hit rewind for 2020. And that means a return of the circus-like, spectacle-type campaign coverage Trump loves.

Last week the press obliged, reportedly sending 500 journalists to Orlando for the indoor event. But why? What exactly was the point of the endless media attention, considering that Trump has held more than 50 lookalike rallies since taking office, and since Trump took the unusual step of officially announcing his re-election bid more than a year ago. Indeed, the White House routinely refers reporters to Trump's re-election campaign for answers to lots of their questions.

Trump talking = news is a ridiculous formula for newsrooms to be using in 2019. Yet last week, we saw ABC News adopt that premise, when the network aired an hourlong prime-time special of, well, Trump talking. There was absolutely no news hook for the unusual programming event, which featured ABC's George Stephanopoulos shadowing Trump over the course of two days last week and recorded Trump lying relentlessly. Not surprisingly, the somnolent show was a ratings flop.

Still, the press seems committed to the idea that every Trump utterance is wildly important and newsworthy. Here's how The New York Times reported Trump's rally: “President Trump delivered a fierce denunciation of the news media, the political establishment and what he called his radical opponents on Tuesday as he opened his re-election campaign in front of a huge crowd of raucous supporters by evoking the dark messaging and personal grievances that animated his 2016 victory.”

Subtract the phrase "opened his re-election campaign," and that paragraph could have easily been published during any month in the last four years. Meaning, we've seen this Trump show over and over and over, to the point where it's quite obviously not news. Weirdly enough, the Times acknowledged that fact in its report—"in the end, it was not so different from the dozens of rallies he has held during the past two years"—yet still treated the rally as front-page news.

In fact, lots of other journalists commented on the ho-hum nature of the event. CNN'sBetsy Klein wrote on Twitter, "I was promised new material." Instead, it was a repeat of 2016. Added The Washington Post's Karen Tumulty, "When Hillary Clinton runs in 2020, Trump is totally ready for her." In others words, Trump hyped the rally as a huge event. The press played along and treated it that way, even though reporters in real time conceded the rally was something of a big fat nothingburger. Guess who walks away the winner in that scenario. To its credit, MSNBC did not carry Trump's rally live Tuesday night, while CNN broke away after five minutes, and Fox News aired the event in its entirety.

And yes, the rally coverage featured the hallmark media whitewashing that so often protects Trump supporters from the harsh glare of reality. Trump was met in Orlando by "cheering and chanting supporters," reported USA Today, and by "thousands of adoring supporters," according to Politico. Both of those cheerful descriptions remind me of the bland, innocuous ways his supporters were often described in 2016. What has traditionally been missing from the nonstop deluge of Trump voter stories? A look into the dark nature of Trump Nation, and an open acknowledgment that his base is often fueled by racism. Trump's candidacy was driven by immigrant-bashing, and so too has his presidency been. But when journalists profile his faithful supporters, acknowledgment of Trump's racist rhetoric rarely comes up. The problem with that type of whitewashing is that the Orlando rally attracted throngs of proud white nationalists, who clearly have become part of the Trump's political coalition, and whose presence was not mentioned in most press reports. And really, just the whole fascist vibe of the rallies is badly underplayed by the press.

Also largely missing from the rally coverage was any mention of the fact that, just prior to the 2018 midterm elections, Trump unleashed a series of similar, rambling, anti-immigration hate events. And they were a political flop, with Democrats going on to win 40 seats in the House.

Trump spouting off doesn’t qualify as news. But will the press ever acknowledge that before 2020?