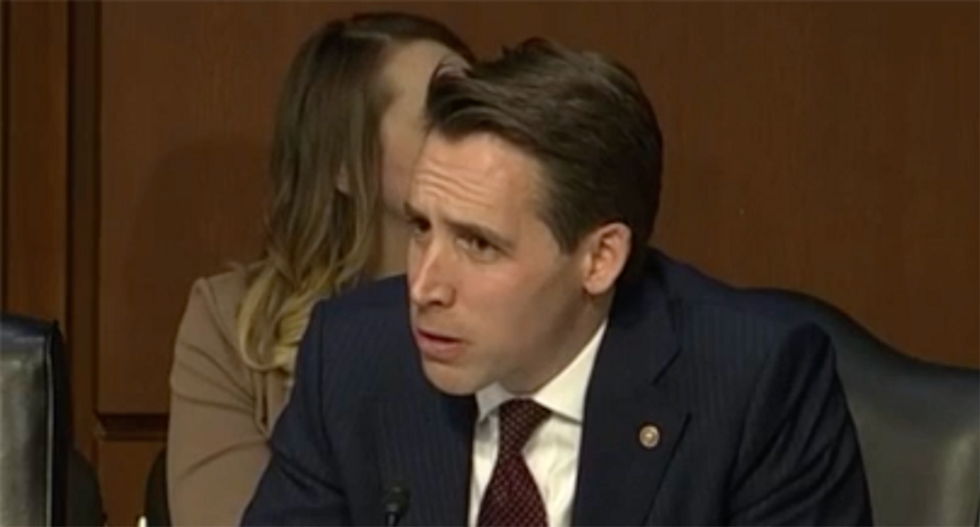 Republican Sen. Josh Hawley is drawing criticism from both the left and the right for a bill they are stressing would reduce First Amendment protections for large tech companies. And this week in Missouri, the state that elected Hawley last year, the Kansas City Star’s editorial board has vehemently condemned the bill in a blistering editorial — denouncing it as a “dangerous assault on the First Amendment” and stressing that Hawley has “waged war on the Constitution."

The Star’s editorial outlines just how Orwellian Hawley’s bill is. The publication notes that the bill, if passed, would revoke Section 230 of the Communications Decency Act of 1996 and allow the federal government to review the practices, guidelines and decisions of online companies such as Facebook, Twitter and YouTube. And it would force tech companies to submit to government audits or reviews in order to show that they aren’t politically biased.

Hawley, in an official statement, complained, “Tech companies get a sweetheart deal that no other industry enjoys: complete exemption from traditional publisher liability in exchange for providing a forum free of political censorship.”

The Star’s editorial board explains that under Section 230, tech companies cannot be held legally liable for most of the digital content posted on their sites. But under Hawley’s bill, the Star warns, online companies would have to show the Federal Trade Commission (FTC) that they have not discriminated against particular candidates, political parties or viewpoints.

“The Hawley measure is such a threat to free speech and free thought that both conservative and liberal groups are condemning it,” the Star explains before going on to cite some specific examples.

The Star’s editorial goes on to note that the Electronic Frontier Foundation (EFF) is equally critical of the bill and has stressed, “It’s dangerous to give a government agency the impossible task of enforcing political neutrality on platforms.”

Other opponents of Hawley’s bill, the Star points out, have been arguing that in order to appear neutral and not risk incurring the wrath of a federal government agency, large tech companies might go to one of two undesirable extremes: they might remove all political speech from their platforms, or they might be afraid to remove expressions of hate and bigotry for fear of being told they are discriminating against particular points of view.

Michael Beckerman, president and CEO of the Internet Association, emphasized that Hawley’s bill “forces platforms to make an impossible choice: either host reprehensible, but First Amendment-protected speech, or lose legal protections that allow them to moderate illegal content like human trafficking and violent extremism. That shouldn’t be a tradeoff.”

The 39-year-old Hawley, who formerly served as Missouri’s state attorney general, was elected to the U.S. Senate when, in the 2018 midterms, he defeated centrist two-term Democratic incumbent Sen. Claire McCaskill (now a contributor at MSNBC). The far-right Hawley is the youngest member of the U.S. Senate.

The Star concludes its editorial by urging Missouri residents to call Hawley’s office and speak out against his bill.

“Let us state plainly what Hawley does not understand: the First Amendment protects the right to speak and worship as one pleases,” the editorial asserts. “It prohibits the government from interfering with those rights.”