Trump says he won't take climate action because it threatens corporate profits: 'I'm not willing to do that' 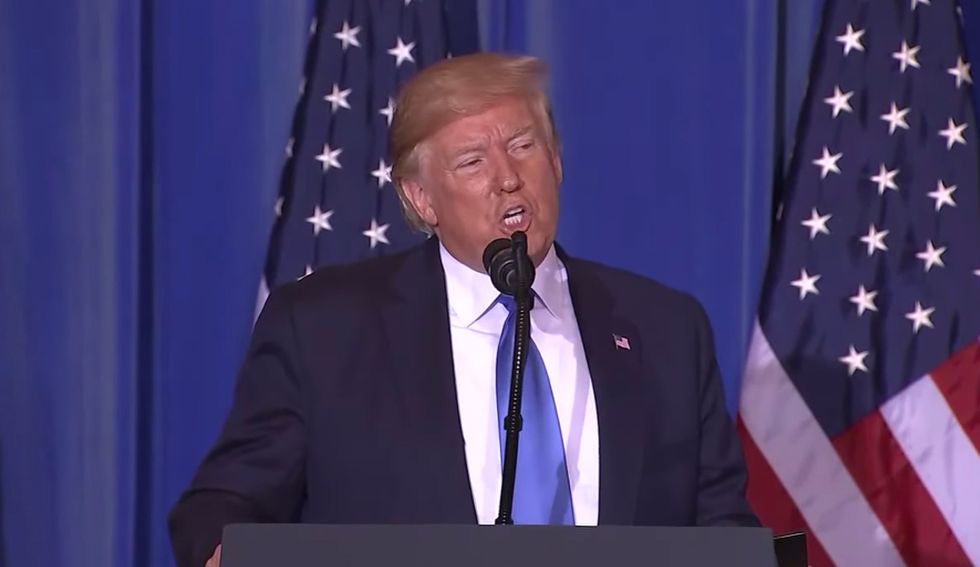 Atmospheric carbon dioxide is at a record high, Europe is in the midst of a hellish heat wave, and extreme weather is ravaging large swaths of the globe, but President Donald Trump dismissed the need for climate action during the G20 summit in Japan on Saturday and falsely claimed that air and water in the U.S. are the "cleanest" they have ever been.

Trump told reporters during a press conference Saturday morning that he is not ignoring the threat of the climate crisis, but he doesn't want to take action to confront the emergency because such a move would threaten corporate profits.

"So we have the best numbers that we've ever had recently," Trump said. "I'm not looking to put our companies out of business."

As the Associated Press reported after Trump claimed earlier this month that the U.S. is "setting records environmentally" with its air and water quality, the "U.S. does not have the cleanest air, and it hasn't gotten better under the Trump administration."

"The U.S. ranks poorly on smog pollution,which kills 24,000 Americans per year," according to AP. "On a scale from the cleanest to the dirtiest, the U.S. is at 123 out of 195 countries measured."

Furthermore, according to a study published last year in the Proceedings of the National Academy of Sciences, tens of millions of Americans are exposed to unsafe drinking water each year.

Trump's comments came amid reports that the U.S. president attempted to pressure allies to weaken the G20 commitment to fighting climate change.

According to Politico, Trump tried "to enlist the leaders of Saudi Arabia, Brazil, Australia, and Turkey in opposing commitments to stand by the Paris climate agreement made at previous G-20 summits."

Trump's efforts were ultimately unsuccessful, as the U.S. remained the sole outlier in refusing to back the summit's climate declaration.

"Under the compromise struck at the last minute on Saturday," Politico reported, "heads of state from 19 of the 20 countries backed the Paris agreement, while the United States secured a carve-out under an 'agree to disagree' framework—the same solution as in previous G20s since U.S. President Donald Trump was elected."