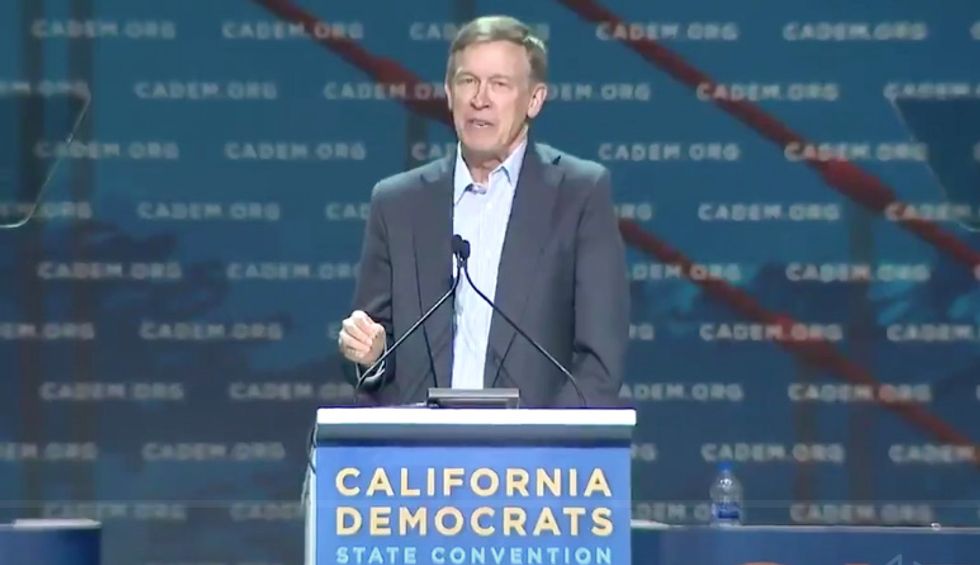 Former Colorado Gov. John Hickenlooper misread the room at the California Democratic Convention Saturday when he tried to convince the conference that moving to the left is the wrong electoral strategy for 2020.

Hickenlooper, who is running for the Democratic nomination for president, told the crowd at San Francisco's Moscone Center that looking to socialism for an answer to the problems the U.S. faces in 2019 is an error that could cost the party its chance at the White House next year.

"If we want to beat Donald Trump and achieve big progressive goals," said Hickenlooper, "socialism is not the answer."

Loud, sustained booing followed the comment, prompting Hickenlooper to tell the crowd they could re-elect President Donald Trump if they weren't "careful."

Presidential candidate @Hickenlooper was booed by some California Democrats when he suggested that “socialism is no… https://t.co/s9lOkGnXJC
— Elex Michaelson (@Elex Michaelson)1559488956.0

The crowd quieted until Hickenlooper began talking about "pragmatism" as the path forward, telling the crowd that big ideas for solving the country's most pressing issues simply aren't feasible.

"We shouldn't try to achieve universal coverage by removing private insurance from over 150 million Americans," said Hickenlooper, as the crowd grew louder. "We should not try to tackle climate change by guaranteeing every American a government job."

Hickenlooper, who's raised 91 percent of his $2 million 2020 campaign haul thus far from big donors—including nearly $35,000 from the healthcare industry—once drank fracking fluid to prove the chemicals weren't dangerous to the environment.

After his remarks to the San Francisco crowd, Hickenlooper told The Hill that by "socialism" he meant any Democratic proposal Republicans would reject.

"Massive government expansions may not be strictly speaking socialism, but trust me: Republicans will make it seem like socialism," said Hickenlooper.

In 2009 and 2010, Republicans called a healthcare bill written by ultra-right-wing think tank the Heritage Foundation "socialism" once the legislation was proposed by then-President Barack Obama, a Democrat.

The response to Hickenlooper's comments, activist Jordan Uhl said on Twitter, was evidence that the candidate doesn't understand the new reality of the party.

"Hickenlooper is polling at 0 percent and was widely booed in his speech today," Uhl said. "100 percent chance he doesn't read the room and stays in the race out of pure hubris."