Here's what Burning Man can teach us about building better communities 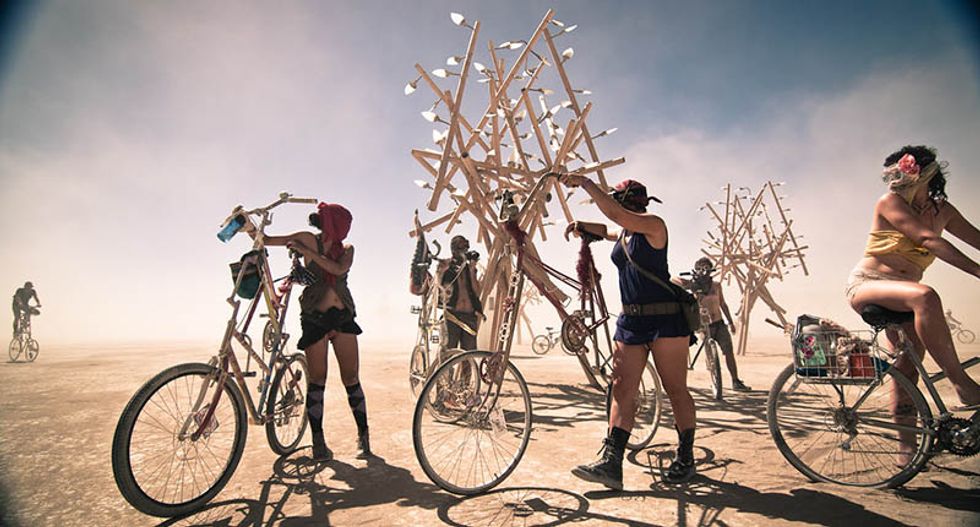 The further we get from the 2016 election, the more it looks like a threshold has been crossed: there is no going back to “usual.” Usual is done. Nobody, on either side of the aisle, really believes that “normal” politics still work. We broke it, and now we have to find a replacement.

But where? What other political models are there?

In 2017 I moderated a panel featuring Burning Man founder Larry Harvey and Roman Burns, a leader of D.C.’s Burning Man Community, on whether there really is a “Burning Man” way to do politics. It was a prescient panel, because I’m increasingly asked, as time passes and the world trembles, if Burning Man—a global cultural force beloved by starving artists and tech billionaires alike—could represent that new model of politics.

As we discovered at that panel, it’s a surprisingly difficult question, and I think the reason people have a hard time answering it is actually more interesting and useful than the answer itself.

What do you want to do for its own sake?

Every year or so, someone will publish an article attacking Burning Man for not being political enough. They say that by not stating whose politics are welcome inside our trash fence, and whose are not, we are part of “the problem.” The idea being—sometimes spoken overtly, sometimes read between the lines—that only political actions have any legitimacy. Literally every human activity must be measured against its political impact, plotted on an axis of political rightness or wrongness. To not understand that is to be naïve.

But in fact Burning Man is an explicit rejection of that very idea: most of us simply do not want to create a world where we have to assign a value to every impulse we have and action we take based on how it measures up against a graph of political legitimacy. That sounds like a horrible way to live.

Instead, Burning Man celebrates and empowers the individual’s ability to pursue their own idiosyncratic visions and goals, simply for the sake of doing them — to learn the skills and get the practice you need to follow their own, often bizarre passions. And then, if you want to, to form communities with other people who are also pursuing their own weird and idiosyncratic visions for no other reason than to do it. Sometimes those goals are expressly political, but mostly they’re not. Most are from the heart. The purest expression of Burning Man’s culture, I think, is to see someone you don’t know anything about doing something strange and amazing that you don’t understand at all, and asking, “Can I help?”

Sometimes yes. There are places in the world where encouraging individuals to pursue their own passions, and form communities around their passions, just for its own sake, is a dangerously political act. Absolutely, there are. What a pity.

But in places where theoretically we are able to pursue our passions freely, especially where “the pursuit of happiness” is enshrined in founding documentation, there is not—or ought not to be—anything political about it. And yet, for hundreds of thousands, maybe millions, of people, Burning Man somehow feels like a subversively political act. Why?

Could it be that we have lost sight of what the difference is between a “political” movement, and a “cultural” one?

Culture is not consumption

I think we have, in large part because—let’s be honest about this—over the last few decades an increasingly large number of “cultural” events and movements have in fact been thinly disguised marketing platforms. Branding has taken over pop and high culture both, and the advice shouted from social media is that now “you are your own brand.” But “brands” cannot form friendships and communities, only people can, and there is a difference between “culture” and “marketing.”

Yet to an increasing extent, the only way to participate in cultural life is to consume a branded lifestyle. As culture reaches the point where nearly every major “legitimate” cultural movement has in some way turned into the equivalent of a pyramid scheme, we are forgetting that it doesn’t have to be this way. We can do things differently.

In fact, as my occasional partner-in-crime (and Burning Man apostate) “Chicken John” Rinaldi and I have written, it’s easy to tell the difference between a “movement” and “marketing”: movements encourage you to connect with them in ways that do not involve consumption.

Don’t just consume music—create it and share it, not for profit but for its own sake. Don’t just read novels, try writing them—not because it’s “on brand,” but because you want to. Don’t pay for a “third space” in which to have conversations about a lifestyle guru’s six-point system, invite friends over to your living room and talk about ideas you can find for free at the public library. Or build a tree house. The closer something is to a true cultural movement, the more it asks you to do without consuming.

Burning Man is often attacked as a consumptive act for the rich because its central event—Black Rock City—charges for tickets to meet expenses and because billionaires try to buy their way in. But this entirely misses the point of how Burning Man was created—by a bunch of people going to public lands to engage in acts of art, with no marketing and nothing to buy. It further ignores how Burning Man spreads: not as a consumptive movement, but a DIY one.

Don’t want to go to Black Rock City? Great! You are actively encouraged to “do Burning Man” yourself, where you are: invite people to a public place, or your backyard, and do what we do for free. You want to use our techniques? Our principles? Great! There are no licensing fees and nobody’s asking for a share of any proceeds. You can’t use our symbols—Burning Man holds a tight trademark on those specifically to prevent them from being used in advertisements or branding initiatives of any kind—but everything else is offered up, as a gift, to help you pursue your own passions and build your own communities. The appeal of Burning Man is not that you have to go to the desert with a ton of equipment to do what we do: it’s that you can do it right where you are, in your own community. There’s nothing wrong with buying things, but all too often we use consumption as a substitute for experience and engagement. That’s a problem, which is why someone who tries to buy their way to a great experience in Black Rock City is considered far less active in Burning Man culture than someone who builds a wooden effigy out of leftover boards and invites friends to burn it together in an abandoned lot.

But does that mean Burning Man is politically irrelevant? I don’t think so: because to the extent that part of the West’s current problem is isolation and hyper-individualism, helping people rediscover and practice the art of building communities based around something other than consumption has tremendous value. Communities like that may not be expressly political, but they are active, not passive, and able to pursue goals that matter to them. Communities like that are far better at acknowledging the humanity of their members, and of cultivating pro-social virtues and values. They encourage a sense of fellow-feeling and cooperation. And the more inclusive they are (and one of Burning Man’s 10 Principles is “Radical Inclusion”), the more opportunities they have to practice these skills, and to reach people they would otherwise never connect with.

Helping people form communities, based on goals outside of consumption, may not be an expressly political act—at least not in what we can consider “the free world”—but it is almost surely a part of any solution to the problems we face today.

Eventually, if we succeed, it won’t feel like politics at all. And it shouldn’t.

Caveat Magister, aka Benjamin Wachs, is the author of The Scene That Became Cities: What Burning Man Can Teach Us about Building Better Communities. For the last ten years, he has written more than 250 articles for the Burning Man website and is one of the leading interpreters of Burning Man. In 2015, Burning Man founder Larry Harvey asked Caveat, along with Burning Man’s director of education, Stuart Mangrum, to sit on the Philosophical Center of the Burning Man nonprofit.