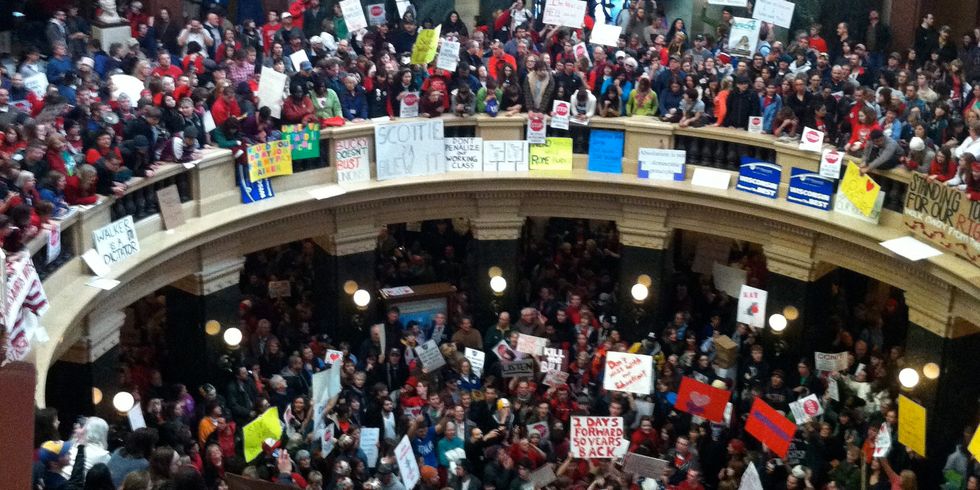 The political press always tends to focus mostly on the marquee race for the White House but that's especially true this cycle, as Donald Trump runs for a second term. He demands attention and his antics enrage his opponents and delight his supporters in equal measure.

But national reporters risk missing the big picture by centering so much of their reporting at the top when many of the most important political battles in 2020 will take place further down the ballot.

Trump is catnip for reporters and their editors, but the dearth of coverage of downballot races didn't begin with his election. As the news media in general faces structural changes—with print circulation declining and much of their work moving into digital spaces that are more difficult to monetize--publishers have cut back on reporters assigned to the state and local government beat. Nevertheless, Trump has arguably worsened the trend by getting so much airtime— one estimate suggested that over the past four years, Trump has taken up, on average, 15 percent of the entire daily news cycle on the three leading cable networks, nearly three times what Obama did.

Here are five reasons why the media should start covering state and even local elections at least as thoroughly as they’re covering Trump's latest angry tweet—and why you should pay close attention and get engaged in these races:

The federal government is unlikely to pass major legislation any time soon.

Thanks to increasing polarization and the ideological insurgency of the Republican Party, Congress has gradually descended over the last decade into a state of complete dysfunction.

Even when Republicans controlled both branches of Congress and the White House — the ripest conditions under which to legislate — they passed just over 500 bills, a third of which were ceremonial. With divided government, legislating has proven all but impossible.

By contrast, states pass thousands of bills per year, sometimes tens of thousands. According to Quorum Analytics, state legislatures are 23 times more productive than Congress, both introducing more bills and getting a higher percentage of them passed. Moreover, state legislation is massively consequential – for example Medicaid expansion, approved by the states, has extended public health coverage to some 13.6 million people.

In general, most incumbents keep getting re-elected for as long as they want. That is true both in Congress and in the 35 state legislatures without term limits, where around 80-90 percent of lawmakers get re-elected and a quarter of them, on average, run unopposed each year. But despite this, sometimes hundreds of seats change hands in American statehouses each year simply because there are so many of them.

A frequently cited statistic is that Democrats lost over 1,000 seats at the state legislative level during Obama's tenure. In 2018, they gained back 300. In the process, Democrats gained control of the state Senates of Colorado, Connecticut, Maine and New York, as well as the Minnesota House of Representatives and both chambers of the New Hampshire legislature — and significantly cut the size of GOP majorities in other states where Republicans remained in charge.

Every legislative seat flipped alters the balance of power and the political landscape of not only that state but the country as a whole. And even small campaign donations can have a big impact in typically low-turnout state and local races.

If you think scandals in Congress are head-turning, they're nothing compared to some of the trouble that state lawmakers have found themselves in recent years.

In 2015, Michigan state Rep. Todd Courser resigned after he used state resources to cover up an extramarital affair with fellow lawmaker Cindy Gamrat, directed his staff to plant fake rumors about him having sex with a male prostitute to try to throw people off the real story, and is now facing trial for perjury. In March, Arizona Rep. David Stringer stepped down after attempting to stonewall a probe into his alleged possession of child pornography and payment of young boys for sex in the 1980s. Washington state Rep. Matt Shea has distributed a manifesto calling for holy war and the killing of unbelievers, and discussed surveilling and torturing liberal activists in a private messaging service. And in May, Tennessee House Speaker Glen Casada announced his intention to resign after text messages showed a top aide using the N-word, doing cocaine in the state Capitol, and boasting about sex acts he performed at campaign functions — often with Casada's knowledge.

All of this barely scratches the surface. State lawmakers have been involved in mayhem that would make even Trump blush.

Even after the 2018 wave, Republicans control a majority of state legislative chambers. And in states where they hold all of the power, they've been jamming through harsh, far-right agendas that are often deeply unpopular with their constituents.

In 2019 alone, more than half a dozen states--including Georgia, Alabama, Ohio, Louisiana, Kentucky, Mississippi, and Missouri--passed new laws effectively banning almost all abortions, a clear attempt to challenge the Supreme Court's precedent on the right to choose. Other GOP-controlled states have been seeking to let people carry guns without a permit--or in bars and churches. Still others—in Wisconsin, Michigan, North Carolina, Missouri and Florida--have moved to preempt the decisions of voters, limiting the powers of incoming Democratic governors, undoing citizen referenda expanding voting rights, and canceling voter-approved anti-corruption initiatives. They’ve also passed dozens of “pre-emption” laws that bar cities with more progressive governments from raising their minimum wages, passing paid family leave ordinances, and enacting new regulations on everything from the environment to Uber and Airbnb.

And for good measure, many of these legislatures also enacted aggressive partisan and racial gerrymanders which, combined with new restrictions on voting, insulate them from democratic accountability.

When they won full control of the New York State legislature, they passed a sweeping expansion of voting rights and enshrined abortion access in state law. Marijuana legalization is expected to follow in short order. In New Hampshire, the newly elected Democratic majorities are working on redistricting reform. Nevada's Democratic legislature just expanded LGBTQ civil rights by abolishing the "gay panic" defense for assaults on gay and trans people. And 16 states have signed on to a compact to nullify the Electoral College.

Even in states where Democrats gained some seats without winning an outright majority, the impact has been significant. In North Carolina, for example, Republicans lost their legislative supermajority last year, giving Democratic Gov. Roy Cooper veto power for the first time. And in Texas, Democrats gained enough votes to block the confirmation of Secretary of State David Whitley, who provoked outrage with a backroom plot to cancel thousands of Hispanic voters' registration.

Even if the media does not give state races the attention they deserve, you can. Find out who your state lawmakers are, when your elections are, and get involved any way you can. The fate of our democracy may well depend on it.