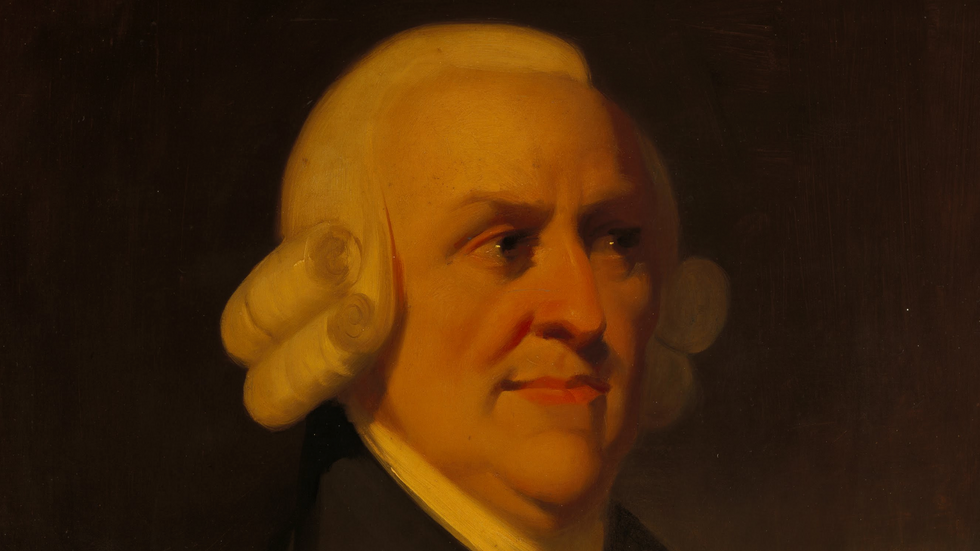 People like to fight over Adam Smith. To some, the Scottish philosopher is the patron saint of capitalism who wrote that great bible of economics, The Wealth of Nations (1776). Its doctrine, his followers claim, is that unfettered markets lead to economic growth, making everyone better off. In Smith’s now-iconic phrase, it’s the ‘invisible hand’ of the market, not the heavy hand of government, that provides us with freedom, security and prosperity.

To others, such as the Nobel prizewinning economist Joseph Stiglitz, Smith is the embodiment of a ‘neoliberal fantasy’ that needs to be put to rest, or at least revised. They question whether economic growth should be the most important goal, point to the problems of inequality, and argue that Smith’s system would not have enabled massive accumulations of wealth in the first place. Whatever your political leanings, one thing is clear: Smith speaks on both sides of a longstanding debate about the fundamental values of modern market-oriented society.

But these arguments over Smith’s ideas and identity are not new. His complicated reputation today is the consequence of a long history of fighting to claim his intellectual authority.

Smith’s first biographer, Dugald Stewart, deliberately portrayed him in the 1790s as an introverted, awkward genius whose magnum opus was an apolitical handbook of sorts. Stewart downplayed Smith’s more politically subversive moments, such as his blistering criticism of merchants, his hostility towards established religion, and his contempt for ‘national prejudice’, or nationalism. Instead, Stewart shined a spotlight on what he believed was one of ‘the most important opinions in The Wealth of Nations’: that ‘Little else is requisite to carry a state to the highest degree of opulence from the lowest barbarism, but peace, easy taxes, and a tolerable administration of justice; all the rest being brought about by the natural course of things.’

Stewart’s biography (first delivered as an eulogy in 1793, then published in 1794 and 1795) appeared in the wake of major events that terrified British audiences: the French Revolution of 1789, the Reign of Terror that followed and the sedition trials that followed in both England and Scotland. As the British historian Emma Rothschild has shown, Stewart’s depiction of Smith’s ideas cherrypicked in order to imbue political economy with scientific authority. She writes that he wanted to portray political economy as ‘an innocuous, technical sort of subject’, to help construct a politically ‘safe’ legacy for Smith during politically dangerous times. Stewart’s effort marked the beginning of Smith’s association with ‘conservative economics’.

Smith would soon earn a reputation as the father of the science of political economy – what we now know as economics. Initially, political economy was a branch of moral philosophy; studying political economy would equip future statesmen with the principles for making a nation wealthy and happy. From the 1780s to the mid-19th century, The Wealth of Nations was often used as a textbook in political economy courses in the US. Even when new textbooks and treatises on political economy were published, they were often compared with ‘the standard treatise on the Science of Political Economy’, in the words of one 19th-century American scholar.

That founding-father status took Smith’s ideas far. Politics became the arena in which his ideas – and economic ideas in general – were tried, tested and wielded. Politicians found much in Smith to support their beliefs, but the ‘invisible hand’ had yet to become a catchphrase of capitalism.

In the US, congressmen invoked Smith’s name to bolster their positions on the tariff. In 1824, George McDuffie of South Carolina defended his position on free trade ‘upon the authority of Adam Smith, who … has done more to enlighten the world of political economy than any man of modern times. He is the founder of the science.’ By the second half of the 19th century, Smith was being dubbed the ‘apostle of free trade’. Even those who championed protectionism appealed to his ideas, often only to delegitimise them. ‘The chief object of protection is to develop the home trade,’ one congressman declared in 1859, ‘and in this it has the sanction of the apostle of free trade, Adam Smith himself.’

This ‘sloganising’ of Smith’s name and ideas is perhaps most recognisable to us today in the phrase ‘the invisible hand’. Its popularity as a political catchphrase stems from the rising so-called Chicago School economists in the mid- to late-20th century, of whom Milton Friedman is a prominent example. Smith’s metaphor of the invisible hand was a central theme in much of Friedman’s public-facing works – op-eds, television shows, public debates, speeches and bestselling books. In 1977, Friedman described the invisible hand as representing the price system: ‘the way in which voluntary acts of millions of individuals each pursuing his own objectives could be coordinated, without central direction, through a price system’. This insight marked The Wealth of Nations ‘as the beginning of scientific economics’. What is more, Friedman also linked Smith with American founding values. Thomas Jefferson’s Declaration of Independence was the ‘political twin’ of Smith’s Wealth of Nations, according to Friedman in 1988, and economic freedom was a prerequisite for political freedom in America.

In popular imagination, Smith’s invisible hand has become so strongly associated with Friedman’s openly conservative economic agenda that people often take for granted that is what Smith meant. Many scholars have argued the contrary.

Indeed, it is easy to forget that Smith – who he was, is, and what he stands for – has been invented and reinvented by different people, writing and arguing in different times, for different purposes. It can be tempting to dismiss some past interpretations and uses of Smith as quaint, superficial, misleading or wrong. But they also reveal something about how and why we read him. Smith’s value has always been political, and it’s often politicised. But much of that value stems from assumptions about the neutrality and objectivity of the science he invented when, in fact, those assumptions are ones that his later readers projected onto him. Smith was a scientist, no doubt, but his ‘science of man’ (in David Hume’s phrasing) was not value-free. At the same time, we should be wary of reading his science through the lens of a single normative value – whether that is freedom, equality, growth or something else.

Adam Smith’s works remain vital because our need to identify and understand the values of a market society, to take advantage of its unique powers and temper its worst impulses, is as important as at any time in the previous two centuries. Economic ideas carry immense power. They have changed the world as much as armies and navies. The extraordinary breadth and sophistication of Smith’s thought reminds us that economic thinking can not – and should not – be separated from moral and political decisions.