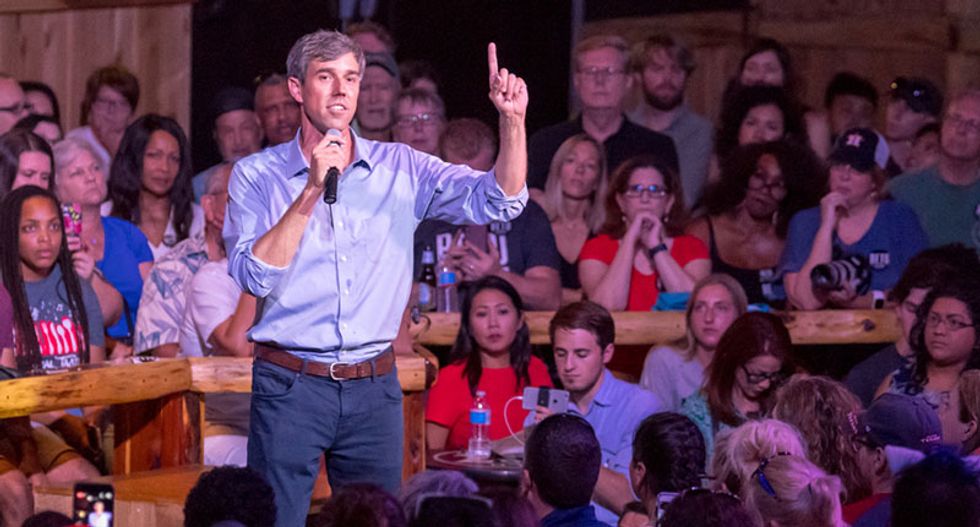 The plan, the third policy rollout of O'Rourke's campaign, sets ambitious goals: increasing the number of registered voters in the United States by 50 million, pushing the turnout rate to a record-high 65% and driving 35 million new voters to the polls in 2024, the biggest increase ever in a presidential election. To get there, O'Rourke offers a three-prong approach centered on increasing voter participation, eliminating obstacles to voting and "rebuilding confidence in our democracy."

"The only way to make progress is if every single American is empowered to vote — and those who have historically been drawn out of our democracy are able to make their voices heard so that this country can live up to its full promise and potential," O'Rourke said in a statement.

O'Rourke's proposal draws inspiration from House Resolution 1, the sweeping platform that has been a priority of the new Democratic majority in the U.S. House but faces little chance in the GOP-controlled Senate.

To expand voter participation, O'Rourke calls for a national transition to same-day voter registration and automatic voter registration when any citizen visits a government office, with pre-registration for 16- and 17-year-olds. Arguing that "permanent incumbency" depresses participation, the plan also calls for a constitutional amendment instituting term limits — 12 years for members of both the U.S. House and Senate, as well as 18 years for U.S. Supreme Court justices. The latter is a new position for O'Rourke, who's long supported term limits in Congress.

To remove barriers to the ballot box, O'Rourke proposes circumventing states' restrictive voter ID laws by passing a bill to let people vote without ID as long as they sign a "sworn written statement of identity." He wants legislation to "make clear that even seemingly race-neutral election regulations are unlawful when they result in disproportionate impact on racial minorities." O'Rourke also calls for legislation to protect people from being wrongfully removed from state's voters rolls — a salient issue in Texas, where former Secretary of State David Whitley failed to gain state Senate confirmation even after he settled legal challenges by scrapping a list questioning the citizenship status of almost 100,000 voters.

Finally, to spur more public confidence in elections, O'Rourke pitches things like paper ballots and independent redistricting commissions, in addition to a host of campaign finance reforms. Long an opponent of political action committees, O'Rourke wants to prohibit them from giving to campaigns and further limit the size of donations that can be made to issue-specific PACs. On campaign finance, the plan also calls for encouraging low-dollar donations by making contributions up to $500 tax-deductible and matching those donations with public funds. His plan would also require campaigns to disclose donations over $1,000 within 48 hours.

O'Rourke's proposal would additionally put a lifetime ban on federal lobbying by former federal elected officials and prohibit their top staffers from lobbying for a certain period of time. Those former officials also would not be allowed to immediately go work for an entity their public office regulated.

O'Rourke was is set to promote the proposal during a town hall Wednesday evening in Georgia, which he is visiting for the first time as a 2020 contender. The state was a battleground for voting rights last year, when Democrat Stacey Abrams lost the governor's race and refused to concede to Republican Brian Kemp, who served as the state's top elections official throughout the contest. Abrams emerged from the gubernatorial race as a national advocate on voting issues, and many 2020 hopefuls, including O'Rourke, have lavished praise on her for persisting after what they saw as an unfair election.

The plan is O'Rourke's latest policy proposal since launching his bid in mid-March. He previously put out proposals to fight climate change and overhaul the U.S. immigration system.

Disclosure: The Texas Secretary of State has been a financial supporter of The Texas Tribune, a nonprofit, nonpartisan news organization that is funded in part by donations from members, foundations and corporate sponsors. Financial supporters play no role in the Tribune's journalism. Find a complete list of them here.