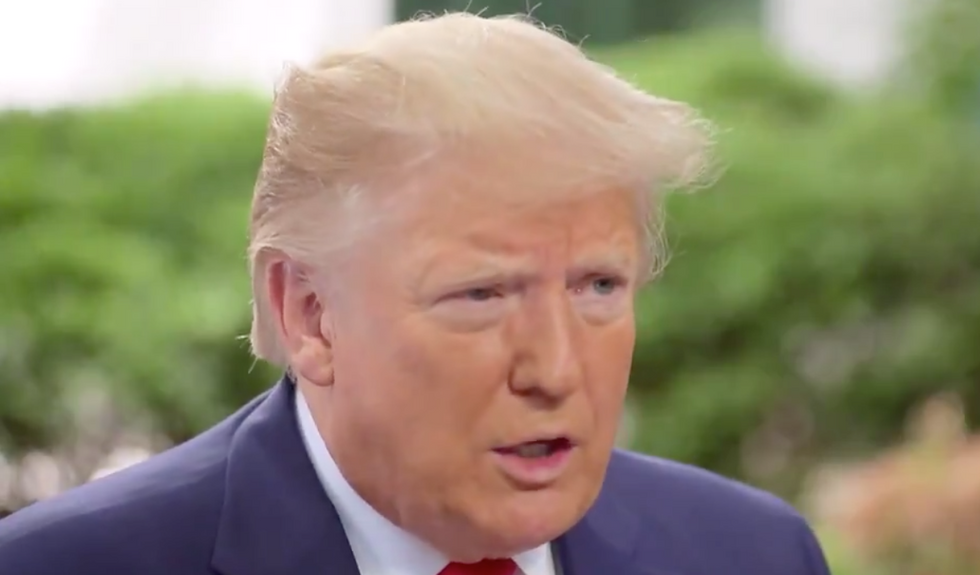 In a new interview with Chuck Todd of NBC News, President Donald Trump gave extensive details about the process that led him to abort airstrikes against Iran that were on the brink of being launched Thursday night.

Reports broke late Thursday night that Trump has ordered the attack in response to Iran's destruction of a U.S. drone on Wednesday. Those reports indicated that Trump had given the go-ahead for the attack, but then changed his mind. In the interview with Todd, Trump suggested he had never officially given the order to go ahead.

"Nothing is greenlighted until the very end, because things change," Trump said. "But we had something ready to go, subject to my approval. And they came in, they came in about a half an hour before, they said 'Sir, we're about ready to go.' I said, 'I want a better definition...'"

"Planes in the air?" asked Todd.

"No, no, we're about ready to go," Trump said. "No, but they would have been pretty soon. And things would have happened to a point where you wouldn't turn back or couldn't turn back, so they came and they said, 'Sir, we're ready to go, we'd like your decision.' I said, "I want to know something before you go. How many people will be killed?' In this case, Iranians. I said, 'How many people are going to be killed?' Uh, 'Sir, I'd like to get back to you on that.' Great people, these generals. They came back, said, 'Sir, approximately 150.' And I thought about it for a second, and I said, you know what, they shot down an unmanned drone, a plane, whatever you want to call it, and here we are sitting with 150 dead people that would have taken place probably within a half an hour after I said, 'Go ahead.' And I didn't like it. I didn't think it was proportionate."

Now, since Trump is an unrepentant liar, it's always important to treat his stories with high levels of skepticism. It's hard to know how accurate this story is. And on the one hand, if it is relatively accurate, it shows welcome restraint and discretion from a president who genuinely does seem to want to avoid a disastrous war with Iran, despite his top advisers' clear inclinations to escalate conflict.

But as national security lawyer Bradley Moss pointed out, the process Trump described sounds haphazard and reckless, leaving the ultimate momentous decision up to instinct or luck. So either Trump is overseeing an amazingly ill-conceived decision-making process, or he's outright lying about a moment of global significance. Since the Pentagon is currently in transition between two unconfirmed acting secretaries of Defense, and the country hasn't had a Senate-confirmed Defense secretary since the beginning of the year, it's not hard to imagine that the military decision-making process is warped.

"That we were this close to the final 'go order' and Trump claims that he had never previously been told of an anticipated casualty figure reflects either a total breakdown in the briefing process or Trump is actively misleading people on what he knew and when," Moss said on Twitter.

EXCLUSIVE: In an exclusive interview with Chuck Todd, President Donald Trump says he hadn’t given final approval to… https://t.co/OLlulUnaZz
— Meet the Press (@Meet the Press) 1561135825.0