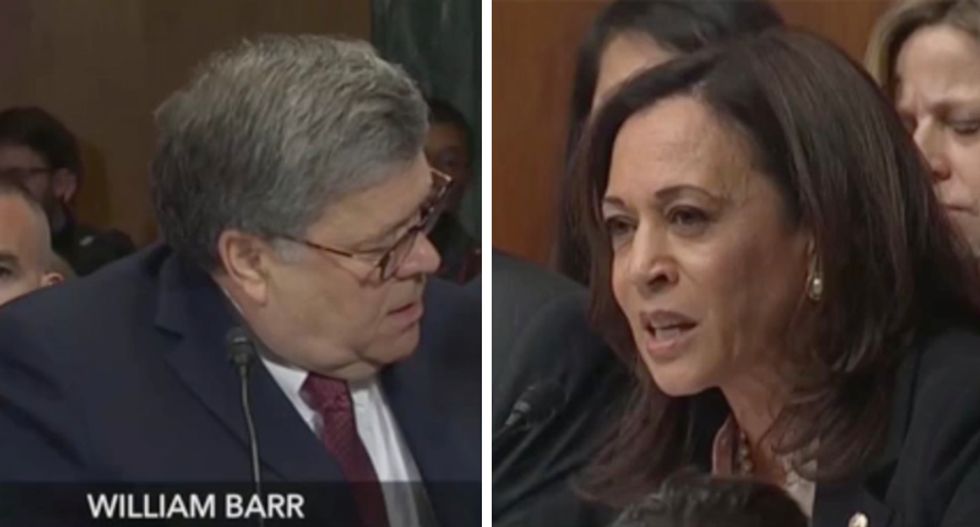 Harris set the tone right away, asking Barr if “anyone at the White House suggested that you open an investigation of anyone?”

Barr waffled on the question, asking Harris to repeat it.

“Has the president or anyone at the White House ever asked or suggested that you open an investigation of anyone, yes or no, please, sir,” Harris asked.

“I mean there have been discussions of matters out there that they have not asked me to open an investigation, but—“ Barr replied as Harris cut in.

“Perhaps they suggested?” She asked.

“Hinted? Inferred? You don't know?” Harris pressed. The California senator then asked whether Barr or Deputy Attorney General Rod Rosenstein personally reviewed all of the underling evidence in the Mueller report.

“We accepted the statements in the report as factual record,” Barr replied. “We did not go underneath it to see whether or not they were accurate.We accepted it as accurate.”

“Did anyone in your executive office review the evidence supporting the report?” Harris wondered.

“No. Yet you represented to the American public that the evidence was not quote sufficient to support an obstruction of justice offense?” Harris asked. “As the attorney general of the United States, you run the United States department of justice, if in any U.S. Attorney's office around the country, the head of that office, when being asked to make a critical decision about — in this case — the person who holds the highest office in the land and whether or not that person committed a crime, would you accept them recommending a charging decision to you, if they had not reviewed the evidence?”

“Well, that's a question for Bob Mueller,” Barr replied. “He’s the U.S. Attorney. He's the one who presents the—“

Harris cut him off, explaining to Barr that he’s the one who made the decision not to charge the president. “You said it was your baby, what did you mean by that?” Harris asked.

“It was my baby to decide whether or not to disclose it to the public,” Barr said.

“And who had the power to make the decision about whether or not the evidence was sufficient to make a determination of whether there had been an obstruction of justice?” Harris pressed.

“Prosecution memos go up to the supervisor, in this case, it was the attorney general and the deputy attorney general, who decide on the final decision,” Barr replied. “And that is based on the memo as presented by the U.S. Attorney's office.”

“You made it clear, sir, that you have not looked at the evidence and we can move on,” Harris said, turning to whether or not Barr will recuse himself from the investigations referred to the DOJ by Mueller’s office.

“I don't see any basis for it,” Barr said, claiming that he’s “already consulted with them” about the Mueller case.

“Have you consulted with the career DOJ. Ethics officials about the appropriateness of you being involved or recusing yourself, on the 14 other investigations that have been referred out?” Harris asked.

“On what basis?” Barr demanded.

“I think the American people have seen quite well are biassed in this situation and are not objective and that would be arguably be the conflict of interest,” Harris replied.

Watch the full exchange below: