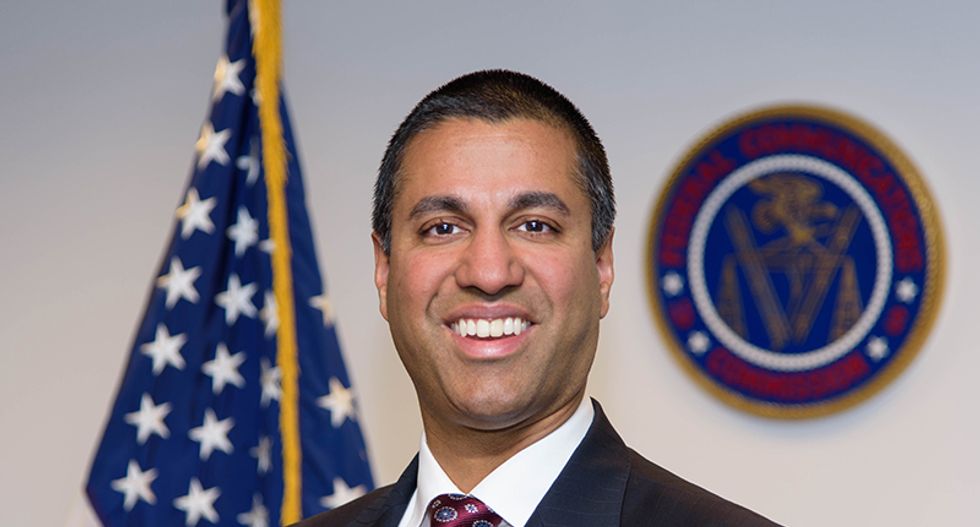 "Ajit Pai doesn't even try to pretend that he works for the public," said Fight for the Future deputy director Evan Greer. "He seems to take smug pleasure in being a blatant telecom shill."

Pai's approval followed what Engadget put as "a fresh round of promises [from the companies] to win regulators' hearts."

Those promises—which the advocacy groups say do nothing to prevent the harms of the proposed merger—include Sprint divesting from Boost Mobile; the deployment of nearly-nationwide 5G network within 6 years; expanding high speed wireless service; and facing billions in fines if the agreement is violated. Pai's statement also referenced the "prior commitment not to raise prices for three years" made by the two companies.

"In light of the significant commitments made by T-Mobile and Sprint as well as the facts in the record to date, I believe that this transaction is in the public interest and intend to recommend to my colleagues that the FCC approve it," Pai said in a statement.

Sprint and T-Mobile are playing the typical game of making a bunch of unenforceable promises (such as rural broadba… https://t.co/OOvZC4wVAn
— Demand Progress (@Demand Progress) 1558377110.0

"Even with the conditions announced today," said Phillip Berenbroick, senior policy counsel at Public Knowledge, "the merger continues to be illegal under the antitrust laws and contrary to the public interest."

Among the key concerns advocacy groups have raised about the merger is that consumers would face higher prices, and the new committments do nothing to quell those concerns.

"Further, chairman Pai's rate regulation condition is limited to only three years," Berenbroick added. "Consolidating the wireless market from four nationwide competitors down to three nationwide competitors will lead to enhanced market power for the remaining carriers, leading to higher prices for all wireless subscribers both during the first three years, and long after."

A real problem is what Wood called a "affordability crisis," which "leads to an adoption gap that makes it hard for poorer people to get online, and it keeps people of color disconnected more often than other demographic groups."

The proposed merger still faces hurdles. It needs a full FCC vote and faces scrutiny from the Department of Justice and state attorneys general.

If they fail to stop "this massive and anti-competitive horizontal merger," said Wood, "then our antitrust laws are meaningless."